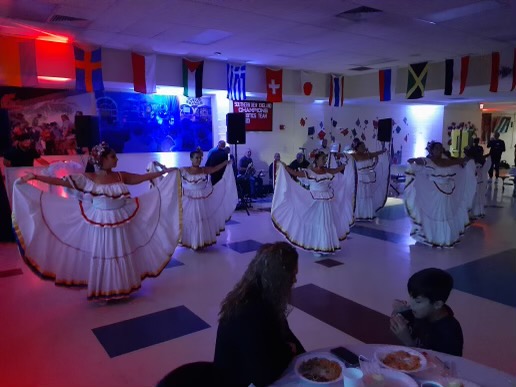 It was Latin Night at Masuk. Guests enjoyed dishes of pulled pork, rice and other fare prepared by Antojitos Colombianos, a restaurant in Hartford, and Silva’s Blessed Hands: Edna & Fausto Silva Catering. 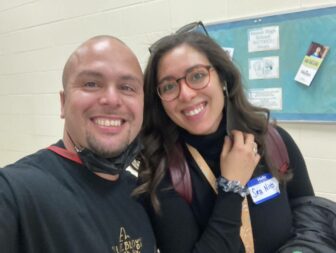 “We want to show our student population we embrace all diversity,” said Joel Castillo, a Spanish teacher. “Our Hispanic population has grown at Masuk. I think that’s what increased the support for this event.”

Participation for the annual dinner/dance increased from 65 to 222 within two years, according to Castillo.

On Tuesday, students served as hostesses, waitstaff and prepared plates during Latin Night. Some teachers, family members and other school staff also volunteered. 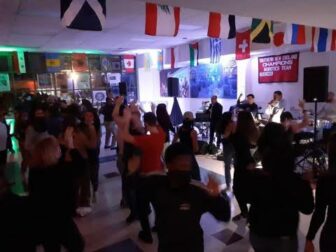 Students, parents and school staff dance to the music during Latin Night at Masuk High School.

Castillo said students decorated the cafeteria with flowers and artwork for the occasion — an annual celebration of Hispanic Heritage Month — in addition to creating the menu, selling tickets and promoting Latin Night on social media.

This is Nieto’s first year teaching at Masuk, so she was taking part in her first Latin Night.

“I think it’s awesome,” she said. “We live in such a global community. It’s great to be able to interact in a diverse world. I had so many kids come up to me saying they had an awesome night and ‘I can’t believe this is Masuk.'”

The darkened cafeteria had the feel of a night club.

Castillo expressed his gratitude to everyone who made the evening possible, including the Peña family, who donated bottled water, and the Rimac family, who brought Peruvian food. School Spirit students also served as volunteers.

“My wife made desserts and the my brother was serving,” Castillo said of the adult volunteers. 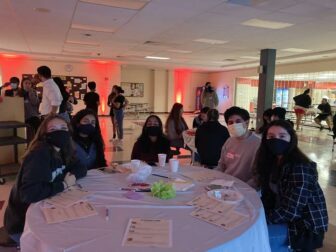 Masuk students did everything for Latin Night, from promotion and decorations to greeting guests and serving the food.

“This was a community run event,” Nieto added.

Castillo said Principal Steve Swensen, Assistant Principal Lisa Peterson and the entire administration of Masuk showed tremendous support in the coordination for the event, which was moved from Friday to Tuesday night this year to avoid scheduling conflicts.