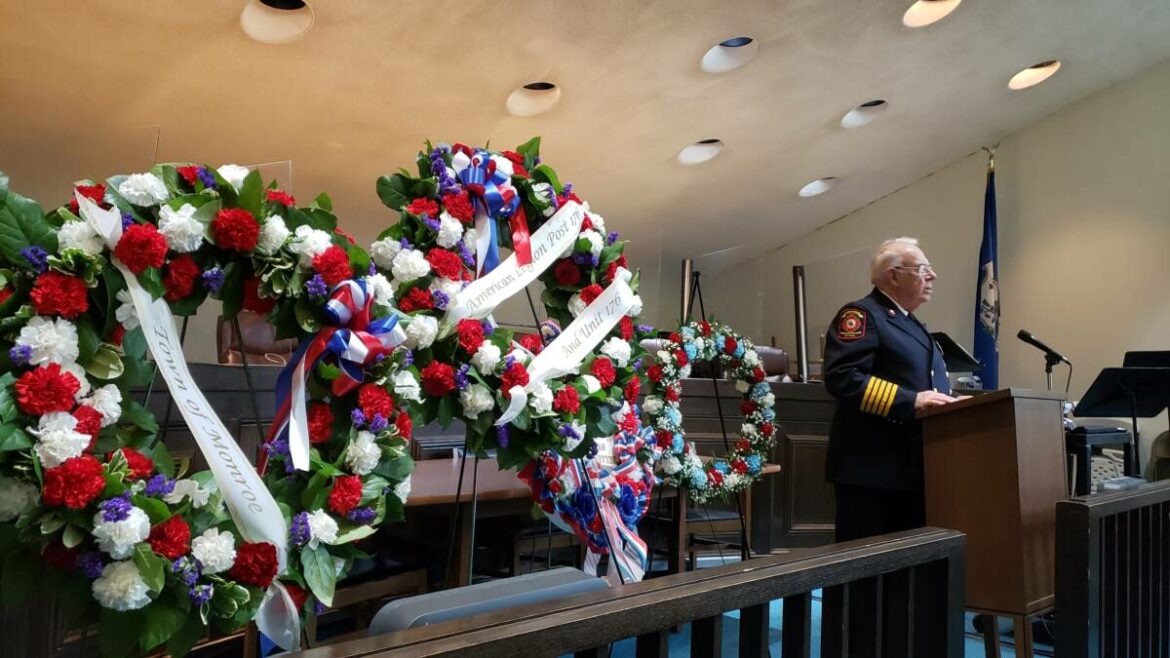 MONROE, CT — Townspeople enthusiastically planned Monroe’s Memorial Day Parade after losing a year to the COVID-19 pandemic, only for Sunday’s steady rain to wash the event away.

Rather than the spectacle of floats, fire trucks and military vehicles heading north on Monroe Turnpike, along with veterans and community groups on the march, close to 100 people assembled in the Council Chambers of Monroe Town Hall for an indoor ceremony honoring the men and women who gave their lives fighting for our freedom. 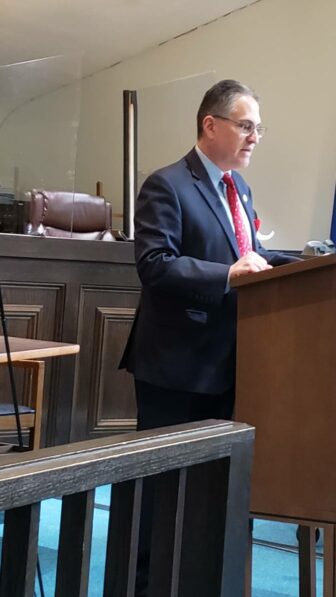 “Today’s weather did not exactly cooperate,” First Selectman Ken Kellogg said from the podium. “But today is a beautiful day. We’re together once again to honor the veterans who served our country for our freedoms.”

Kellogg noted how residents just lived through the most significant health crisis in recent history, when the government routinely made decisions on things such as when businesses could open, when people were allowed out of their homes, and how they could gather.

“We endured these sacrifices for the good reason of health and safety,” Kellogg said.

Then he asked the audience to think of the places in the world where the freedoms Americans hold dear do not exist at all.

The first selectman expressed “enormous gratitude” to all our veterans. “All of you, on behalf of Monroe, I salute you and I thank you,” Kellogg said.

Blumenthal said it was a “little bit of a smaller crowd, but there is a feeling of warmth and intimacy in this gathering that is very special.” 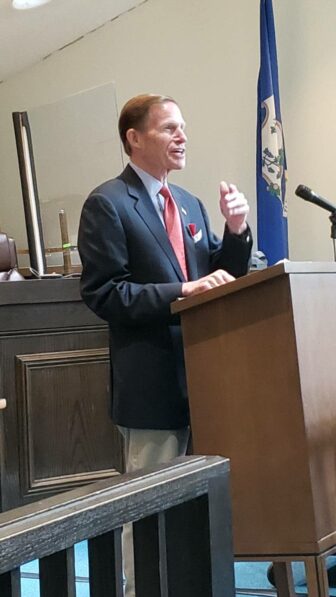 “I was looking at the line of march on your program and … in my mind’s eye I could see them marching past the viewing stand with all of the color and spirit — children, veterans,” Blumenthal said. “It’s such a wonderful parade and it gives us something to look forward to next year, just as last year we looked forward to being together again.”

“The first selectman is absolutely right, the freedom that we feel today, I find really just exhilarating,” he continued. “Even though we are indoors, not having to wear a mask, not having to socially distance, not having to feel constrained and fearful about what the future will bring, I think it says something very profound about our country: that we are resilient. That we come together at times of crisis.”

Blumenthal said those freedoms would be impossible without our veterans.

“We should never take for granted our veterans and, as much as we honor them today in word and rhetoric, we should also honor them in deed and action,” he said.

Blumenthal, who serves on the Senate’s Veterans Affairs and Armed Services committees, touted efforts to improve educational opportunities by expanding the G.I. Bill and of opportunities to provide better health care for veterans.

The senator said the veterans hospital in West Haven is a world class facility, but the building dates back to the 1950s and should be replaced.

“All these tangible ways. Our veterans deserve and need those benefits. Not as a handout, they’ve earned them. They deserve them,” Blumenthal said. “On this day, I always feel it is a time to recommit ourselves to our veterans in the memory of the fallen.”

Blumenthal asked all of the veterans in the room to raise their hands, so everyone could thank them for their service. Applause filled the chambers for the veterans, as well as other men and women in uniform, including town police officers, firefighters and emergency medical service personnel. 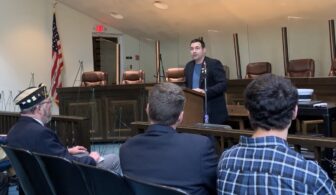 Scott is newly elected to his position, and he said his two daughters were excited at the prospect of walking in the parade for the first time.

“My daughters said they want to walk with heroes and they are definitely disappointed today — no doubt,” Scott said. “But the reason why we’re here is to show and honor those who gave the ultimate sacrifice.” 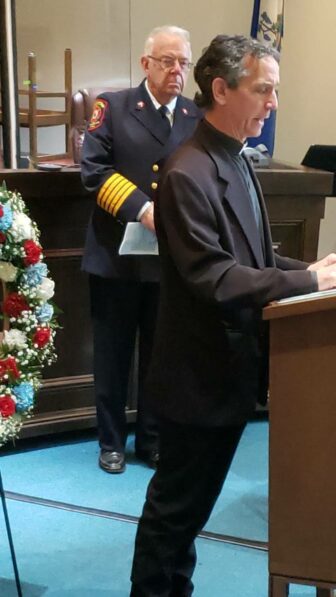 David York, chaplain for the fire department, left, stands behind The Rev. Henry Hoffman, pastor of St. Jude Parish, as Hoffman leads everyone in prayer during the Memorial Day ceremony at Town Hall Sunday. Photo by Jan Larsen

Scott spoke of how Gold Star families are a daily reminder of the sacrifice of the men and women in the armed forces, and expressed admiration for their strength.

Scott said his grandfather was an intelligence officer during World War II, but could not join the fighting because of deteriorating eyesight. His grandfather says one of his biggest regrets is not having been able to fight side-by-side with the men he trained with, according to Scott.

He said veterans’ sacrifice is something residents should keep in mind, not only during Memorial Day, but for 365 days a year.

David York, the town fire department’s chaplain, served as the master of ceremonies and The Rev. Henry Hoffman, pastor of St. Jude Parish, gave the invocation and benediction.

“On this Memorial Day, O God, grant peace to the souls of all those soldiers who have died in war,” Hoffman said. “We remember the tears and grief of their families, the pain of mothers, wives, husbands and children who have lost precious loved ones.” 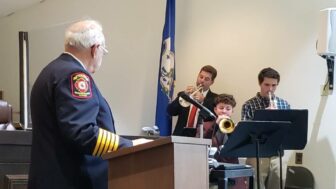 “To build a meaningful memorial to them, we ask and pray to you, O God, that you give us all the grace to work for peace around the world, so that no more lives of sons, daughters, husbands, wives, fathers, nor mothers are taken by war.”

“May God hold in the palm of his hand, the souls of the departed and grant them eternal peace in heaven.”

The Masuk High School Trumpeters, juniors Ryan Barringer and Mila Planas played the “National Anthem”, “America the Beautiful” and “Taps” during the ceremony.

There was also a presentation of wreaths from the organizations who were able to attend. 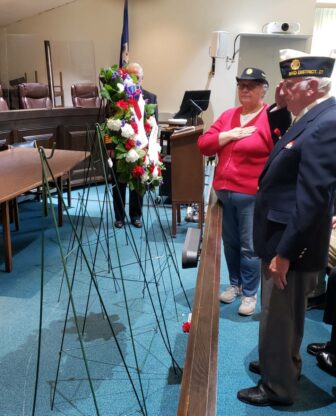 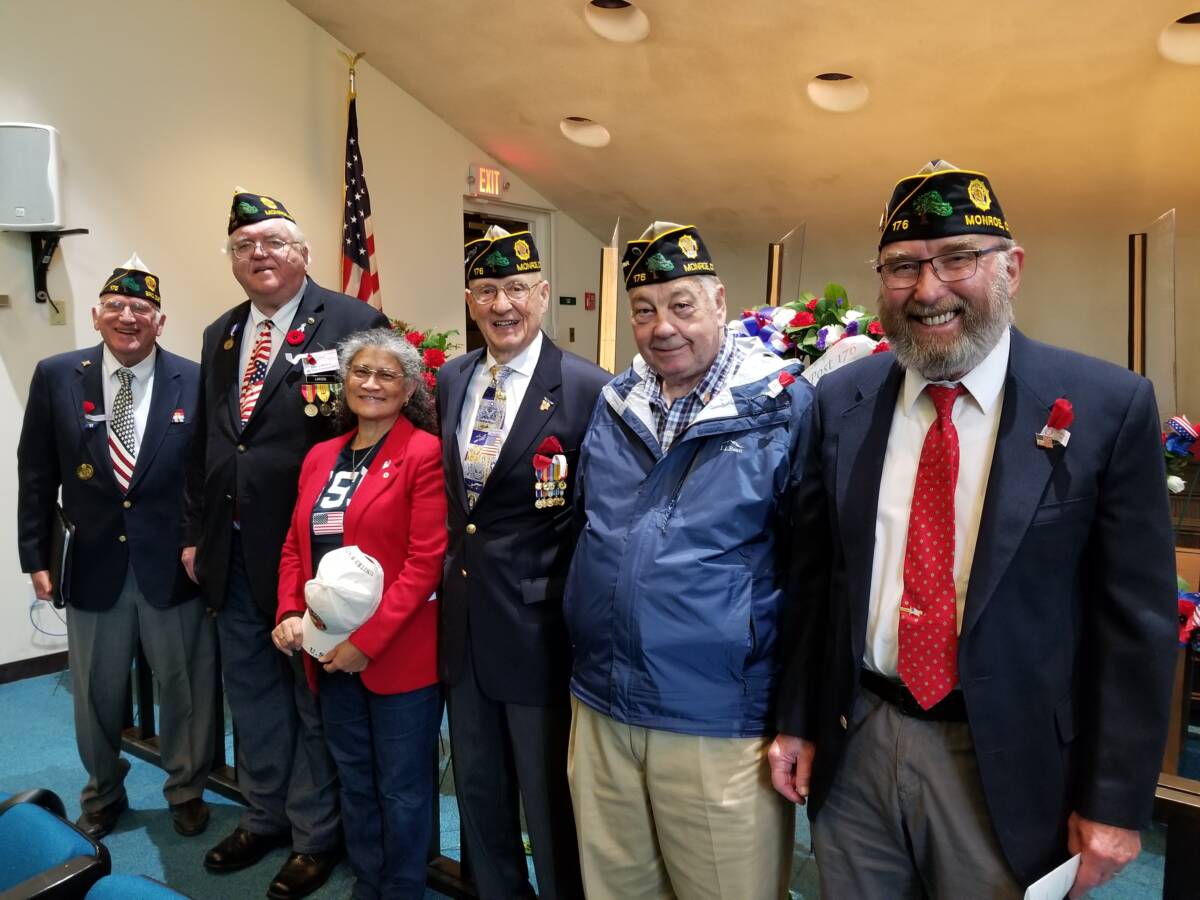 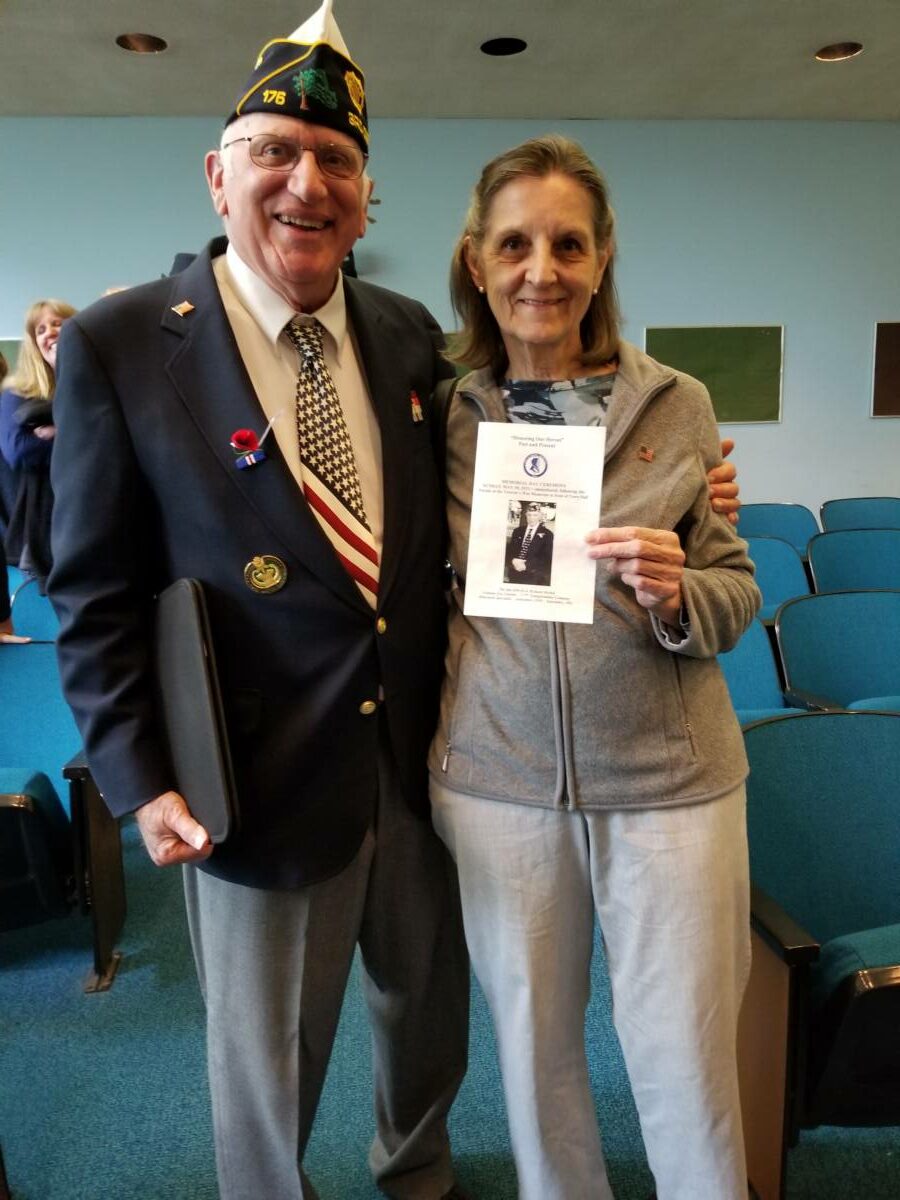 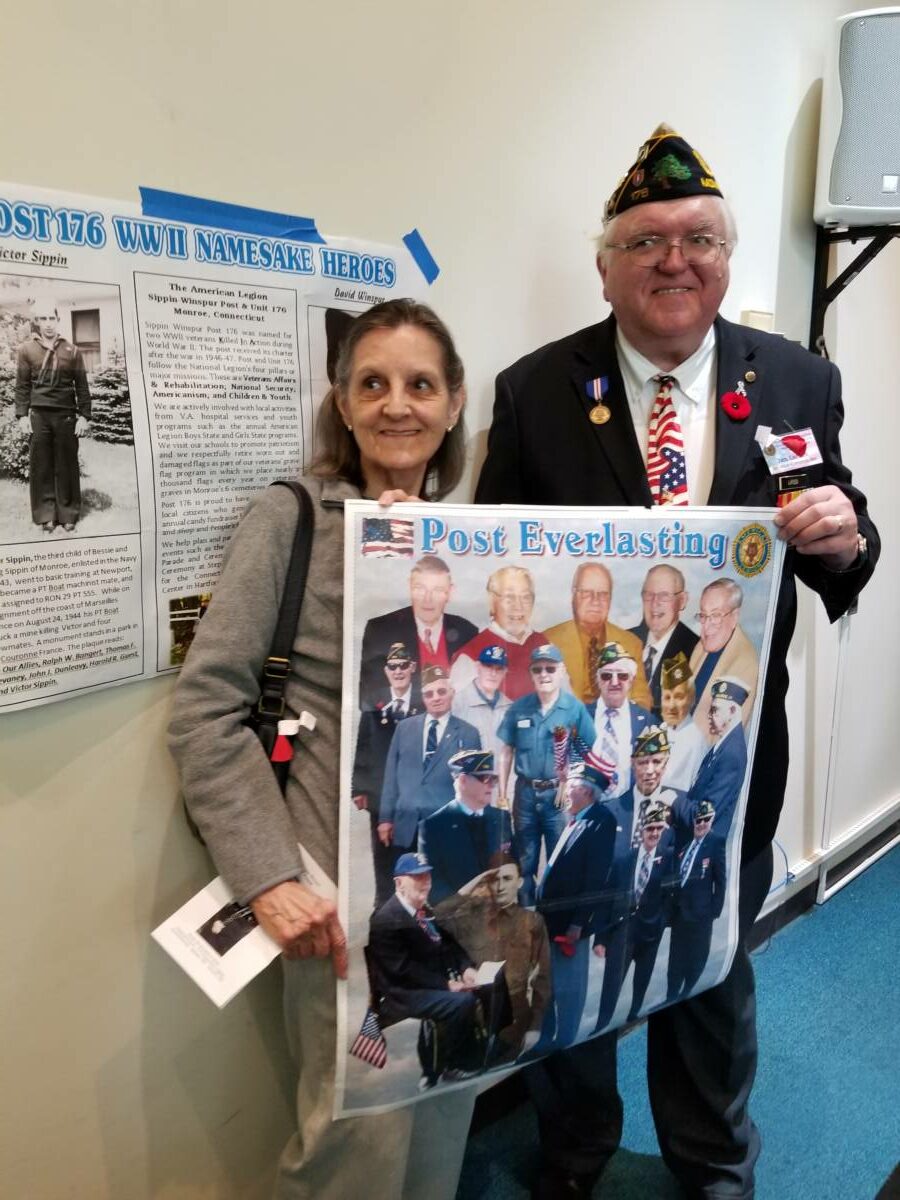 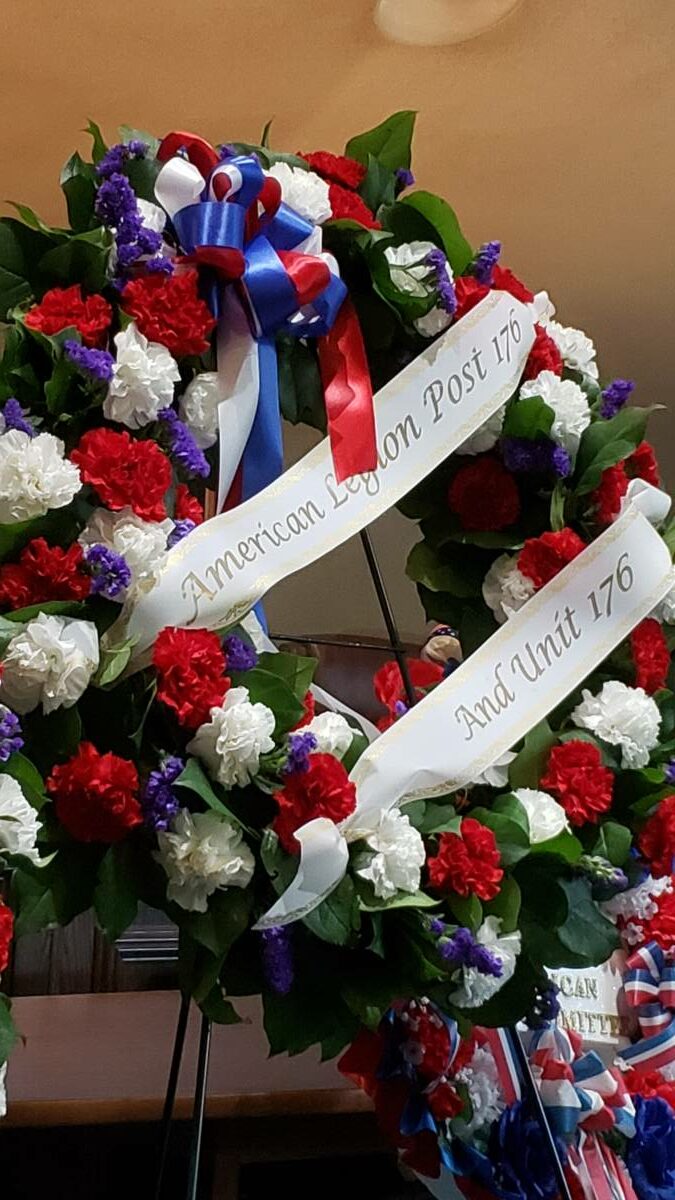 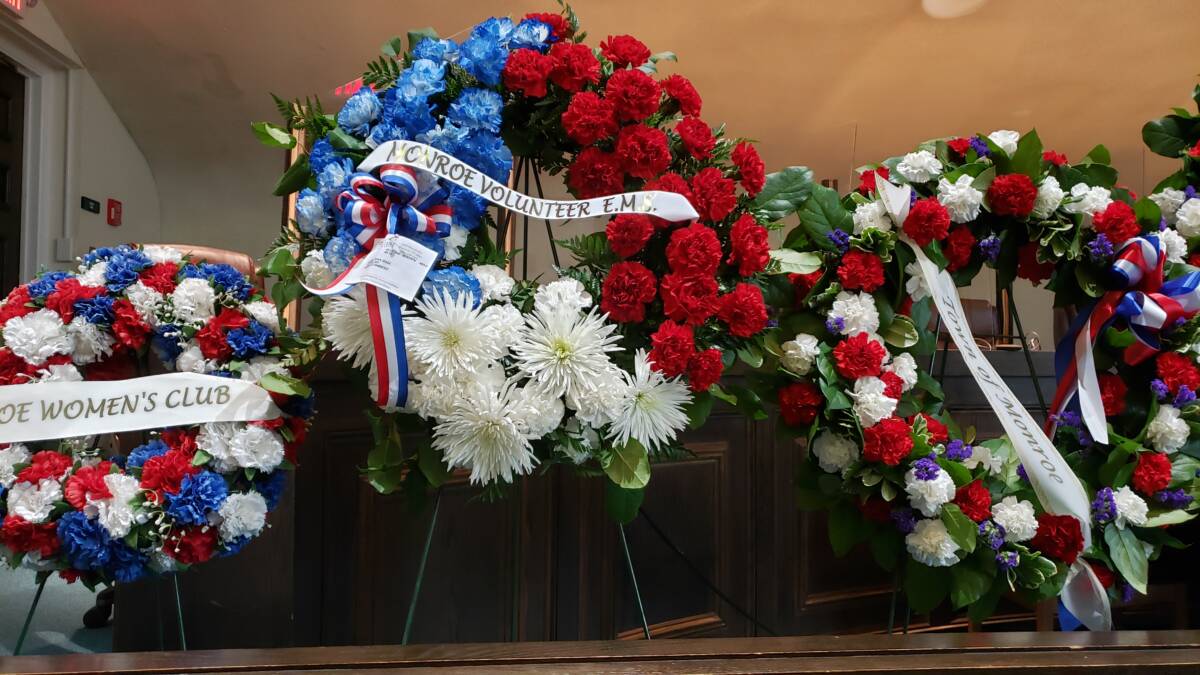