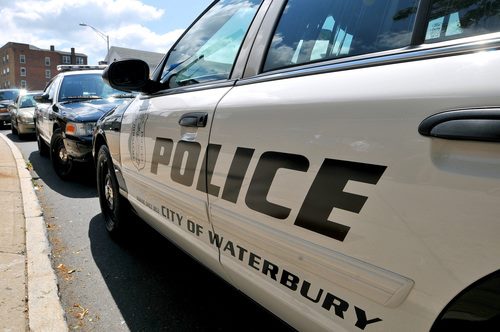 This photo is from the Waterbury Police Department Facebook page.

A Pine Tree Road resident reported the theft of a black 2018 Volvo S90 T5 on Sept. 22, and Waterbury police officers later recovered the vehicle and arrested two suspects after a foot chase.

That story was reported by The Monroe Sun last week, but Waterbury Police Lt. David Silverio shared the arrest information with The Sun this week.

Monroe police said the Volvo is owned by the resident’s employer, Elite Limousine, and it was parked in front of his home on a Saturday night. He learned it was stolen when a company dispatcher called him at 3:50 the next morning to ask why the car was in Waterbury.

Silverio said the victim tracked his stolen vehicle to Coe Street in Waterbury and called the police.

When the Waterbury officers arrived on the scene, the black Volvo was parked with the driver’s door open and they saw a male get out of the vehicle and yell, “run.”

The male, later identified as a juvenile, took off running north on Coe Street, refusing officers’ commands to stop.

When the juvenile had yelled, “run,” a second male, who was sitting in a white 2005 Acura TSX, exited the vehicle and also ran off.

Officers broadcast descriptions of the suspects, while chasing them on foot.

The juvenile was charged with first-degree larceny and interfering with a police officer.

The second male, later identified as Thomas Maysonett, 18, of New Haven, was apprehended in the backyard of an address on Walnut Street after running through several backyards and hopping over a couple fences, according to police.

Silverio said Maysonett cornered himself between two fenced in areas and gave up without further incident. The Acura was previously reported stolen out of Meriden.

Maysonett was arrested and charged with third-degree larceny and interfering. He was held on a $7,500 bond pending arraignment in court.

The owners of both stolen vehicles were called to the scene and took possession of their recovered vehicles, Silverio said.

Monroe police said the suspects may also be linked to reports of two unlocked vehicles entered on Pine Tree Road that weekend.