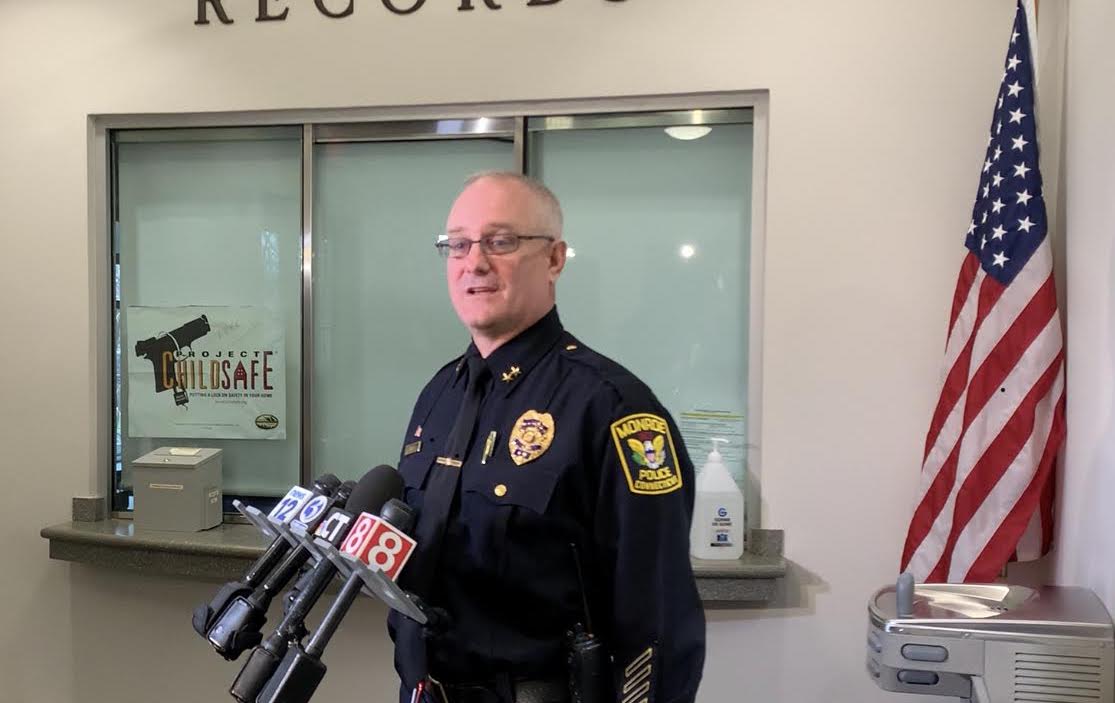 Monroe Police Chief Keith White addresses reporters at a press conference in the aftermath of Sunday's police pursuit and crash on Route 111.

MONROE, CT — A police pursuit that began in Waterbury Sunday morning ended on Route 111 in Monroe, where a suspect in a white Hummer crashed into a utility pole in the area of Wheeler Road, severing it. Seven Waterbury police cruisers sustained damage, six had heavy damage.

White said there were several reports from residents in the area of the crash and near the roundabout by St. Jude Church who heard a commotion and witnessed the pursuit.

“This was an isolated incident from a desperate individual,” he said. “We did put out various social media posts to try to let people know what was going on. We did have several officers in the area with road closures, who were able to speak to and address any of the neighbors who had any concerns. We just wanted to make sure they knew this was complete. It was over and there was no further danger to the public.”

As of 1:30 p.m. a section of Monroe Turnpike remained closed. White said the Monroe Police Department’s Accident Reconstruction Team was still using equipment to document the scene, adding it takes three-to-four hours to do a complete investigation.

“We’ll have the road opened as soon as possible,” White said.

When the Hummer drove through the utility pole, he said it took down wires. A crew from Eversource was on scene to make repairs as soon as the cars were removed, according to White.

The driver, identified as Hannah Casperson, 25, was taken into custody by Waterbury police officers at the scene and Monroe Volunteer Emergency Medical Services personnel took her to St. Vincent’s Medical Center in Bridgeport, where she is in stable condition, police said.

White said the State’s Attorneys offices in Bridgeport and Waterbury are investigating whether all chase protocols were followed by police, while the Waterbury and Wolcott police departments decide what charges to bring against Casperson.

White said Monroe is looking into its own charges against Casperson, including for the intentional striking of police cruisers.

At around 8:43 a.m. Waterbury police spotted Casperson’s vehicle, which was connected to a string of thefts in Wolcott and their city, according to White, who said a male suspect was previously arrested in connection with the thefts.

When officers attempted to contact her, the Hummer accelerated, colliding with a police cruiser, according to police. Then Casperson entered I-84 west, striking another police cruiser by the entrance ramp, police said.

The Hummer entered Monroe via Route 110 around 9:20 a.m., according to Monroe police who were notified at that time. Waterbury officers followed her into town, before she lost control of her vehicle just after leaving the traffic circle at the intersection of routes 110 and 111.

There have been reports of other police departments involved in the incident. However, as of this afternoon White said he was only aware of Waterbury and Monroe.

One thought on “Waterbury police pursuit crashes into Monroe, injuring the driver and 7 officers”