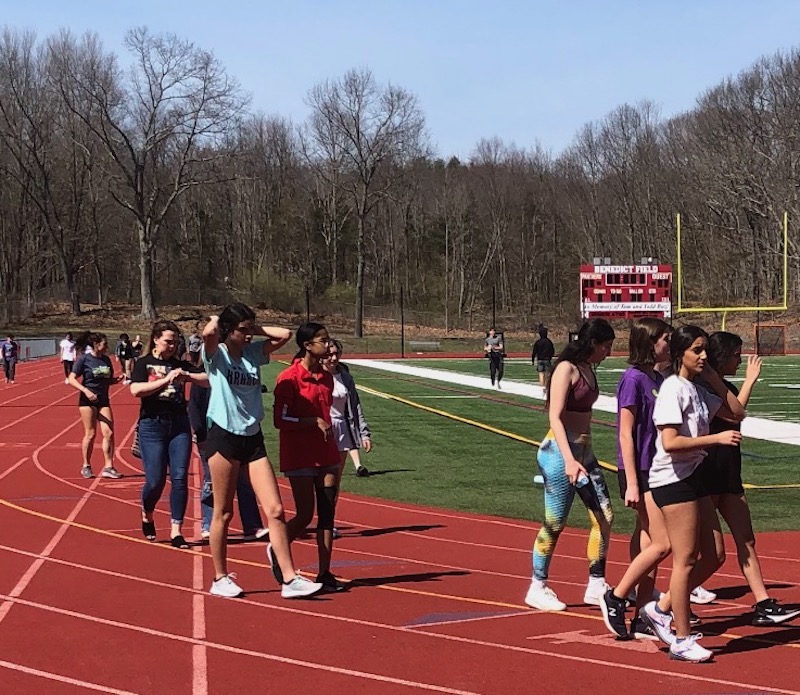 MONROE, CT — Walk a Mile in Her Shoes, The Center for Family Justice’s annual event to raise awareness of sexual and domestic violence against women and girls, will return to Fairfield’s downtown on April 23, but a group of Masuk High School students showed their solidarity in ending abuse 10 days earlier.

On Wednesday, students walked four laps around the high school track field after school for their own Walk a Mile in Her Shoes event, organized by the Interact Club, a youth service organization sponsored by the Monroe Rotary Club. It was the second year it was held.

Proceeds from the fundraiser will benefit CFJ’s Camp HOPE America in Bridgeport, a summer camp for children who experienced domestic or sexual violence.

“I was very happy to see the walk make it to its second year,” said Lauren Iverson, a Masuk Spanish teacher and moderator of the Interact Club. “I would like to see The Center for Family Justice do things on the High School level.”

“I love that it connects students, faculty and police in a positive manner that affects so many people,” Police Officer Brooke Larsen, Masuk’s school resource officer, said of the event.

Prior to walking the track, a brief explanation of the event was read aloud. It included sexual violence statistics and information about fundraising efforts. Among the statistics, students learned that one-in-five Connecticut residents will experience sexual violence in their lifetime.

A pledge vowing “to take action as an advocate for healthy relationships” was signed, then the walk began.

Iverson said it’s important to encourage healthy relationships among teenagers, because adolescence is when relationships are just beginning to start.

“I hope people will realize there is a place to turn to if anything is happening to them,” said Nicole Capozziello, a Masuk senior who is vice president of the Interact Club.

Capozziello said she joined the club because,  “I love giving back to the community, doing what I can to make a positive impact on other people’s lives.”

“I had a background in community service and wanted to connect students with that,” Iverson said of her own involvement.

The Center for Family Justice’s 10th annual Walk a Mile in Her Shoes will be held Saturday, April 23, staring at the Fairfield Train Station. For information, visit centerforfamilyjustice.org or call CFJ’s Development Team at 203-334-6154 ext. 121.