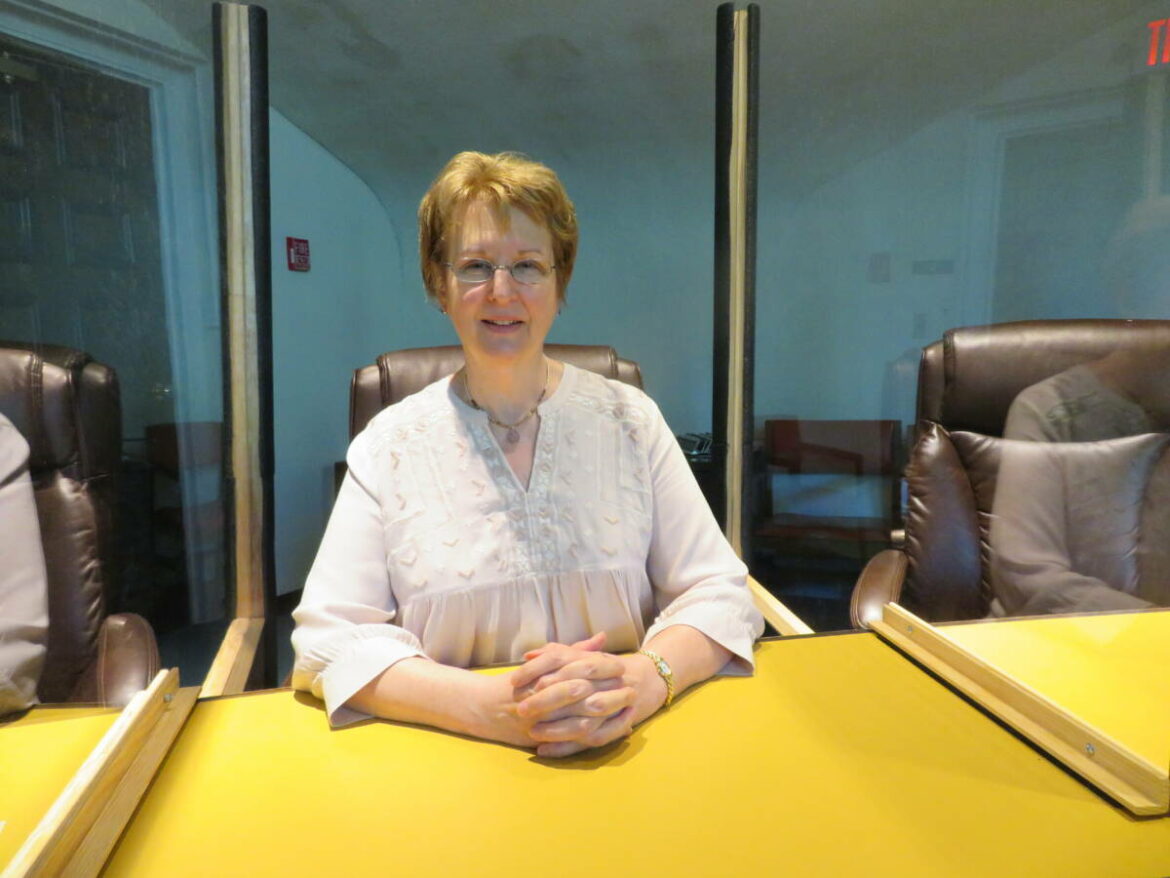 Dona-Lyn Wales takes her seat in the Town Council Chambers of Town Hall as a new councilwoman. Her name plate is being made.

MONROE, CT — Dona-Lyn Wales’ career in the pharmaceutical and biotechnology industry allows her to contribute to valuable treatments of diseases, by participating in the development and approval of drugs that improve patients’ quality of life.

“I worked on a study on rare diseases,” she said in an interview Wednesday. “It’s rewarding to see that work and people get a life back. You’re doing good work and it’s rewarding.”

Wales, a Monroe native, takes that same passion in her approach to community service. On Monday, the Town Council appointed her to fill State Rep. Tony Scott’s vacant council seat, for a term expiring on Nov. 22, 2021.

Wales, who is a Republican, previously served on the Conservation Commission, the Library Board of Trustees, and had recently been appointed to a vacant Board of Finance seat after Craig Hirsch accepted a job as the town’s human resources director. She currently serves on the town’s Bicentennial Committee.

“As a lifelong resident, I just wanted to give back to the community,” Wales said.

The Town Council had bonding resolutions on its agenda Monday night, for projects Wales was already familiar with through her work on the Board of Finance, so she felt comfortable to participate in the meeting as a council member right away.

“It was excellent timing and a good segue. It worked out very well for me,” Wales said.

“Dona-Lyn Wales, she was my number one draft pick,” said Councilman Terry Rooney, who heads the Monroe Republican Town Committee’s candidate recruitment efforts. “I reached out to her. Altruism is a tough thing, but she’s aces.”

Though Rooney said Wales was “amazing” on the Board of Finance, he said he believes Town Council is an even better fit for her.

“She’s very well rounded and she works hard,” he said. “You give her a task and she knocks it out of the park. I like workers over talkers. She’s all about results. That’s what we need in government: good hard work and making a difference — and that’s what Dona-Lyn does.” 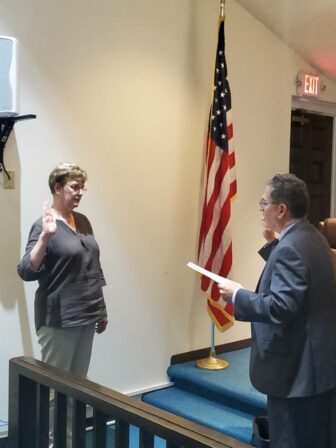 Dona-Lyn Wales, left, is sworn in as a new councilwoman by First Selectman Ken Kellogg at the Monroe Town Council meeting Monday night.

“She’s been very active in the community,” he said. “She’s been on the Library Board of Trustees, and more recently on the Board of Finance, and I think she’ll be a wonderful addition to the Town Council. In her career, she’s been in the pharmaceutical industry and has done a lot of budgetary and fiscal oversight. She’s done audits and strategy.”

Wales is also a member of the Monroe Republican Town Committee.

Donald Wales Sr. and Evelyn Wales bought property on Old Newtown Road in the late 1950s and had a ranch-style house built there in 1958. There they raised Dona-Lyn and her brother, Donald Jr.

Dona-Lyn’s parents were also active in the community.

Donald, who served in the Navy during World War II, was a member of Monroe’s Veterans of Foreign Wars Post 176, had been chairman of the town’s Memorial Day Parade Committee and was a member of the Zoning Board of Appeals and the building committee for the construction of Monroe Town Hall.

“When I was younger, my mother was involved in the Girl Scouts and 4-H,” Dona-Lyn Wales recalled.

Wales graduated from Masuk High School in 1976, where Town Council Chairwoman Enid Lipeles was her chemistry teacher for two years.

“I had Dona-Lyn Wales in class,” Lipeles said at Monday’s Council meeting. “She was always prepared and very smart.”

She now does jobs for companies through Redboch, an agency recruiting “highly skilled consultants to pharmaceutical, biotech, and medical device companies, according to its website.

“My role is to manage data from clinical trials and prepare that data for submission to federal regulatory agencies, both domestic — to the FDA — and internationally,” Wales said.

“I’m driven toward helping and supporting people,” she said. “I’m in a position where I can see a quality of life improvement. I want to be able to do that here, outside of my job.”

“Here” for Wales has always been Monroe. She never left, having bought her family’s ranch on Old Newtown Road, where she still resides.

“I love this town,” Wales said. “I find the education to be very good here. I love the small community nature of this town. There’s a nice rural charm that’s here — an historic charm.”