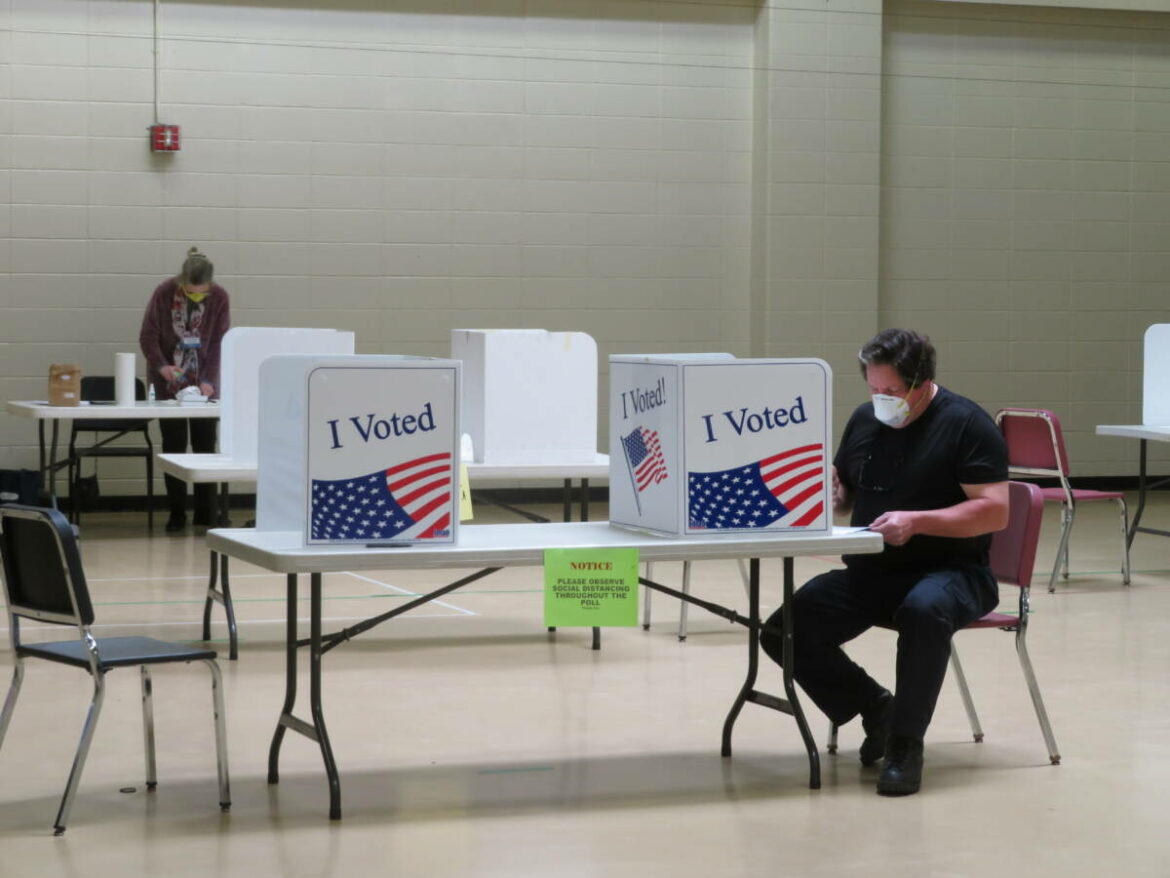 A voter fills out a ballot in the Masuk High School gym last year.

MONROE, CT — Monroe’s two candidates for the Connecticut General Assembly’s 112th District seat slugged it out over the past month, knocking on doors, blanketing Monroe and Newtown with red and blue signs, and sending out a barrage of campaign mailers, texts, emails and social media posts. As voters go to the polls for the special election today, Republican Tony Scott and Democrat Nick Kapoor are leaving nothing to chance.

Kapoor stood outside Stepney Elementary School with Lt. Gov. Susan Bysiewicz when a mother walked by, her toddler in tow. “Hi Nick,” she called out. “Thank you for supporting teachers.”

Later Tuesday morning, Scott and his campaign manager, Ryan Condon, greeted a couple outside Masuk High School. The man, who wore a Korean War veteran cap, walked up to Scott and bumped elbows with him. “There’s the man,” he said to his favorite candidate.

Meanwhile, William “Bill” Furrier of Sandy Hook, an Independent Party endorsed candidate, continued his low profile campaign, which is centered around his desire to completely reopen the state amid the COVID-19 pandemic. Other than going out to vote himself, Furrier is choosing to stay home today and “let the chips fall where they may.”

“I just find this whole thing interesting,” Furrier said in a telephone interview. “I’m thrilled there’s so much excitement for this race. I thought it would be obscure for a special election. I can’t wait to see how this works out. I think it’s going to be close. It can go either way.”

Of his reason for not visiting polling places in the district, which includes all of Monroe and a portion of Newtown, Furrier said he finds most voters already have their minds made up at this point in an election and just want to cast their ballots without being bothered, though some like to engage the candidates with friendly banter.

As of 11:30 a.m., a little more than 5.5 percent of Monroe’s 13,633 registered voters showed up at the polls, which close at 8 p.m., according to the Registrars of Voters Office. That is not counting the some 1,000 people who voted absentee.

Gary E. Zenobia, the town’s deputy Democratic registrar, said Monroe’s four polling places were busy in the morning before tapering off toward the afternoon. Greg Metz, the moderator for District 4 at Masuk, expressed his hope things will pick up again after lunchtime and work hours.

“It’s light, especially compared to a Presidential or a gubernatorial election,” Metz said of turnout for the special election for the General Assembly seat that opened up after Republican, J.P. Sredzinski resigned as state representative in February. 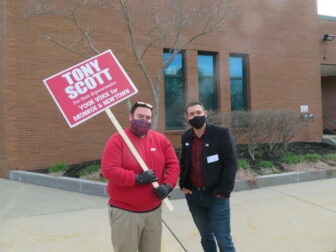 Tony Scott, right, the Republican candidate in the 112th District race, stands beside his campaign manager Ryan Condon at Masuk.

“I’m feeling really positive,” said Scott, who is a Monroe Town Council member. “Of course, it’s the fourth quarter — we’re near the end and I haven’t done this before. It’s a little nerve-racking, but the fact I’m getting a positive reception from voters is reassuring for me. I’m getting a lot of that. People are giving the thumbs up and thanking me for running.”

Scott, a married father of two, noted how candidates sacrifice time with family and their jobs to put more into their campaigns.

Scott had served as Sredzinski’s campaign treasurer before running himself. As a legislator, he said Sredzinski was non-confrontational and always told him, “you got to get the partisan part out of it and work together.” 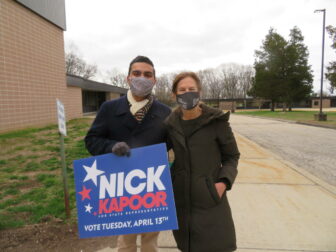 Bysiewicz touted Kapoor’s experience as a Board of Education member, a former Town Council member, a math professor and businessman, who also knows about state government having interned for a representative and serving on the Connecticut Commission on Human Rights and Opportunities.

“You couldn’t find a more qualified person to serve as state representative,” she said of Kapoor. “He brings a different perspective to our citizen legislature. We have so many backgrounds and I think Nick having a science and data background is so important when making public policy decisions.”

“I feel great,” Kapoor said, adding he believes he communicated his vision for the district and the state well to voters leading up to Election Day. “I’m hoping to earn their vote today. It’s been very positive at the polls.”

Bysiewicz and Kapoor agreed how important it is to knock on doors and talk to voters in person, while listening to their concerns directly. Kapoor said he has knocked on 8,000 doors and made 4,000 phone calls.

Scott has not kept track of the numbers, but said he and Condon have canvassed neighborhoods every weekend.

“You have to do all the work,” Scott said. “If you’re not doing the work, the residents in the district will know. I did the right things and we’ll see by the results tonight, that it will pay off.”

Condon glanced up at the cloudy sky, “I’m so happy the sun’s peaking out,” he said. 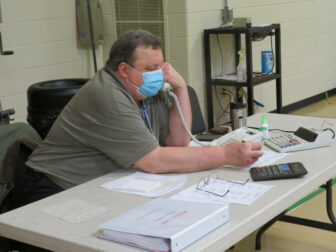 Inside the polling place at Masuk, Metz said the voting has gone smoothly, attributing it to the positive attitudes of voters and the hard work of volunteers.

There was one hiccup, when a voter told poll workers it was illegal to request an I.D. in Connecticut. Metz said he called the Secretary of the State’s Office to clarify the rules. He said there are many examples of a valid I.D., from a driver’s license to a credit card. It must be something preprinted with either a picture, an address or signature.

One alternative is a 681 form a voter signs under penalty of law, attesting they are who they say they are.

“I just wanted to make sure he was satisfied that he was treated fairly,” Metz said of the man who did not want to provide an I.D. “I want everyone to have a positive experience here today, so they come back — not today though.”

Metz, who has been a volunteer for elections for 28 years, 27 as a moderator, said he enjoys seeing young people participate in the process for the first time, including a teenager who voted with her father today.

“A young lady just registered yesterday,” Metz said. “That’s what I love best: passing it on to the next generation. This is important. Every vote counts.”