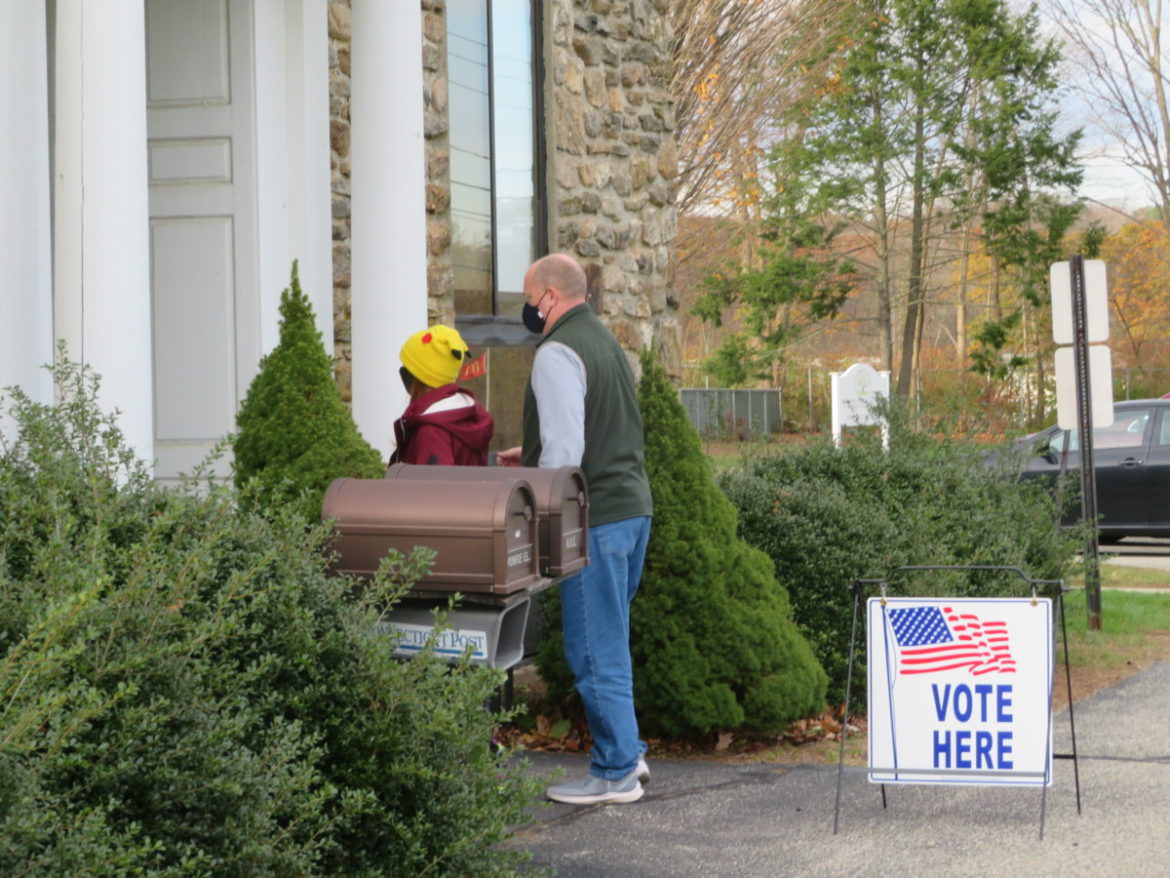 MONROE, CT — Frank Dutches arrived at Monroe Elementary School an hour early to serve as a moderator for the 2020 Presidential Election Tuesday morning, and it didn’t take long to see the day’s first voters.

“I was here at five and people were already waiting,” Dutches said. “It’s very good turnout, probably as good as 2016, if not better. We were probably 100 deep at 6 o’clock when we opened the doors. And we were steady through 8, when it started to narrow.” 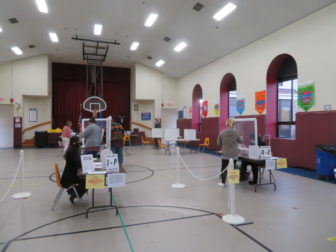 After a busy morning, the flow of voters at Monroe Elementary School had a slower period by late afternoon.

Poll workers there saw a steady flow of voters through lunch, and expected it to pick up again later in the day, according to Dutches.

Emotions are running high throughout the nation with President Donald Trump battling former vice president, Joe Biden, at the top of the ticket. Monroe residents have come out strongly for their candidates, whether it be in-person voting, by absentee ballot or registering and voting on the same day. 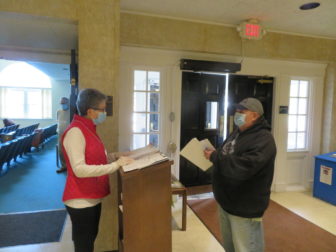 Alice Deak, left, an election official, helps a man to register and vote on the same day at Monroe Town Hall.

Elizabeth Edgerton, a volunteer registering voters in the Council Chambers of Monroe Town Hall, said 71 people registered and voted same-day as of 3 p.m. She added the final number will not be known until 8 p.m. when the polls officially close.

Sue Waters and Susan Koneff served as moderators, while volunteers opened and processed absentee ballots in the training room of the Monroe Police Department.

Eight women sat at tables, using letter openers to take ballots out of envelopes and check to determine if any needed to be rejected.

All rejected ballots must have the reason for the rejection written across the outer envelope.

Koneff collected stacks of opened ballots from the tables and Waters fed the ballots into the voting machine. “We don’t see the tally until 8,” Waters said.

Every 500 ballots or so, Koneff said they open the machine at the bottom to smooth out the bent ballots so it stacks neater, enabling the machine to handle more ballots. 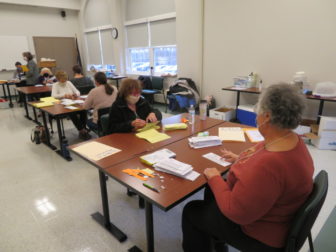 Volunteers open and check absentee ballots in the training room of the Monroe Police Department Tuesday.

Two large plastic bins filled with ballots were pushed against the wall and Koneff said they expected to fill two more bins.

Koneff, who was a longtime registrar, said most presidential elections result in 980 absentee ballots, while there is over 3,700 this year.

“We normally have four people counting and this year we have eight,” she said, “and we usually have one moderator, but now have two.”