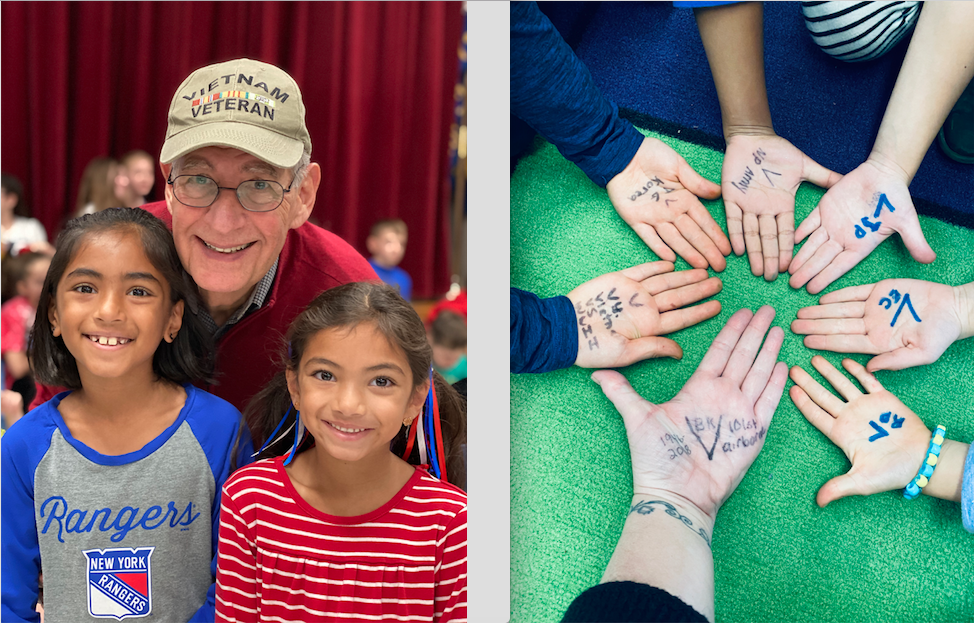 Neil Plain, a Vietnam veteran, left, with his two grandchildren, who are both Stepney students. At right, students honor loved ones, who served or are currently serving in the military, with USAA's #honorthroughaction campaign. Photos by Wendy Cushing

The cafeteria at Stepney Elementary School was awash in red, white and blue Monday, as students and faculty honored 12 military veterans, all of them relatives of Stepney students. Prior to the assembly in their honor, veterans sat down to a breakfast in the library.

“Having school in session on Veterans Day is a great thing, because it’s a learning opportunity for the children,” said Patti Suto, a teacher who organizes the annual event. “It’s wonderful to have them come face-to-face with the veterans. The children and grandchildren of the vets who visit are so proud of their loved ones.”

Once assembled in the cafeteria, the veterans sat with their children and grandchildren
on their laps in front of an audience of students from kindergarten through grade five, who held up signs, banners, and cards of gratitude and thanks.

During the hour long assembly, seven of the veterans stood and told the students about
their time in the armed services. Several Vietnam veterans like former Marine, Andy Tengeres, recounted their tours of duty.

“Some of the things I remember most in my time in the Marine Corps were that I missed three birthdays and three Christmases,” he said. “That was hard. And Vietnam was always wet. It rained for 30-40 days at a time,” he told the wide-eyed audience, “we were wet all the time.”

Tengeres reminded students that the reason he joined the service was to protect the freedoms of speech, assembly and religion the United States enjoys for others. “I went so that people would always be able to have the freedom to speak, get together with other people, and the freedom to be part of any religion they want,” he said. “Some countries don’t have that, but we do.”

Patrick Disney, a former member of an amphibious unit in the Army Reserves,
spoke to students about his family’s long military service, stretching back to the
Revolutionary and Civil Wars.

“I come from a military family,” he said. “I had relatives in the Revolutionary War. My brothers were in the military and my father was at Omaha Beach on D-Day.” 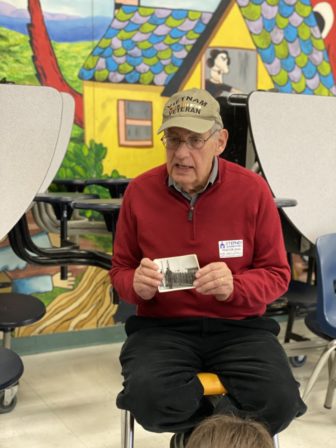 Neil Plain, who served as an Army infantry officer in Vietnam, shares photos and stories with his granddaughter’s third grade class. Photo by Wendy Cushing

Neil Plain, an Army infantry officer, served in Vietnam as an advisor to the South
Vietnamese. Plain shared photos and stories with his granddaughter’s third grade class. Students squealed as he recounted how soldiers and the South Vietnamese used to
throw their helmets to scare mice, then kill them, tie them to their belts, take them home and eat them.

“The kids always like that story,” Plain chuckled to their teacher. The army, he said, also afforded him the opportunity to see the world. “While I was in Vietnam, I was trained in the Vietnamese language and culture. I was fortunate enough to see the whole world during my career and to see different cultures and learn from them.”

Rick McCarthy, who served on a medical team in the Navy in the Persian Gulf War and
the War against terrorism in Afghanistan, summed up the holiday by reminding students of why they were there, saying, “when you see a veteran today, remember to thank them for their service.”