Headstones and fencing was damaged at the Stepney Cemetery, located at the corner of Pepper and Green streets.

MONROE, CT — Two old headstones were toppled at the historic Stepney Cemetery and one of the stones was shattered, according to police. A section of metal fencing was also taken down.

Police Capt. Keith White, who will be sworn in as the town’s new chief this Friday, said the damage was far into the back of the cemetery.

“We’ve been trying to be more visible in the area of all our commercial businesses and locations, which will now include Stepney Cemetery,” White said Thursday.

Stepney Cemetery is the final resting place for many notable Monroe residents, including veterans of the Revolutionary and Civil wars. Volunteers from the Stepney Burial Ground Association work hard to maintain the grounds, a stone’s throw from the historic Stepney Green at the corner of Main and Pepper streets.

White said Our Lady of the Rosary Chapel is responsible for the maintenance of the cemetery. 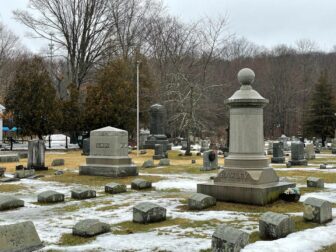 Stepney Cemetery is located at the corner of Pepper and Green streets. Photo by Greg Loehr

On Wednesday morning, someone walking their dog discovered the damage and called Kate Chase, the sexton in charge of the cemetery. Then Chase filed a complaint with the Monroe Police Department.

Each of the two headstones weigh about 200 pounds, White said adding, the one that remains intact dates back to May of 1883.

White encourages residents to help police protect the cemetery when they see something suspicious. “If people see something out of the norm or suspicious, please contact us at that time,” he said.

This is the second time the Stepney Cemetery was vandalized this month. On Feb. 4, police investigated a complaint over spray-painted graffiti on a shed in the back of the property, an old building that recently had a new roof put on, as well as a fresh paint job.

The graffiti on the white clapboard shed had the word “Joker” twice in dark red paint, along with what appeared to be drawings of male genitalia.