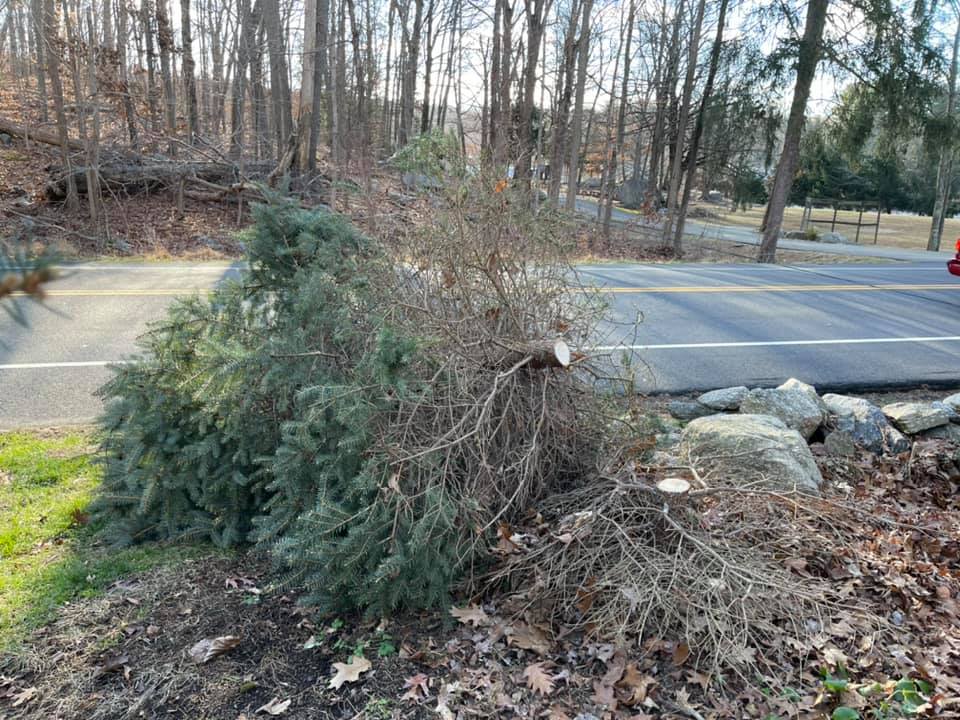 Someone cut down a decorated blue spruce in front of Kevin and Korene Dahls' home on Easton Road and left it on the ground.

MONROE, CT — A row of blue spruce trees are decorated in front of Kevin and Korene Dahls’ house on Easton Road as part of their holiday display of Christmas lights. But the joy of the annual spectacle was marred Wednesday night, when someone cut down one of the trees and left it on the ground.

“They cut it down and let the tree fall with the lights still plugged into it and they left it laying there,” Korene Dahl said Friday. “We felt the sadness of, ‘why would anybody do that?’ It’s hard to understand. It added to 2020, I guess.”

The Dahls filed a police report on Thursday morning, so officers would be aware of the incident and Korene said she heard someone stole a Christmas tree from Greiser’s Coffee & Market in Easton the same night.

“A Grinch stole our Christmas tree!” the store posted on its Facebook page. “We had just strung the lights on the perfect little tree that Adele O’Kane so generously cut from her farm and placed for us at the corner of Westport and Center Roads. It disappeared sometime late Wednesday night or early Thursday morning. Lights, tree stand and all! That Grinch must be unaware that Santa keeps a close eye on the Christmas Tree Capital of Connecticut!”

Dahl said she called the store and left a message, asking if they have surveillance video of the theft that could be shared with the Monroe Police Department. She had not heard back as of late Friday afternoon. 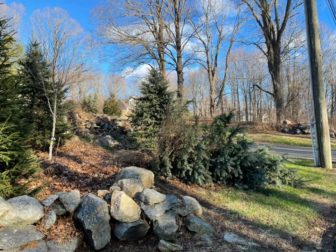 A blue spruce lay on the ground in front of Kevin and Korene Dahls’ home on Easton Road after a vandal cut it down sometimes between Wednesday night and early Thursday morning.

The Dahls are good friends with their neighbors, Jason and Moe Hall, who surprised the couple by decorating their trees for them two years ago.

“Last year, we decided to do it,” Dahl said of the new tradition. “They lit them up for us and we took over. We both benefit from having those lights.”

Dahl and her husband relax by their fire pit in adirondack chairs some evenings to enjoy their Christmas lights. Their two children, ages 15 and 19, love seeing the display as they drive to the house and encouraged them to add to it this year, according to Dahl.

“They love the holiday cheer and spirit,” she said. “It’s fun to put it up and just have people enjoy it. We love getting text messages like, ‘I love the reindeer on the roof.'” 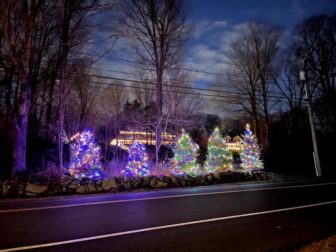 Kevin and Korene Dahl entered their Christmas light display into the Light up Monroe contest to raise money for the Monroe Playground Foundation’s project to replace the Kids Kreation playground at Wolfe Park.

The Dahls entered their light display in the Light up Monroe contest, a fundraiser by the Monroe Playground Foundation, which is spearheading a project to replace the Kids Kreation playground at Wolfe Park with a modern playground with a community build.

“I think it’s such a beautiful idea,” Dahl said of the contest. “Wolfe Park was the selling point for us when we moved to Monroe 12 years ago.”

They are among 46 participants in Light up Monroe.

“It brings awareness and brings Monroe together as a community,” Dahl said. “With how many people are involved and all the houses lit up, it’s wonderful to be a part of something bigger like that, and to be part of the community.” 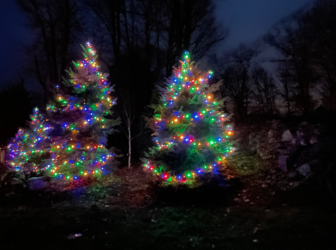 The blue spruce that was cut down is on the left in this photo.

The felled blue spruce is proudly on display beside the other six trees in the row in front of the Dahls’ home.

“We picked up the Christmas tree and put it in the same spot. It will be there throughout the holidays,” Dahl said, adding the tree was put into a stand. “I want to celebrate and bring holiday cheer. It’s been a difficult year and if someone can drive by the house and it makes them smile, it feels good to bring some joy to people and share some holiday spirit.”

Some people have asked Dahl why she thinks someone cut down her tree, while trying to make sense of the crime.

“I would hate to think someone was just doing it to be hateful and mean-spirited,” she said. “I probably would have felt better if they took it as need, than dropping it and leaving it there. I would certainly rather buy them one, instead of having a tree cut down in my front yard.”