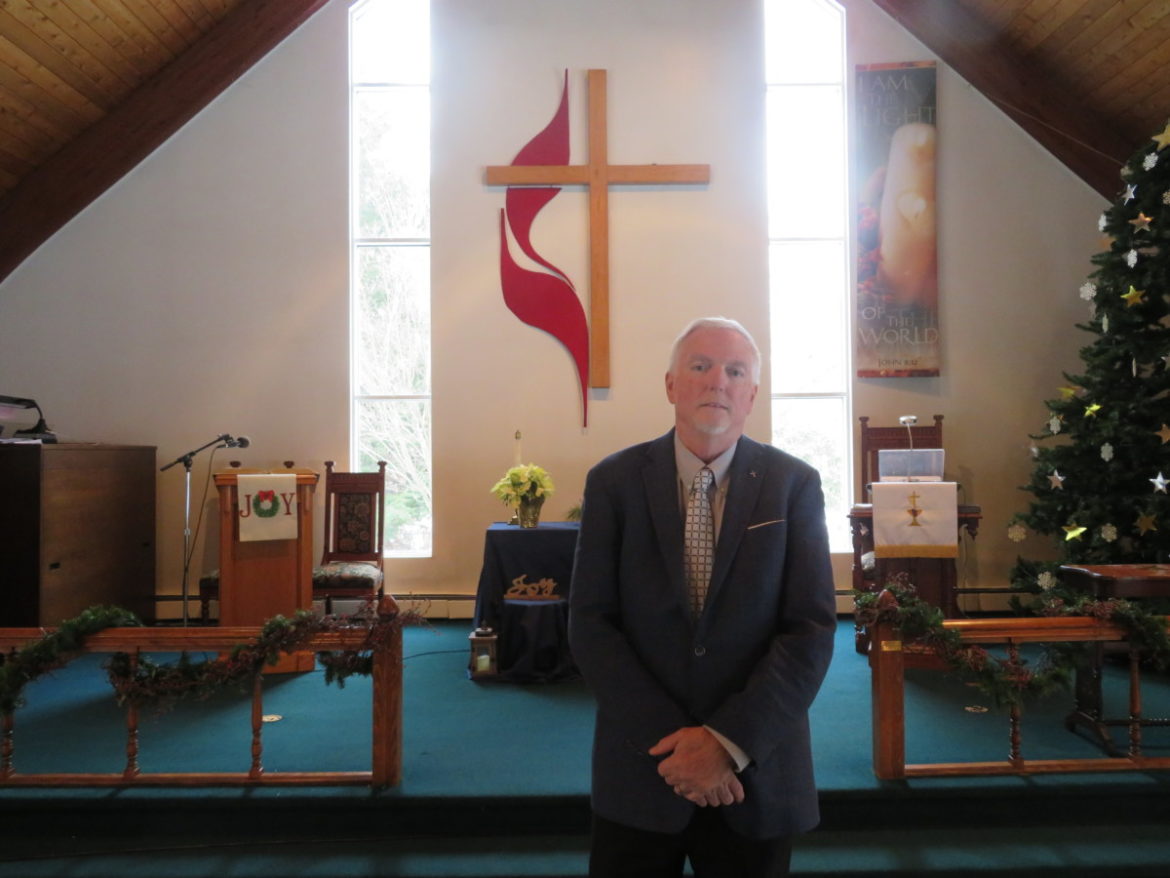 The Rev. Ed Dayton stands in the sanctuary of United Methodist Church of Monroe Friday afternoon.

Mothers walked hand-in-hand with their toddlers in the Long Hill United Methodist Church parking lot on Main Street in Trumbull for pre-k classes Friday morning. Inside, The Rev. Ed Dayton quietly worked in his office. Dayton, who recently added the role of pastor of United Methodist Church of Monroe to his responsibilities, has plenty on his plate.

“I plan on doing some mission work together,” Dayton said of the Monroe and Trumbull churches. “It’s so early. I’m still feeling out the people and where they want to take this.”

UMC Monroe is located at 515 Cutlers Farm Road, while Long Hill UMC is at 6358 Main St. in Trumbull.

Dayton, 65, with white hair and a goatee, wore a dark blue sport jacket, a gray dress shirt and tie, during an interview in Trumbull. He has only been Monroe’s pastor since Dec. 1.

“So far, I have met warm, loving people, who love their church and love Christ, and I’m excited to be there,” Dayton said, while seated on a couch at Long Hill UMC. “Last Sunday was the first service. I was very warmly received and I’ve had meetings with their leadership on four different occasions.”

Among those who have met Monroe’s new pastor were Dotti Hossler and Rose Aiello.

“I am excited about the appointment of our new pastor,” said Hossler. “He is passionate about his ministry and that is evident as he has ‘hit the ground running’ with his new assignment. He and I have a connection through mutual friends from his previous charge, so I think he is going to be loved by the congregation.”

“We are looking forward to working with Pastor Ed and his wife, Patty, as we move forward into 2020,” Aiello said. “Although he will be with us on a ‘part time’ basis, we already feel connected to his other parish and the plans we can share with one another.  Pastor Ed has hit the ground running and we are energized to continue to do the many good things we have supported over the years, as well as embracing the changes.”

Dayton and his wife, Patty, live in Danbury and have three adult children and 12 grandchildren.

Bishop Thomas Bickerton asked Dayton if he could serve UMC Monroe too, because of the previous pastor, The Rev. Mark Allen’s leave of absence. Allen who served there for a year, recently relocated to Michigan. 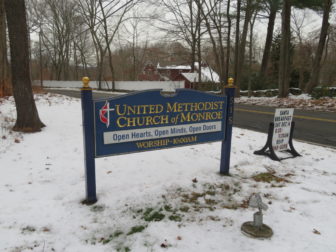 Dayton was already serving as pastor of two churches when the bishop called him. In addition to Long Hill UMC, he served at Long Ridge UMC in Danbury.

Prior to that, Dayton served at two churches simultaneously in New York state, while at Carmel and Purdys, a suburb of North Salem.

“What made it work when I was in Danbury, is I lived three-quarters-of-a-mile from that church,” Dayton said of being pastor of two churches.

“With traffic, it’s a nine minute drive,” Dayton said of the distance between the two churches.

The closeness of the Monroe and Trumbull churches goes beyond the physical distance, according to Dayton, who said some members of Long Hill UMC have relatives who go to UMC Monroe.

“You use the same platform,” Dayton said of preparing the services, “and as you know the people more, you make minor tweaks to make it more relevant to that congregation.”

Dayton grew up in a Methodist family and met his wife when both were students at Danbury High School. He went on to have a career in the engineering and management division of Emerson.

The Daytons went to a UCC church for 10 years, but it was not until 2009 that he experienced his calling to ministry.

“In my case, there really wasn’t one particular thing,” Dayton recalled. “It was a combination of things that kept nagging at me and finally I gave in.”

For others, a call to ministry can be more dramatic.

“I have a friend who woke up in his college dorm and saw a burning bush and, in his vision, Moses came out and said, ‘we need you in mission,'” Dayton said.

Dayton went through a two year process of becoming a minister, before the bishop assigned him to be pastor of Highland Falls Methodist Church in New York, where he served for two years.

Dayton said every assignment is for one year, though it can be renewed by the bishop.

He started out as a second career pastor, the term for a pastor who still works in the private sector. Dayton said he knows people who came to the ministry from all walks of life, including someone who was a surgeon at Johns Hopkins.

“There are so many things I like,” Dayton said. “I like dealing with the youth and the children a lot. I like the mission part a lot. I like preparing church services a lot.”

Dayton is co-chair of the Board of Mission, which plans church missions, which can be local, in other states or anywhere in the world.

Among the countries Dayton has gone to are Bolivia, Japan and the Philippines. “I’m off to Africa next fall,” he said of a trip to Tanzania. “We support some orphanages there,” he said. “As part of the leadership team, I’ll see what they’re doing and what they need.”

Dayton said he is inspired by the high spirits of those he encounters on these missions. He said, “to see in other parts of the world, especially in the Philippines, the abject poverty and the incredible joy they have is mind boggling.”