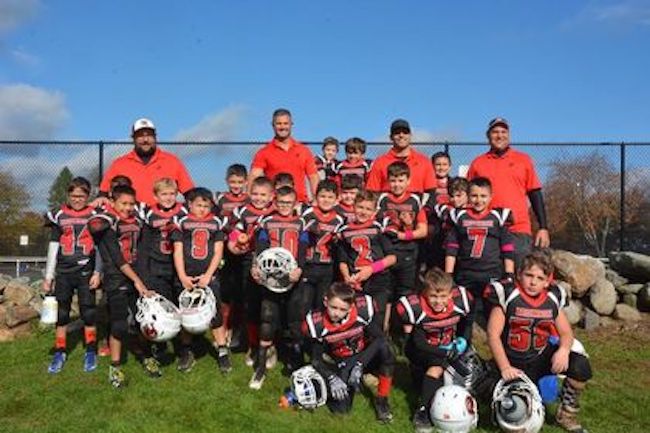 MONROE, CT — The Monroe Lions’ third-grade football team faced a 2-0 deficit in the American Youth Football Shoreline Division Championship game at Wolfe Park Sunday. And all appeared to be lost when a late game drive by their offense stalled at Wallingford’s one yard line, as a Monroe runner fumbled on his way to the winning score.

Lions Head Coach Matthew Palmieri said the turnover was “just one of those things.” It could have been the final blow, but the coach said the Lions have been a gritty hard-nosed team all season. 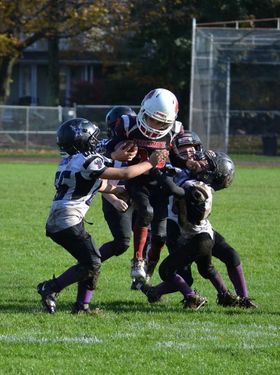 A Lions’ ball carrier gets bottled up in defensive battle against Wallingford Sunday.

“As we prepared the defense to go out again, we could see from their eyes they were upset,” Palmieri said of his players. “They got out there. They held back their emotions and they made a play.”

Refusing to give up, the Lions’ dominating defense came up with a game tying safety. Neither offense scored in the ensuing overtime session, so both undefeated teams shared the championship with a 2-2 tie.

Palmieri said his young players have just completed their first season of tackle football, but learned the game quickly.

“It was really an amazing year for them,” Palmieri said. “These guys had only played flag football. We improved dramatically over the course of an eight week season.”

The Lions enjoyed some blowout victories over the course of an undefeated season, but also scrapped to win tight contests.

“Our defense really kept us in the games,” Palmieri said. “It’s a tough, gritty, blue collar defense. They all support each other and make plays when it matters most.”

The nail biters included a 6-0 shutout against Pomperaug and a game in which the Lions trailed Southington 6-0, before scoring the tying touchdown and converting the extra point for a 7-6 triumph.

“The other kids in our league were very competitive,” Palmieri said.

During the season, Monroe swept two games a piece against Shelton, Newtown and Pomperaug. 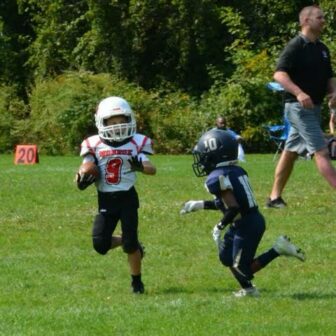 A Lions runner tries to make a tackler miss.

Palmieri said his players are already good kids, adding Lions coaches teach them to be pillars of their community with respect for the American flag, their teachers and their parents, putting the team first by clapping for and supporting each other, and to treat other children well.

“I’ve seen them grow, not only in football, but in other aspects of their life,” Palmieri said.

On Saturday, the team participated in the Chasing Ciara’s Light 5k/12k Trail Run at Great Hollow Lake. The event is held in honor of Ciara O’Driscoll, a 12-year-old Jockey Hollow Middle School student, who touched many lives, while raising awareness of Dravet syndrome, before succumbing to the disease.

Dravet syndrome is a rare, drug-resistant epilepsy that begins in infancy or early childhood, causing seizures while inhibiting development.

Aside from being good kids and good students, Palmieri said his players are great athletes. He also gave credit to his coaching staff, who worked with the boys for three months to prepare them for the physicality of tackle football. 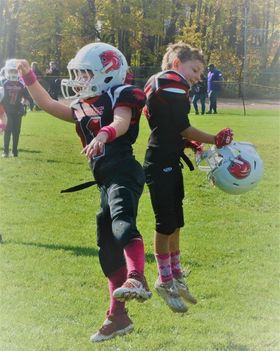 On Sunday, hundreds of fans came to Wolfe Park to cheer for the Lions against Wallingford, Palmieri said in appreciation, adding Wallingford was the toughest team Monroe faced all season.

“Monroe is a tight knit community,” he said. “It’s one of the things that brings people together. It’s not just the game, it’s supporting each other.”

In overtime, each team was given two possessions from the other’s 10 yard line, but both defenses held firm.

“In a weird way, I think it was great that neither team lost,” Palmieri said. “None of these kids deserved to lose a game.”

The Lions will share the championship trophy with Wallingford during the offseason, Palmieri said, adding he will bring it to his team’s banquet.

The Monroe Lions have a team first mentality.

The coach said his young players should learn something from coming back from behind to earn the hard-fought 2-2 tie.

“It’s a good lesson for the kids,” he said. “Now our backs are against the wall. How do we respond?”