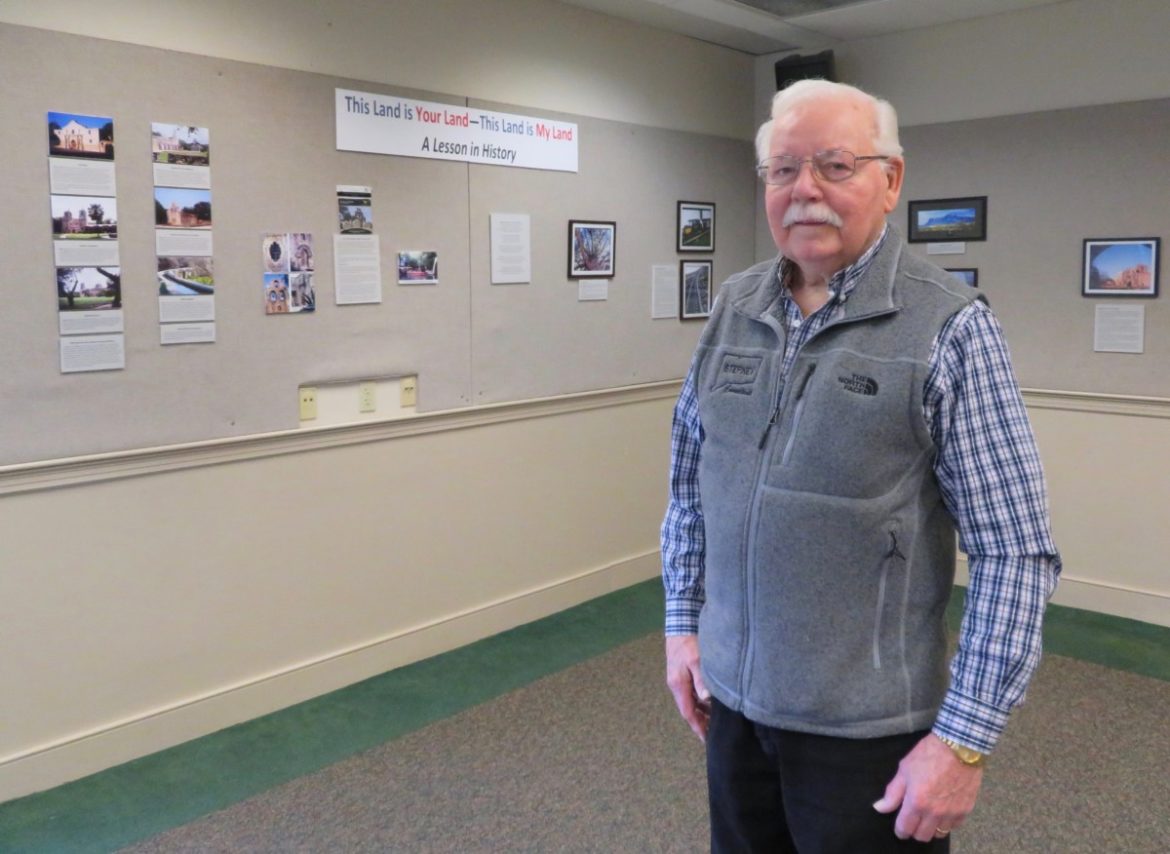 Lee Hossler, of Monroe, stands by his photo exhibit in the Ehlers Room of Edith Wheeler Memorial Library.

A photo exhibit inside the Ehlers Room of Edith Wheeler Memorial Library takes visitors on a cross country journey, capturing landmarks like the Statue of Liberty and Niagara Falls in New York, the giant redwoods of California and old stone missions in Texas.

The exhibit, “This Land is Your Land, This Land is My land: A Lesson in History,” was created by Lee Hossler, of Monroe, who was employed as an industrial photographer, as well as a photographer for the Fairfield County Tourist Bureau.

“As I traveled the country, I took pictures and realized the pictures I was taking have a history,” he said of the exhibit.

Woody Guthrie’s song, “This Land is Your Land,” played in the background during an opening reception for the photo gallery on Saturday, Feb. 8, and the lyrics to the famous song are included in the display, which may be viewed when the room is open during library hours from now until March 2.

Hossler, 80, the former chairman of the Monroe Economic Development Commission, currently serves on the Monroe Chamber of Commerce’s board of directors and on the Save Our Stepney Task Force in town.

He and Dottie, his wife of 55 years, have a son, Michael, who lives in Newtown with his wife Kim. They gave the Hosslers’ two grandchildren, Madeline, 18, and Jake, 16.

Some of the photos in Hossler’s exhibit are from business trips over the years and others are from family vacations.

Among the framed photos is a cityscape of lower Manhattan with the Twin Towers and another of how it appears today.

On Wednesday morning, Hossler looked at one photo showing a July parade in Wardsboro, Vt. — population 825. “It’s Americana,” he said with a smile. “These old-timers with their musical instruments get together. They’re wearing straw hats.”

Pictures of Niagara Falls include one without water.

“This is when they shut the water off at Niagara Falls in 1969,” Hossler explained. “We used to travel a lot. We have good friends in Canada and we happened upon it. They were concerned about rocks falling off on the American side. They used seismographs and cables to help stabilize the erosion.”

Other photos include Pennsylvania farms and Coconino National Forest in Arizona. Hossler said the forest has ponderosa pine trees that grow up to 200 feet tall and live up to 400 years.

“You can identify the trees by smelling the bark,” he said. “It smells like vanilla or butterscotch.” 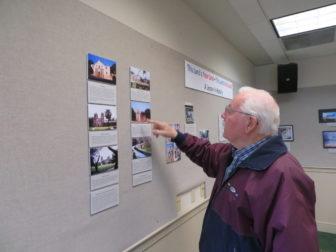 Lee Hossler shows the architectural features of the old stone missions in Texas, while touring his photo exhibit, “This Land is Your Land, This Land is My Land: A Lesson in History.”

A label near the photos reads: “It’s amazing craftsmanship created in the 1700s.” Of the designs of the stone buildings, Hossler said, “the reason everyone has a bell tower is nobody had watches.”

He said bells were rung in the morning to wake villagers up for services, in the noon time for them to come back from the fields and eat lunch, and at the end of the day, telling them it was time to leave the fields for dinner and services. 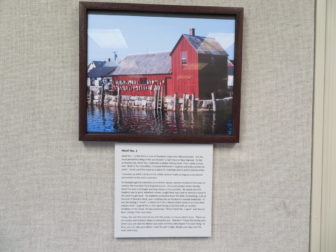 Hossler took this photo of a motif in Rockport, Cape Ann, Mass.

A wooden building’s reflection can be seen on the water in a photo Hossler took at a cove in Rockport at Cape Ann, Mass.

“This beautiful historic building was built in the 1930s,” he said. “It was a fish house. It’s one of the most photographed buildings in the country. People come from all over to photograph this motif.”

A silhouette of a cactus Hossler took in the Arizona desert has a sunburst shining through it.

“The sun was coming up. It was very serene,” he said. “I used to hike in the desert and had encountered rattlesnakes.”

While hiking in a desert, Hossler said to tap the ground in front of you with a stick, so the vibration will make any snakes slither away.

Despite precautions, one day Hossler said he came upon a rattlesnake about five yards away from him, coiled and ready to strike. He backed away slowly, avoiding any sudden movements until the snake left toward some rocks.

Another time, Hossler said a rattlesnake stretched across his path, while on its way somewhere. The dangerous reptile didn’t notice him.

Hossler’s photo exhibit includes Mount St. Helens, the Marina Towers in Chicago and a picture showing the Golden Gate Bridge in San Francisco engulfed in a fog coming off the Pacific Ocean.

One of Hossler’s most memorable photos was taken from atop the iconic Gateway Arch in St. Louis.

“I took an elevator to the top where there are observation windows,” he recalled. “It’s a weird feeling. You feel like you’re skydiving.”

At the top, Hossler took a picture showing the giant shadow of the Gateway Arch over the landscape below, which included the Robert E. Lee river boat Stern Wheeler docked on the Mississippi River.

Hossler’s experience with photography dates back to when he was a teenager. He said, “I went from black and white to color film, to slides and digital.”