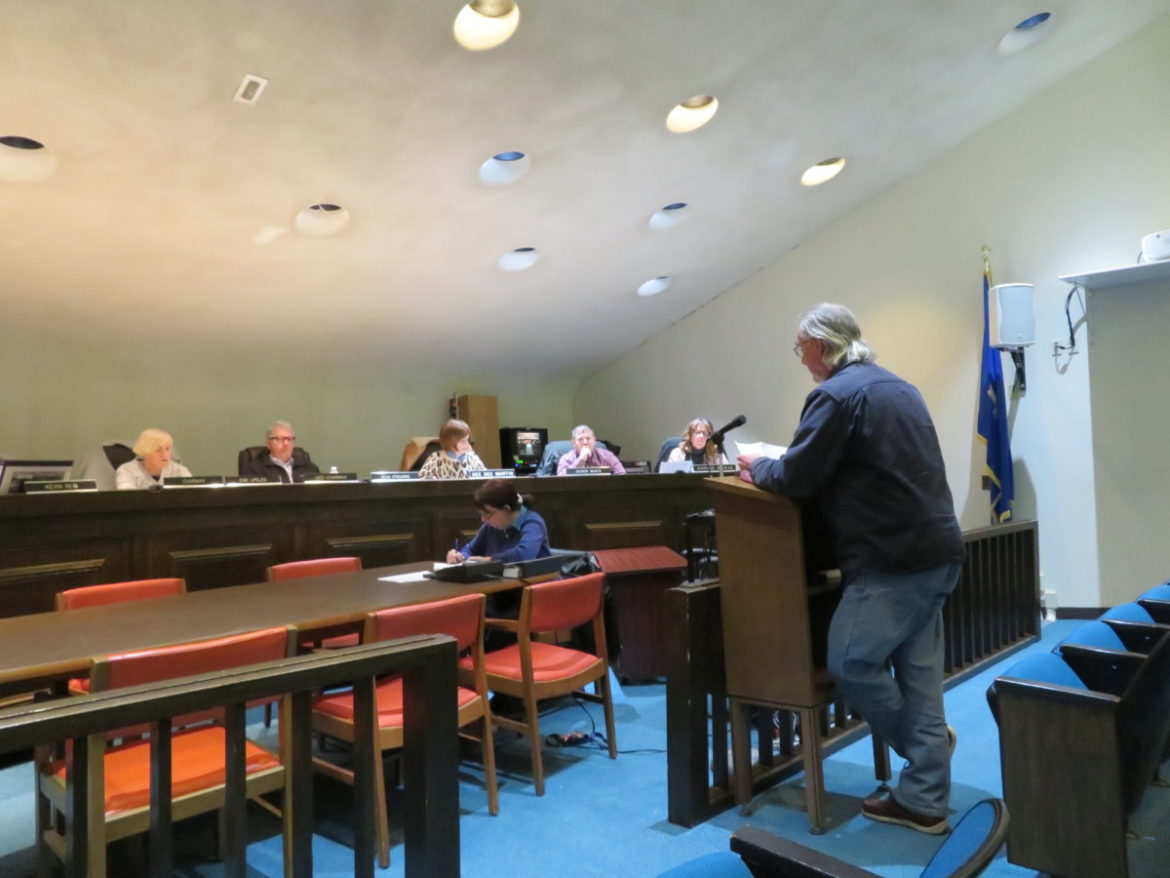 MONROE, Conn. — Seven residents spoke during a hearing on First Selectman Ken Kellogg’s $91.5 million budget proposal Thursday night, and all but one expressed concerns over the proposed spending increase on the Board of Education side and its impact on a 2.6 percent tax hike.

“Under the town budget being proposed, Monroe will have the highest mill rate in Fairfield County, save Bridgeport,” said Bob Guere, of Robin Lane.

If the first selectman’s budget is adopted without changes, the mill rate, which residents use to calculate individual tax bills, would rise from 35.58 to a projected tax rate of 36.51 mills for a 2.62 percent increase.

Guere said the Monroe Board of Education website shows a 27 percent drop in student enrollment over the last 12 years, from over 4,400 to under 3,200.

“But the budget never goes down, no matter how much enrollment declines,” he said. “I want more oversight of the Board of Education budget.”

Mark Antinozzi of Fan Hill Road, who had served on several town boards, including the Board of Education, blames the teachers’ union for higher taxes and a deficit in the current board budget.

He was critical of the raises in the new teachers’ contract and expressed his opinion that teachers should contribute more than 18.75 percent to their health insurance plans.

“We’re going to have the same problem next year and the year after that, because of the cost of programs,” Antinozzi said. “We have our head in the sand.”

He said the Board of Education should eliminate nonessential programs and staff.

“If the union contract cannot be reopened, prepare for a battle with the next contract,” Antinozzi said. “We have to battle tooth and nail, because we will be bankrupt.”

He added town officials should not be afraid to go to arbitration.

Hardy said Monroe’s kids do well in school, not because the town spends money, but because “we care about their education.”

“We can do better with less,” he said.

Nina Gagnon of Pepper Street, who has two children enrolled in town schools, said there is overcrowding at Stepney Elementary School, where her son’s classroom has 24 to 25 students.

Gagnon said she contacted Board of Finance Chairman Michael Manjos to express her concern and he told her she should speak with the superintendent. But Gagnon said, “if he doesn’t have the money, he can’t hire the teachers.”

“Overcrowding in schools is detrimental to our kids’ education,” she said.

As a former teacher, from her experience, Gagnon said smaller class sizes allow a teacher to get to know her students and their strengths and weaknesses better, so they can give them the help they need.

She also said smaller class sizes make it easier for teachers to crack down on bullying.

“These children, if you cut from them, you are cutting out your future,” Gagnon said.

Not one dollar more

Marion Frost, of Old Zoar Road, said she and her husband did not chose to move to Monroe for its school system 20 years ago, because they have no children. They were attracted to the community and recently voted yes for a slew of capital projects to improve infrastructure like town roads.

Frost said she called the first selectman to express concern over the budget and thanked him for reducing the spending increase.

“We who oppose this increase are not questioning your judgement,” Frost told town officials. “We’re just saying it’s exceeding our ability to pay.”

If the budget is voted down at referendum, Frost said it will mean the majority of voters thought it was too high and more money needs to be cut.

Lee Hossler, of Stanley Road, asked the Town Council and Board of Finance to think about Monroe’s senior population as they revise the budget, which Hossler said is “very large for a small town.”

Ray Giovanni, a banker who heads the Monroe Chamber of Commerce and Monroe Economic Development Commission and has a child in the school system, said he was a teacher when educators were underpaid and had to fight for binding arbitration.

“Now the pendulum swung too far the other way, as it always does,” he said.

Giovanni said the school system does a phenomenal job, but he added, “everyone talks about the issue of taxes in our town.”

Giovanni said he sees town employees go without the raises they deserve and need to feed their families and stay in Monroe, so more money can go to the education side. “They will never get their increases,” he said. “They’re on the short side of the fence.”

He said landlords raise their rents to make up for tax increases, putting a squeeze on business owners who lease space in Monroe’s commercial centers.

“Maybe there’s another way to look at the same thing twice for a different solution, so we can keep the town we’re proud of,” Giovanni said.

The town budget also includes Fund Appropriations and Contingency, which would rise from $1,648,636 to $2,861,000 for a 73.5 percent increase. The bulk of the increase is a $1.5 million medical reserve fund for the Board of Education.

“Due to the state-mandated property revaluation that was just completed by our Assessor’s Office, the mill rate increase is not in proportion to the tax levy,” Kellogg said. “Since the property revaluation affects each taxpayer differently, I encourage taxpayers to go to our online calculator to research the potential impact to your tax bill.”

To view the online calculator click on this link.