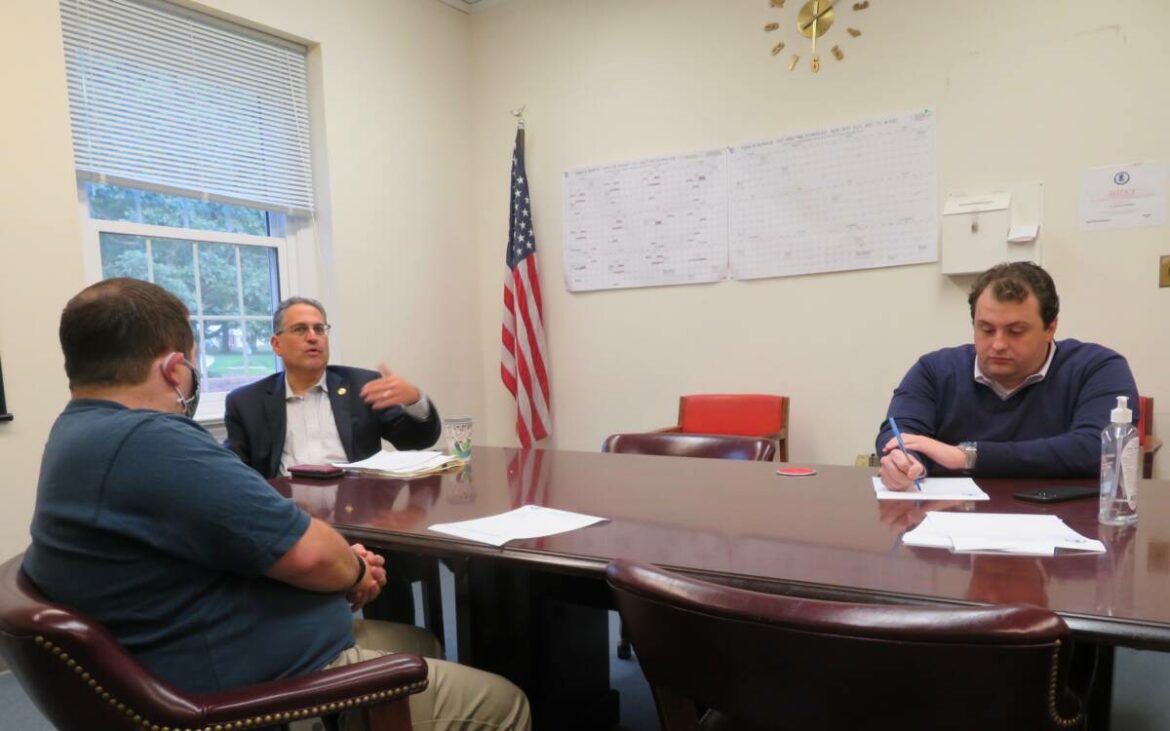 MONROE, CT — Blight can pose health risks, as well as being unsightly, from dilapidated buildings and piles of garbage to overgrown grass and weeds attracting rodents. The situation can be frustrating for neighbors, as well as property owners who feel unfairly targeted.

“We try to work with property owners,” First Selectman Ken Kellogg said. “The goal is to resolve the issue and not to be punitive. We try not to be heavy handed, but patient. It takes a long time.”

For example, the first selectman said town officials have been working closely with the owner of a dilapidated house on Route 111, near Monroe Elementary School.

First, Zoning Enforcement Officer Joseph Chapman identified the owner, who agreed to clear away brush from the property, then to demolish the house, according to Kellogg.

But it still takes time for the owner to find a contractor and to remove an oil tank, before there is a 30-day-waiting period to demolish the structure, in the event historians want to save or document the building first.

In another example of property owners working cooperatively with the town, Kellogg said the owner of the old Stevenson Post Office building agreed to redo the roof and one side.

Years ago, the Town Council’s Legislative and Administrative Committee led an effort to improve the town’s blight ordinance after a long dispute over blight conditions on Hunter Ridge Road, but progress eventually stalled and it was tabled.

“There seemed to be misinformation that gathered strength, that the town didn’t have a blight ordinance — that it didn’t exist,” Kellogg said. “The town attorney looked into it. Yes, there is an ordinance. There has never been a moratorium on enforcement. We always follow up on complaints.”

L&A recently took up the issue again with the goal of clarifying the definition of blight, improving enforcement and the appeals process, and making it more consistent with existing regulations.

During a meeting held in Room 204 of Monroe Town Hall last Monday, Lieto distributed copies of the current ordinance and a rough draft to go over. Following a discussion, the committee decided to review the material and include it on the agenda for the next L&A meeting.

The Town Council will hold a public hearing before a vote on adopting any changes to the ordinance, but Councilman Jason Maur, a member of L&A, asked if the committee should garner public input before coming up with its proposal.

“There is precedent,” Lieto said. “L&A has done that before. I think it was on blight.”

Lieto served on L&A when he was on the Town Council years ago and took part in the last effort to improve the ordinance. He has also researched the blight ordinances of several towns.

Town Councilman Jonathan Formichella, who chaired the L&A meeting in Councilman Kevin Reid’s absence last Monday, said they should firm up their position first, then determine the best way to seek public input.

Of course, L&A’s meetings are also open to the public, Lieto pointed out.

Among the definitions of blight outlined in the town ordinance is abandonment.

“There needs to be a distinction between abandonment and neglect,” Kellogg said.

Just because nobody is living or working at a property, it does not necessarily mean it is not being maintained, according to Formichella. “Do we need the word abandoned in our ordinance?” he asked.

“I don’t think we do,” Lieto replied.

This is an example of efforts to improve the definitions of blight.

Maur asked if there could be financial incentives for property owners to comply with the ordinance, such as waiving the penalty fees.

Chapman said hearing officers for zoning complaints can waive some or all of a fee at their discretion, depending on the resources the town spent resolving it.

The L&A committee also wants to review the fee structure. Lieto said he believes the fees cannot be above $250 per day. Monroe’s current ordinance has a $100 per day fee for violations.

Chapman said some complaints turn out to be zoning or wetlands issues, in which the town has developed good processes for handling appeals, with a hearing officer.

Town officials want the process for handling blight complaints and appeals to be just as effective.

When Chapman receives a complaint, he said he determines if it is a zoning, wetlands or health issue. When he determines it is blight, he gives the person who complained an idea of how long it usually takes to be resolved.

Throughout the process, Chapman said he tries to keep them up-to-date as reasonably as possible.

“We try to follow a consistent pattern, so we can’t be accused of giving someone special treatment,” Chapman said.

When a town is successful in resolving blight issues, public health and an area’s improved appearance are not the only benefits, according to Schultz.