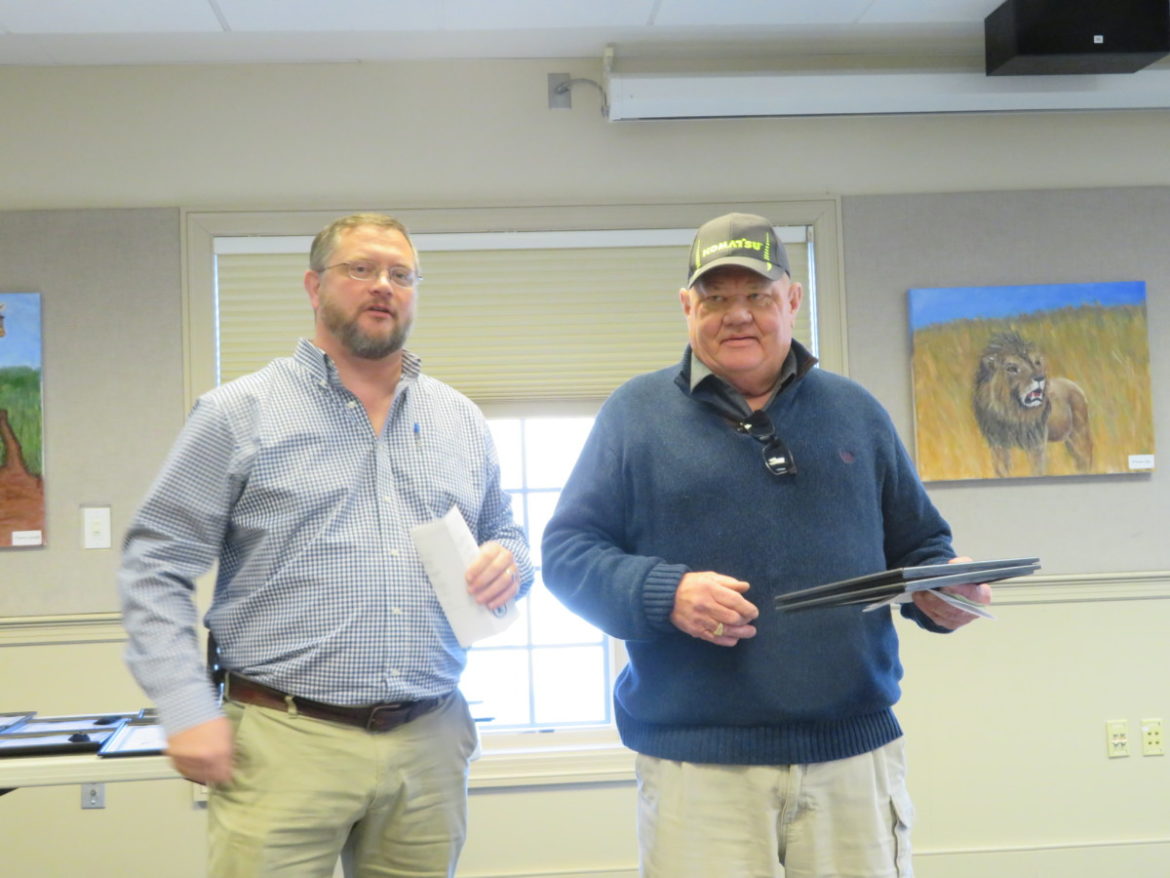 Among those recognized were Town Hall employees who account for every penny in the town’s finance office, highway crew men who plow and repair the roads, senior center and library staffers who serve patrons and police officers who make neighborhoods, schools and businesses safe.

“Thank you for making our residents’ lives better,” Kellogg said to the close to 40 employees gathered in the Ehlers Meeting Room. 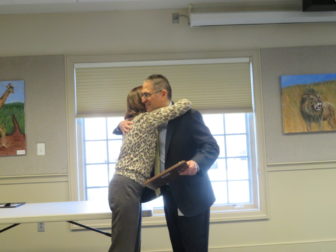 The first selectman gave special recognition to Human Resources Director Catherine Lombardi for her 15 years of service, saying it was bittersweet because she will be leaving the town for a new opportunity. Lombardi is the one who organizes the ceremony every year.

Lombardi thanked everyone she has worked with through the years and Kellogg read a proclamation declaring Dec. 18 to be Catherine Lombardi Day.

Outside of work, she volunteered at the Monroe Food Pantry. A cancer survivor, Lombardi hosted a town team with the American Cancer Society’s Relay for Life for many years. 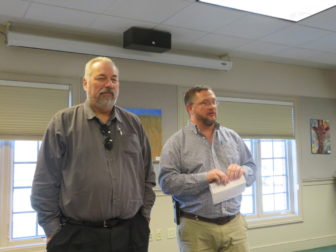 William Phillips, left, is recognized by Public Works Director Chris Nowacki for his fives years of service to the town.

“When Bill came here, he took over the reins when I had a health issue,” Nowacki said.

He touted Phillips’ experience from having worked in New York. “It’s good to have him as a sounding board to bounce off ideas, talking about our future outlook and planning for the year,” Nowacki said.

On a personal note, he said Phillips is a talented cook, making turkey and eggplant parmesan. “He’s a caring guy who keeps his staff in the forefront,” Nowacki said.

Highway Supervisor Jim Robinson recognized Robert Wakeley for his 20 years of service to the town.

When Wakely was hired, Robinson said his friends described him as “the salt of the earth,” and since then he said Wakeley has done whatever he has asked of him.

Robinson also recognized Anthony Dombrowski for his 30 years of service. “When I send Tony out to fix something, Tony gets it done,” Robinson said.

Gerald Pison has worked for the town for 25 years. Robinson said Pison’s father came to him when his son was working at D’Addario Buick, recommending Pison as a mechanic.

“There’s nothing he won’t do or can’t do,” Robinson said of Pison. “He keeps things running.”

David Clark has worked for the Highway Department for 20 years. “He can build a catch basin and drive a truck,” Robinson said. “He evolved as a mechanic and is at a level where he can work at any dealership.”

Nowacki recognized Robinson for 25 years of service. “Jim and I have been through a lot,” he said, recalling a Thanksgiving storm, a Halloween storm and a blizzard.

Nowacki said Robinson gets things done. “Thank you for your contribution to the town and dedication for 25 years,” Nowacki said. 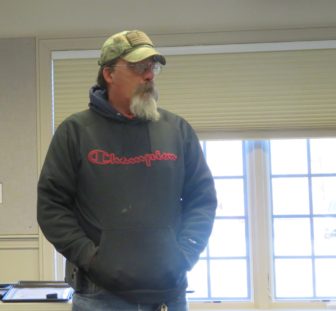 Jack Eck has served the town for 20 years in the Parks and Recreation Department.

Tice said he first got to know Eck, while working together at the Connecticut Golf Club. If irrigation is needed, he said Eck is the guy you want doing it.

Tice looked at Eck and said, “there’s nothing we can’t fix together. I mean that.” 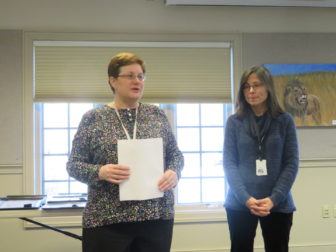 Children’s Librarian Michelle Turbak recognized Wendy Fox for her five years of service. Fox started out as a part-time library aid and went on to become a full-time library assistant in the Children’s Department.

Turbak said Fox leads a weekly preschool program, programs for older children and helps with the summer reading program. “She does our book displays, our bulletin boards and our cataloguing,” Turbak said. “Wendy notices what needs to be done and she does it.”

The first selectman recognized Gail Wood, a library employee of 20 years. He read comments from Library Director Lorna Rhyins, whose nickname for Wood is “Momma Gail.” Rhyins said, “Gail comes in every day with a can-do approach and a sunny disposition.” 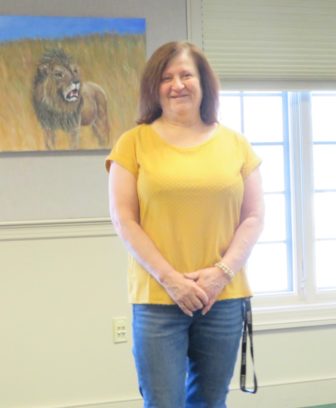 “Gail is the technical services manager, but really she is a jack of all trades,” Rhyins said. “She is a creative thinker. She’s kind and gives great customer service.”

Sally Koczy started out as a library volunteer before becoming a part-time library aid. She was recognized for 10 years of service.

Turbak told the story of her own first day on the job as a part-time reference librarian. Turbak answered the phone and a woman on the other end sang “Happy Birthday” to her. It turned out to be Koczy, who had meant to wish another co-worker a happy birthday that day. 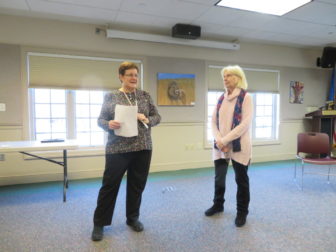 “I thought how this is going to be a wonderful place to work,” Turbak said of the gesture. “Sally is very thoughtful and caring with our patrons, knows them by name and greets them when they come in.”

Koczy works at the circulation desk.

“I just want to thank you for your 10 years of service and for always being willing to help out,” Turbak told her. 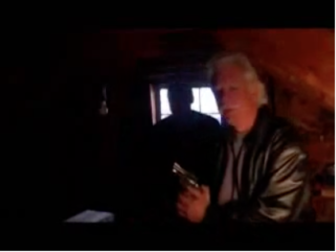 Phillips said Stephen Wolf, who was recognized for 15 years of service, is in charge of maintaining the town’s buildings, including the senior center, library, Town Hall and the police department, the Monroe Food Pantry and the firehouses.

“Steve has starred in a B movie, ‘Moto Psycho,'” Phillips revealed. “Look it up on the Internet and you can see the talent this man has.” 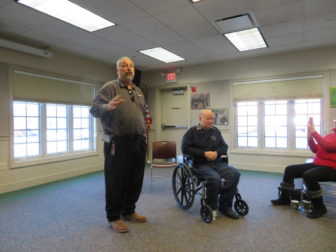 Harry Whitcher, right, expects to be back to work soon, performing maintenance at Town Hall.

Among his lengthy list of responsibilities, Whitcher makes repairs, cleans offices, fills the copier machines and locks up the building. He was in a wheelchair on Wednesday, but said he expects to be back to work soon.

“Harry, get better quick,” Phillips said. “I want you back.”

Hemlata Khona has worked part-time in the Tax Collector’s Office for 15 years.

Ruth Ann Caiola, who has worked in the Assessor’s Office for 20 years, could not make the ceremony. 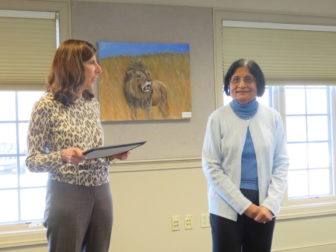 “She is an asset to the town,” Lombardi said.

The employee honored for the longest tenure of those recognized Wednesday was Carol Buckholz, who worked in the Finance Department for 35 years.

Deputy Finance Director Heidi Meade said Buckholz is a very professional person, who is special to the town. Buckholz works hard juggling payroll and receivables, Meade said of her tasks.

“She’s a wonderful person, who works well with all of you,” Meade said. “Though Carol is petite, she has the biggest heart.”

“I’m blessed to have both of these ladies here,” Bunovsky said of Buckholz and Meade. “Thank you both.”

Henna Ali, director of community and social services, said Robert Scopoletti has always thought of others and how he can help the community during his five years working at the Monroe Senior Center.

Ali asked staffers how they would describe Scopoletti and was told he is helpful, reliable, smiling and generous with a heart of gold.

Veterans of the MPD 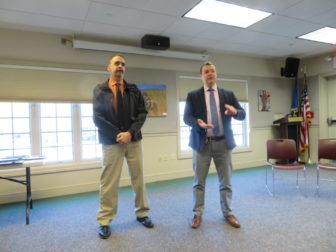 Police dispatcher Roger Connor has been serving the town for five years. Police Lt. Stephen Corrone said Connor, who was in communications for the U.S. Navy, works midnight and evening shifts.

Connor also has experience as chief of Newtown Volunteer Ambulance. He is president of the clerical union for the majority of civilian staff and Town Hall employees.

Captain Keith White recognized Corrone for his 15 years of service. Corrone was president of the Fairfield County Detectives Conference and continues to be a major driver in the training of detectives, especially new detectives in the region.

Chief John Salvatore said Corrone develops lines of communication for cooperation and information sharing with police departments in the region.

“He is routinely one of our highest performers, accounting for 64 DUI arrests and 35 narcotics arrests during his tenure,” White said. “Officer Johnson also went through extensive and challenging training to become a drug recognition expert.”

“In 2016 he was recognized as the Monroe Police Department’s Officer of the Year for his accomplishments,” White said. “Officer Johnson does not shy away from work or opportunities to better himself and the department and he has proven to be a tremendous asset to the town of Monroe.”

He said Chaves, who has served for 15 years, is one of the leading computer forensic experts in the state and is Monroe’s longest tenured detective. Chaves is also an adjunct professor at Sacred Heart University.

McKellick said he has seen people in the hallway from state, federal and local law enforcement agencies bringing cellphones and computers for Chaves to work on and help their investigations.

Buckley, a 15-year-veteran, is Monroe’s youth investigator and is assigned to investigations involving youth, sex assaults and victims from vulnerable populations. She runs the evidence room and is the department’s point of contact for the Juvenile Review Board, DCF and the Center for Family Justice.

McKellick said Buckley started out as a dispatcher for a year before becoming a police officer and has pitched in when needed.

McKellick said Lazzara, a 20-year-veteran, was a field training officer, who trained a good number of Monroe’s officers.

Lazzara is a general detective, which McKellick said is a misleading title due to all of the types of cases that come across his desk, including assisting the fire marshal on arson investigations.

McKellick said Lazzara answers the phone at the worst hours and, as one of the department’s top two officers for processing crime scenes, he knows how to photograph and process evidence. 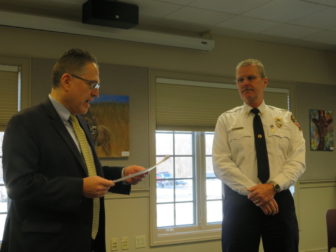 Kellogg recognized Fire Marshal William Davin, who has served the town for 15 years, praising him for his many certifications. Davin has training as a blood borne pathogens instructor.

Davin is a safety officer for the Connecticut Fire Academy. He has FEMA disaster management training from the National Fire Academy.

“He brings a lot of credentials and serves on the Safety Committee here,” Kellogg said. “He goes to the schools and teaches fire safety. Bill takes his job and profession very seriously, but he doesn’t take himself very seriously. He brings a dry sense of humor to the job.”