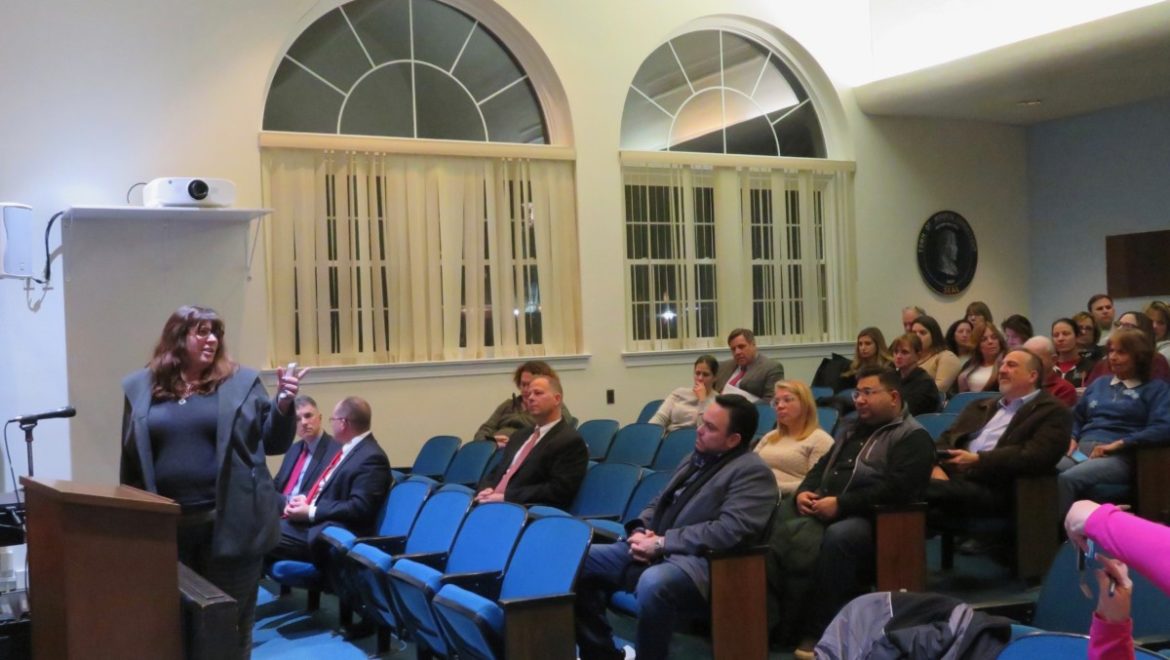 Donna Lane, chairwoman of the Board of Education, speaks at a special Town Council meeting on the teachers' contract Tuesday night.

A special Town Council meeting on the new teachers’ contract attracted close to 60 people Tuesday night, mostly educators and supporters asking for a vote approving, what they say, is a fair deal for both sides.

However, Board of Finance Chairman Michael Manjos submitted a letter urging the council to deny the deal, in a year when the school board is grappling with an estimated budget deficit of $1.5 million.

Town Council members, who had just received copies of the 81-page-contract earlier in the day, took no action Tuesday night. Instead, the contract will be on the agenda for its meeting on Monday, Jan. 13.

Lieto said the council has the option of approving the contract, denying the contract and going to arbitration, or doing nothing and allowing the agreement to be deemed accepted on Jan. 16.

In all of his years serving on the Town Council, Lieto, the former chairman, said the council has never taken action on a teachers’ contract.

Jeff Seymour, president of the Monroe Education Association, said the agreement was hammered out through hours of mediation. It is signed by him and Board of Education Chairwoman Donna Lane.

“The mediation process is not designed to create winners,” Seymour told council members from the podium. “None of us left the meeting feeling like we won anything, but the contract is fair. We believe these are really fair numbers and if we go to arbitration, I don’t think any of these numbers will change.”

Seymour said the gross wage increase for Monroe’s teachers is just under 8.9 percent, while the average from 59 settlements in Connecticut since August is 9.14 percent.

“We’re below the average,” he said. “There’s nothing outrageous about this contract.”

Seymour said teachers’ copay for health insurance was 21 percent, but when the Board of Education was hit with a high number of claims in its self-insured health care plan, it wanted to switch to the state plan during the year to find savings.

To entice the MEA to reopen their contract and support the change, the school board offered to reduce the co-pay from 21 down to 18.75 percent.

Manjos said there will also be an additional $11,467 per year in stipends and said the health care savings in years two and three is misleading, because insurance costs will increase every year. He noted this year’s increase is 10 percent.

Monroe’s average teacher salary is eighth highest in the state and the third highest in the District Reference Group of comparable towns, according to Manjos.

He said teachers are already paid well and a one percent lower salary increase would allow for smaller class sizes without the youngest teachers having to be fired, so everyone else could earn one percent more.

“We can’t expect the taxpayers to support significant mill rate increases, and historically we have only been able to pass budgets at a 2.5 percent increase or less,” Manjos said in his letter. “I would suggest that you ask the Board of Education to provide a detailed list of what it will take to get down to this level and how many staff they are prepared to eliminate.” 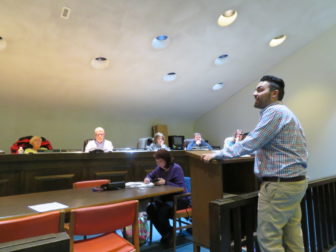 Nick Kapoor, a school board member, expresses his support for the teachers’ contract at a special Town Council meeting Tuesday night.

During the public comment portion of the meeting, Lane told the council how attorneys compiled a thick book of data that was used in the mediation process.

“The mediation was conducted fairly,” she said. “We believe it was a fair award. It was unanimously approved by the Board of Education.”

Sue Koneff, a retired teacher and former officer in the MEA, said she heard rumors that the Town Council was going to reject the contract and warned that could lead to the firing of five to seven teachers.

“What will happen if this contract is rejected tonight?” she said. “First, it will cost the town about $100,000 to go to arbitration. Secondly, the council runs the risk of having to pay even more in any settlement arrived at in arbitration. The arbiter’s decision is final.”

Because Monroe has an undesignated fund balance of over $12 million, Koneff said it is unlikely the arbiter would lower the salary increases due to the town’s ability to pay.

“The teachers in Monroe are dedicated to their profession and to this town,” Koneff said. “Last year, they were asked to open their contract a year early and change their health insurance to save the district and town money, even though this change was a rate increase for them.”

“For this generosity, are they to be rewarded with a rejected contract, which was negotiated in good faith?” Koneff asked. “I say no. Council members, do not reject this contract. Support quality education in Monroe.”

Nick Kapoor, a Board of Education member speaking as a private citizen, urged council members not to punish teachers for a bad budget year. “I believe they deserve your respect and support,” he said.

Barbara Fahr, of Meadows End Road, noted how Town Council members just received copies of the contact that day. She asked them not to feel pressed to vote that night.

And if they do eventually take a vote, Fahr said it is not just about the teachers. She asked council members to do their best to understand the contract and its implications on the entire community.