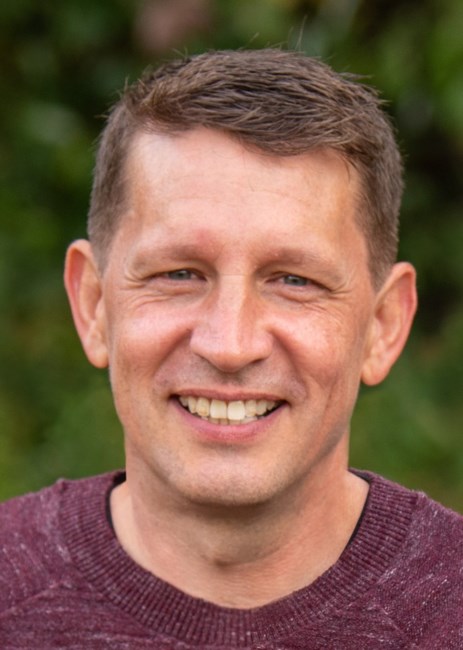 Todd Michael Kuhns, loving father, dedicated husband and avid hiker, was released from his short battle with cancer on May 5, 2022, at home with his devoted wife by his side in Monroe. He was 50 years old.

Todd is survived by his wife, Sarah (Wilk); his sons, Braden (13), Jack (6), Alex (4), and his daughter Lily (8); his brother Joe (Karissa) and his mother, Marie. He is also survived by his aunts, uncle, many cousins, mother and father-in-law, brothers and sisters-in-law, and their families, including many nieces and nephews. He is preceded in death by his father, Mark.

Todd was born in Milwaukee, Wis., and grew up surrounded by a large, close-knit family. He spent endless summers and holidays with his family and cousins at his grandparents’ and cousins’ homes, where he enjoyed sledding, fishing and camping. He moved several times throughout his childhood but always found his way into sports, hobbies, and a bit of mischief, creating long-lasting relationships along the way.

He graduated from Fairfield High School in 1989 before attending Johns Hopkins University, where he graduated with a Bachelor of Arts in 1993. After college, Todd explored the central and northeast coast and found peace in nature. Whenever life threw him a curve, he could be found alone, on the Appalachian Trail, collecting his thoughts and finding accord with the world around him.

Todd was incredibly passionate about his career in technology, developing and maintaining advanced systems at some of the greatest financial companies in the world. He would spend endless hours tinkering, reading and learning the latest and greatest tech, whether for home or the office. Todd was most recently employed at Northwestern Mutual as a Senior Director of Prioritization and Planning.

Todd’s priorities began to change once he met his wife, Sarah, and their children were born. He began to focus more on home, community and building a legacy. His passions carried into his parenting from teaching the children to garden, biking on local trails, watching “Star Wars”, camping in the summer with friends, or just cheering from the sidelines as the kids played the same sports Todd played as a child.

His dedication and commitment to his family were noticed and admired. Never missing a moment, Todd was the father everyone wished they could be. He was the best son, brother, husband, uncle, nephew, cousin, brother-in-law, coach, colleague and friend to all who knew him. His calm and kind demeanor grounds and balances his family today. His legacy will surely thrive.

Friends and family are encouraged to visit Todd’s Kudo Board to leave messages, memories and condolences. The Kudo Board can be found at https://www.kudoboard.com/boards/Uo8UuWWS