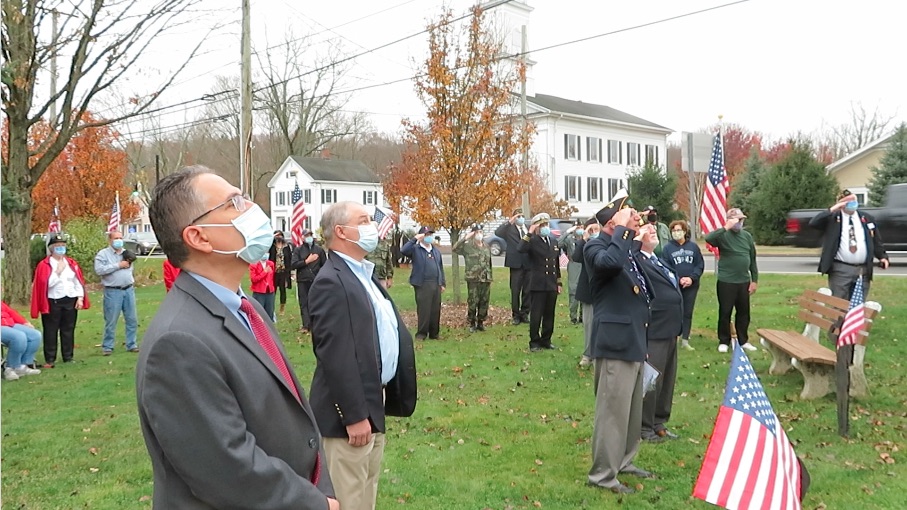 The crowd gathered on Stepney Green watches as the American Flag is lowered to half staff during the Veterans Day ceremony Wednesday morning.

MONROE, CT — No patriotic songs were sung and no luncheon was held after American Legion posts 176 and 160 held their annual Veterans Day ceremony on Stepney Green Wednesday. But the pride and gratitude for all the men and women who served in America’s armed forces was felt from members of the crowd that showed on the warm, cloudy morning, all wearing masks, and through the words of those who spoke.

Though the COVID-19 pandemic placed limitations on some of the annual traditions, Victory Yanosy, commander of Sippin-Winspur Post 176 in Monroe, said everything went well under the circumstances.

“It was a nice crowd and the weather held up for us,” he said. 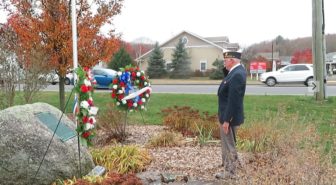 Victor Yanosy, commander of American Legion Post 176 in Monroe, lay a wreath at the World War I Memorial on Stepney Green Wednesday.

“I want to share everyone’s disappointment at our inability to really be able carry out the traditions that we’ve wanted to,” Kellogg said of Monroe’s annual events, such as the  Memorial Day Parade. “This pandemic continues to be a source of pain and loss to many of us, but it’s also, perhaps, taught us something as well.”

The first selectman spoke of the restrictions on residents’ daily lives, such as limits on social gatherings and on the types of businesses that can stay open.

“Those restrictions may have been implemented for good reasons — we understand that,” Kellogg said. “But it’s difficult for us as Americans, because for most of us COVID has taught us what it’s like to live without some of our basic freedoms.”

Someday the pandemic will be over and Americans will be able to return to their normal lives, Kellogg said, but he asked that we remember that many people in the world will never have those same freedoms we all enjoy. 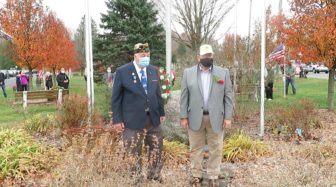 Donald Whiteley, left, and Frank Bent of the Monroe Lions Club lay a wreath during the Veterans Day ceremony on Stepney Green Wednesday.

“For our veterans, our most humble gratitude because it is with their sacrifices that those freedoms that we enjoy are possible,” he said, “so to our veterans, we salute you and we thank you.”

“I find today to be particularly poignant, because I think it reminds us that, as Americans, we have way more in common than any of our differences,” Bindelglass said. “We have a way of light that’s unique in the world and it’s unique in human history, and we owe that way of life to those who have fought and given their lives to preserve it, and to those who continue to fight for us today to preserve our way of life. And this day is in their honor. We honor their memories and we honor those who are still in service to us for their service.”

Rodgerson told the crowd how President Woodrow Wilson proclaimed November 11 as the first commemoration of Armistice Day in 1919 to honor the pride and heroism of those who died in the country’s service. An armistice had been signed to end World War I, once regarded as “the war to end all wars.” Armistice Day later became known as Veterans Day.

Rodgerson also asked everyone to remember Charles L. Runman, one of Easton’s hometown veterans who served bravely in the Army Air Corps in World War II and went missing in action, before later being declared dead in October of 1943. Runman, the namesake of Easton’s American Legion Post, was the recipient of many honors for heroism, including the Purple Heart.

The Rev. Kevin Merritt, pastor of Stepney Baptist Church, gave the invocation at the start of the ceremony and Father Ardan Rodriguez, pastor of Our Lady of the Rosary Chapel, led everyone in the closing prayers.

Both men prayed for the protection and safe return of the men and women serving overseas.

Frank Bent and Donald Whiteley of the Monroe Lions Club and Yanosy lay wreaths by the World War I Memorial and the American Flag was lowered to half-staff.