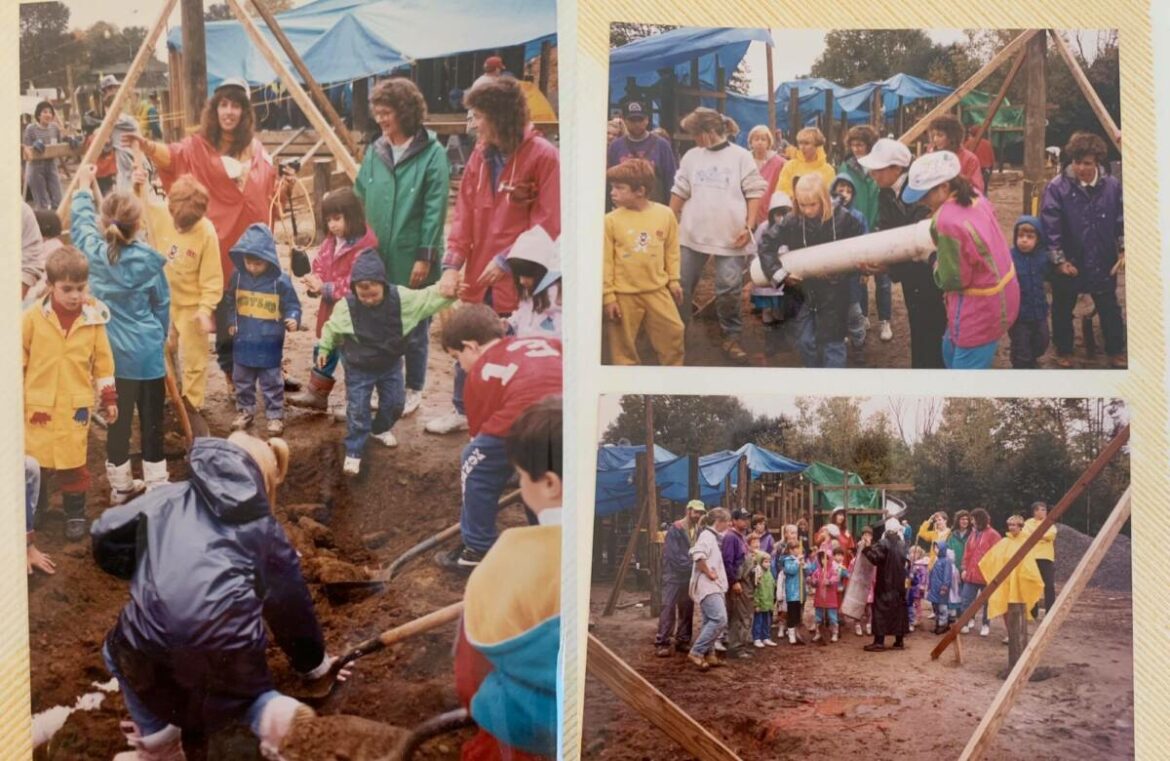 Alice Pulliam, who served as chair of the Kids Kreations Playground building committee, shared photos of volunteers burying a time capsule at the construction site in 1992.

MONROE, CT – A worker using a backhoe to take down the old, wooden Kids Kreations Playground at Wolfe Park, to make way for The Wolfe’s Den playground, uncovered a time capsule buried by children and families when Kids Kreations was built in 1992. The capsule has been placed in storage and its contents remain a mystery.

“None of us know what’s in it,” said Michael Ganino, vice chairman of the Monroe Playground Foundation, which is leading the project for the new playground. “We know it’s in good condition and the items inside are dry. We’re all very excited to see what was placed in the time capsule in 1992.”

“In 1992, when the playground was built, the founders and volunteers put together a time capsule filled with all the items the kids and families wanted and it was sort of forgotten,” said Dan Keene, chairman of the MPF.

The mystery will be solved when the capsule is opened in the Council Chambers of Monroe Town Hall on Tuesday, March 29, at 6:30 p.m. The event will also be live streamed so curious residents can watch the unveiling of the contents from home.

“I really don’t remember what’s inside the capsule,” she said Saturday. “I look forward to seeing what’s in that capsule.”

The Monroe Playground Foundation continues to host fundraising events to raise money for the new playground, which will be accessible to children of all abilities. To make a donation, click here.

It is all leading up to a community build scheduled to run from Tuesday, May 10, through Monday, May 16. For information or to volunteer, visit the foundation’s website at www.monroeplaygroundfoundation.org.

Volunteers for The Wolfe’s Den are planning to bury a time capsule of their own for the new playground, which will have an estimated time span of 50 years.

“The time capsule will be scheduled to be opened in 2072,” Ganino said.

Of its contents, Keene said, “we envision something representing our time period in Monroe from kids, businesses and families. People will have a good idea what life was like in Monroe in 2022. We’ll ask people what they want in it. They will have the honor of placing an item in there.”

“It’s going to be a coming together of the board of 1992 and now,” Keene said. “We’ll get as many of the original committee who built the Kids Kreations Playground as we can.”

Pulliam, who now lives on Bantam Lake, said only a few volunteers from the 1992 playground committee still live in Monroe.

“I’m looking forward to March 29th and I’m really hoping to see some of the original committee there, some who I haven’t seen in many years – and I’m sure we all look exactly the same,” Pulliam said.

The Monroe Playground Foundation managed to save the dedication signs from the original playground and Pulliam volunteered to restore the primary one.

The March 29 event will include a presentation of the restored sign and a question and answer period. Volunteers can also sign up for the community build for The Wolfe’s Den in May.

“The original restored dedication sign for the Kids Kreations Playground will be displayed at the new playground,” Ganino said.

Pulliam is touched by how the new building committee is honoring the 1992 committee she and others served on.

“These people are really, really busy and for them to take the time to honor this group of people, who worked so hard to initiate the Kids Kreations Playground … how wonderful of them to that?” she said, “it’s so gracious and so kind and I hope in return we’ve been helpful.”

Past volunteers have offered the MPF advice for the new project. For example, Pulliam said she told them how they went about obtaining 501c3 nonprofit status.

In addition to displaying the restored dedication sign at The Wolfe’s Den when it is built, a piece of the old playground known as The S.S. Pulliam will also be restored as a decorative display.

In 1992, Pulliam’s husband, Lewis, focused much of his efforts on a wooden boat for children to play on during the Kids Kreations community build. “They burned ‘S.S. Pulliam’ into the boat as a surprise for my husband and I,” Alice Pulliam recalled.

Pulliam remembers the long hours volunteers dedicated to planning and raising funds for the Kids Kreations Playground. At times the organizers wondered if it would ever get built. Then Pulliam worried there would not be enough volunteers for the community build.

But it all came together.

“It was a magical week,” Pulliam said. “We had over 2,000 volunteers come for the community build. It was absolutely amazing.”

Food was donated for the participants and some, who planned to work for two hours, ended up staying the whole day, according to Pulliam. She said volunteers formed bonds with each other, leading many to come back to see the project through.

When the Kids Kreations Playground was torn down to make way for the new playground, original committee members were sad to see it go.

Pulliam said she was going to go see it, but then thought, “no, it’s too painful.” Pulliam added that she and other volunteers from that time were in tears while talking about it over the phone.

Though Pulliam said she wishes the Kids Kreations Playground lasted longer, she added how thrilled she is that volunteers are going to build The Wolfe’s Den in its place.

“What a blessing,” she said. “It’s another tribute to how important that playground is for Monroe. You can tear it down, but you build it back better. It’s a safe place for your children to play and your friends and family to meet.”

Pulliam said a community build for a playground is a magical experience.

“Everyone is working toward the same goal and it’s for your children – and who doesn’t love their children more than anything?” she said. “It’s a lot of fun. A lot of laughs. A lot of good food. And even if you’re not skilled, it doesn’t matter. There’s a job for everyone.”

Pulliam said, “you can buy a playground and have it put in, or you can build a playground with the community – and when you do it that way, you’re building a community.”