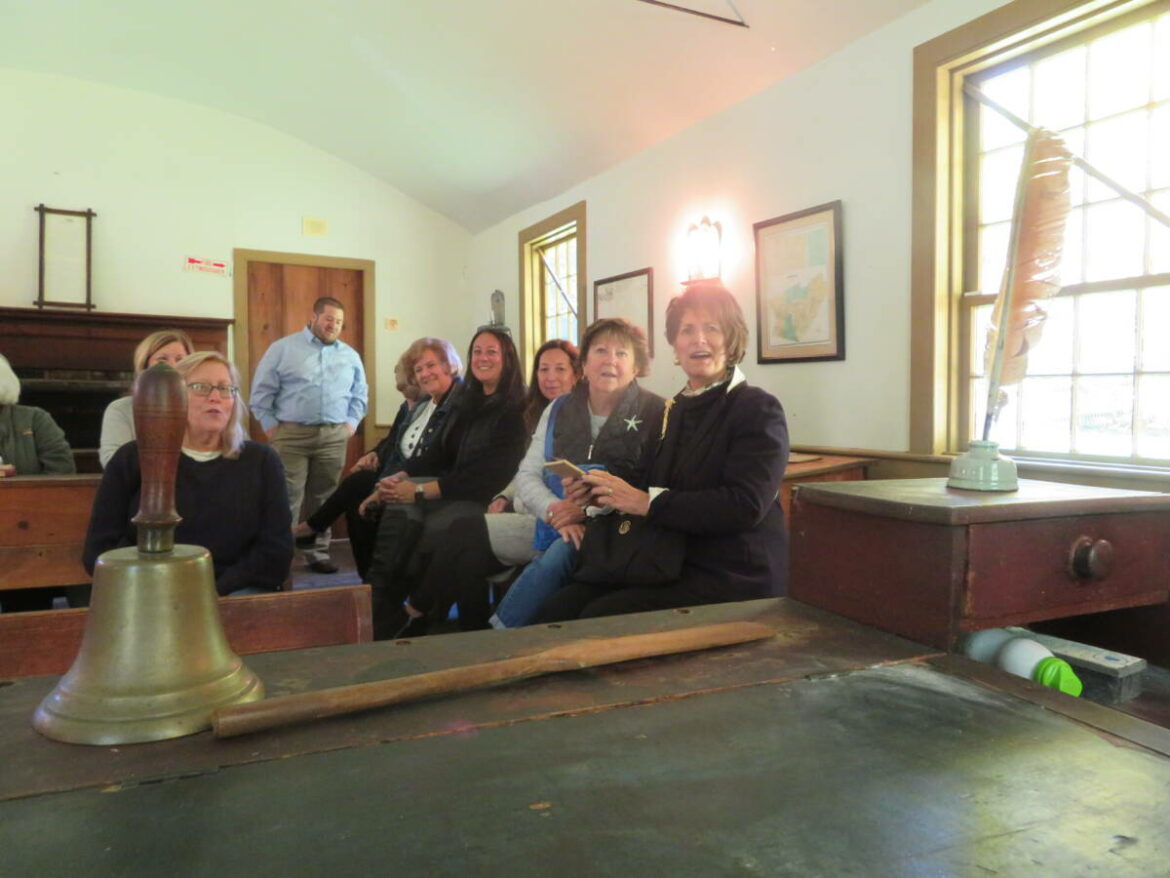 The late Nancy Zorena always stood behind the teacher's desk inside the East Village Schoolhouse. During a dedication on Saturday, for family and friends, her presence was still felt.

MONROE, CT — Though Monroe lost her this past summer, Nancy Zorena’s presence can still be felt by those who knew her best, from the decorations inside the historic East Village Schoolhouse and stories of fun times with close friends, to the positive influence the former Teacher of the Year had on the lives of students she taught in Monroe’s public schools.

During a private ceremony on Saturday morning, the Monroe Historical Society dedicated the East Village Schoolhouse in Nancy Zorena’s honor before a small crowd of over 20 family and friends. Zorena had succumbed to a brain tumor in late August after a long battle. She was 76. 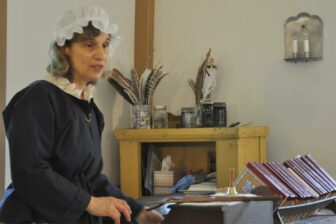 Nancy Zorena could often be seen behind the teacher’s desk of the East Village Schoolhouse, wearing period clothing. Photo by John Babina

Zorena was well-known in town for her 35 years as a teacher and over four decades of involvement in the Monroe Historical Society, where she had served as president.

Karen Cardi, current president of the historical society, presented a plaque at the schoolhouse during the dedication Saturday.

“The society thought that this is the most appropriate way that we can honor her for all her work,” Cardi said. “Her presence shows through this room in everything — all of her pictures. She set up the room and collected all the books and kids’ things. Everything in here is Nancy.”

“We’re so happy to be here,” Buckens said. “There are many happy memories. This will be our spot to come and remember our sister.” 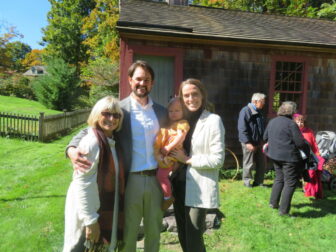 Kevin Daly, the Monroe Historical Society’s historian, also attended the event, in which  friends swapped stories over cookies and fruit punch on the lawn of the schoolhouse.

Peggy and Bill Fry, of Monroe, fondly recalled how Zorena changed their son Brian’s life as his kindergarten teacher at Stepney Elementary School long ago.

When the couple took their child out of his school in Bridgeport to enroll him at Stepney, Peggy said they told the principal that Brian was having issues of acting out.

Bill said their son was a smart kid. “He needed to be motivated,” Bill explained. “He had to get focused and, most of all, he needed to be challenged. He wasn’t being challenged in the other school.” 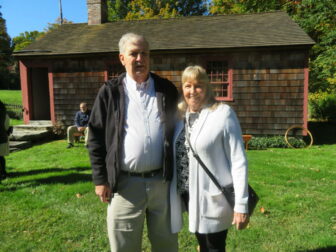 Bill Fry, left, and his wife, Peggy, remember Nancy Zorena for the positive impact the educator had on their son’s life.

Peggy said the principal, Ralph DeGruttola, told them, “we have the perfect teacher for your son,” before assigning Brian to Nancy Zorena’s class.

“She changed his life,” Peggy said. “She took him under her wing and coached him on how to deal with life — and he excelled with her. She brought out the best in him.”

Later in life, when Brian needed a letter of recommendation to get into Springfield College’s physician assistant program, it was Zorena who “wrote a beautiful letter” that got him in, Peggy said, adding Brian is now a PA in Suffield. 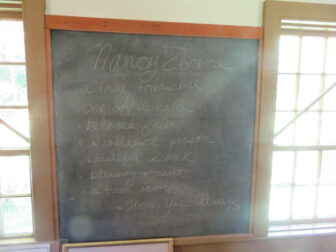 The chalk board inside the schoolhouse displayed nice comments about Zorena, which were taken from the Monroe Historical Facebook page

After the dedication in the classroom, several guests took turns coming to the front of the room to share stories about Zorena.

Rose Buckens remembers being in nearby Newtown on a weekday, when people would come up to her and ask, “why aren’t you teaching?”

“That was my sister Nancy. I guess we do look alike,” Buckens said with a chuckle.

Buckens’ two children used to go to Hands on History summer camps at the East Village Schoolhouse, a program Zorena started. While in colonial dress, Zorena showed children how to use quill pens, to create crafts and play old fashioned games.

Zorena’s involvement in community service lives on. Buckens has 100 Little Libraries and is part of the organization. Her granddaughter, Lauren Grace, 15, teaches art at the teen center in Wilton.

Bonnie Maur, a longtime friend of Zorena’s who used to teach with her, credits Zorena’s influence with her own community involvement. Maur founded Think Pink Monroe, a nonprofit that raises awareness and money to assist Monroe families affected by cancer.

Buckens and Maur collected 44 backpacks with school supplies for students in need in Zorena’s honor. Among the beneficiaries, Buckens said some new students came over from war-torn Ukraine.

Peggy Fry said her son, Brian, had joined Amy Spanbauer in being the first students to serve on the Board of Education, while growing up in town.

Deborah Samuels’ daughter Jessica has been best friends with Zorena’s daughter, Katie, since they met in nursery school, and Samuels and her husband Merv became fast friends with Nancy and Brian Zorena.

The families often got together for Sunday meals.

“Once we had food in the tea room and it was dessert time,” Samuels said. “I made brownies and Nancy tried it and said, ‘Deb, did you put salt in the brownies instead of sugar?’ Brian and Merv were laughing.”

As a prank, their husbands replaced the sugar with salt while Samuels was baking and put anchovy liquid on Zorena’s brownie.

“Whenever we went anywhere and there were brownies, Nancy said, ‘I’m not going near that,'” Samuels said, as the classroom erupted in laughter. “She couldn’t eat brownies for a long time.”

Samuels remembers many fun times, trips and holidays together over the years. “My sisters didn’t live here. I came from New York,” she said. “But I can tell you that Nancy was truly, truly, truly my sister.”

A teacher for life

Jason Maur, who is Bonnie Maur’s son, serves as a councilman in town. He said he asked for a moment of appreciation for Zorena, a former Monroe Outstanding Citizen, at the last meeting, which “everybody gladly gave.”

“Anyone knew if you knew Nancy, you had a teacher for life,” Maur said. “You feel her spirit here as you always did, because there’s no better dedication to Nancy than what’s inside these four walls.”

Maria Brandriff, another close friend of Zorena’s, remembers traveling with her. One destination was an island in Maine, where they stayed in a Victorian house with no electricity and no clean water — just gas lights. The two women talked a lot, while walking together.

“I felt Nancy’s passion for teaching and I felt her passion for Monroe and the historical society,” Brandriff said. “She always talked about it and it was obviously something that she held very dearly. I miss my friend. She was quite a wonderful and exceptional woman.”

Bonnie Maur remembers when Zorena “pulled” her into doing Odyssey of the Mind, which challenges children to be creative problem solvers.

“I said to Nancy, ‘what happens if we win?’ And she said, ‘don’t be ridiculous.’ I said, ‘well what if we do?’ She said we would go to Colorado. And didn’t you know, a week later we were fundraising to go to Colorado,” Maur said with a smile.

“We have incredible memories of doing all of these wonderful things,” Maur said. “I walked in here and I felt Nancy today. I really feel her here — and I just can’t imagine that we will live the rest of our lives without her. That’s heartbreaking to me.”

“When I think of Nancy, I think of a very inquisitive person, someone who just loved being spontaneous and was interested in all facets of life,” Rubenstein said.

When Rubenstein first met her, she said Zorena told her she was going to camp in a tent in Africa. Another time, Rubenstein said Zorena shared a story of celebrating Thanksgiving at an inn in Massachusetts, where the turkey was cooked in a fireplace and everything was done like the olden days.

Rubenstein recalled bringing her daughter to Hands on History, where Zorena taught children how to make handmade candles and soap. Her daughter had made a cloth picture of the schoolhouse with Zorena, which Rubenstein still displays in her kitchen.

“Don’t forget the ice cream,” Bonnie Maur called out from the back of the classroom, while reminiscing about Zorena teaching children to make homemade ice cream.

Rubenstein shared fond memories of the handmade Christmas ornaments children made at the schoolhouse.

“I think of the house tours in Monroe,” she said of another historical society event Zorena organized around the holidays. “They surpassed every other town.”

During one house tour, Rubenstein accidentally left wearing someone else’s pair of Uggs. Zorena figured out what happened, called her a week later, then drove to her house to make the switch.

One of a kind

Though she lives in Easton, Dolly Curtis, who befriended Zorena many years ago, joined the Monroe Historical Society because of her influence and she marveled at Zorena’s teaching style after visiting her classroom one day.

Curtis recalled how they and their husbands often ate together and the time she and Zorena went to a Broadway show featuring Ricky Valli and the Four Seasons, before the musical became a huge hit.

“She was one of the most genuine people I ever met and she gave her heart to Monroe,” Curtis said. “She never hesitated. She was always focusing on a project that would help Monroe, and her emphasis was on the historical society. I never met anyone like Nancy Zorena and my heart is breaking.”