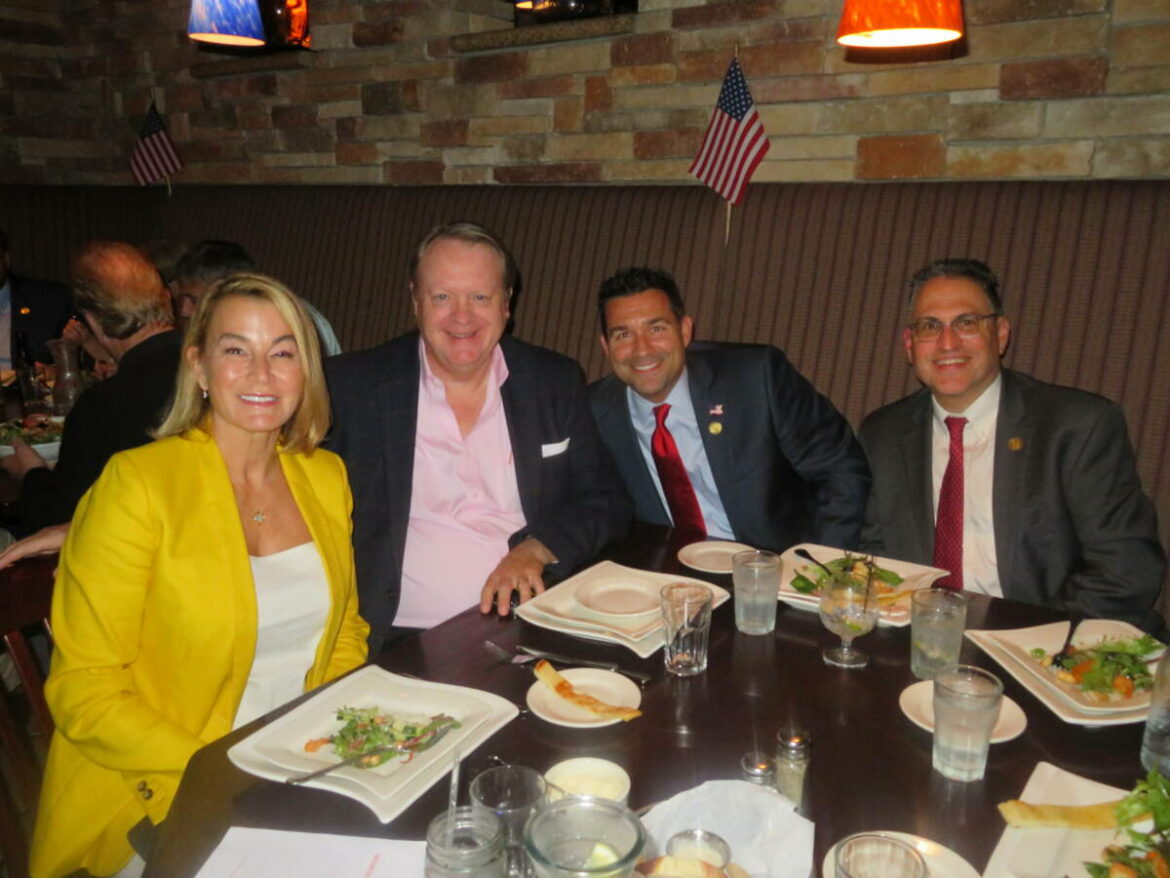 MONROE, CT — Themis Klarides, the former House minority leader, who has an exploratory committee in place to test the waters for a run for governor next year, headlined a Monroe Republican Town Committee fundraiser at Vazzy’s Osteria on Main Street Tuesday night.

Klarides criticized President Joe Biden and Gov. Ned Lamont for, what she says is, a lack of focus on the economy, while they try to keep people safe and healthy during the COVID-19 pandemic.

She told the close to 100 dinner guests that the Democrats’ attitude about trying to fix the lagging economy amid the pandemic is, “I can’t do anything about it.”

Kellogg, who is running unopposed this year, is at the top of the Republican ticket in the municipal election to be held on Nov. 2.

When it was Kellogg’s turn at the podium he touted the town’s response to the pandemic, while continuing efforts to grow Monroe’s commercial tax base, making infrastructure improvements to town roads, and recently breaking ground for the building project at the Monroe Volunteer Emergency Medical Service’s headquarters.

Kellogg said the town’s leadership is controlling taxes, keeping the mill rate “low and fair,” while “delivering so many essential services.”

“None of that happens without this team in this room,” he said. “It is everyone that’s involved. I don’t care what board or commission you’re on. I could not be more proud to be on this ticket with the rest of the Republicans. We have a strong team. It is proven leadership. We’re going to work as hard as we ever have, but I know we will be victorious once again.”

RTC Chairwoman Deborah Heim asked everyone to get out on election day and support their candidates. Vida Stone, the incumbent town clerk, read the names of all of the GOP candidates, as each one who was present stood for a round of applause.

Republicans slate is as follows:

Board of Finance: Greg Beno and Michael Manjos

Rooney, who organized the fundraiser, urged Republicans not to be silent in these changing times when the pandemic is being used as a political agenda and cancel culture threatens to take away more freedoms.

“Monroe is a stalwart Republican town at the Presidential level with the longest streak of supporting the GOP in Fairfield County,” Rooney said. “Monroe has not supported a Democrat for President in over 60 years. The roots of Monroe are Republican and we’re all here to make sure it stays that way.”

State Rep. Tony Scott, R-112th, agreed, but reminded his fellow Republicans not to be complacent.

“This is a Republican town. Let’s keep it that way,” he said, “but just know the Democrats are not rolling over.”

“They threw everything out at us and we defeated them,” Scott said. “But that does not mean they’re not going to continue to do the same as we go into November. So let’s make sure we stay on top of things. Make sure we’re doing the right things for Monroe and for our morals that we’ve established as Republicans — and keep moving forward.”

Starting at the grass-roots

Klarides said Connecticut needs new ideas and leadership. She criticized the governor for his stance of supporting tolls for cars and trucks, for not delivering on his promise of property tax relief, and said he is “out of touch with what’s going on in Connecticut.”

“Can anyone explain to me why a governor needs to have absolute authority when the legislature is actually in session?” Klarides said of the upcoming vote to extend Lamont’s executive powers. “He doesn’t have to do this on his own.”

Klarides said the Legislature passed a minority budget for the first time in 2017, while alluding to a bipartisan compromise “that included elements of proposals long sought by the GOP, including revisions to prevailing wage and binding-arbitration laws, as well as new language for caps on spending and borrowing by the state,” according to an article in The Connecticut Mirror.

She said Republicans had been pushing for bonding, spending and volatility caps for decades and credits it for Connecticut’s full “rainy day fund” and recent controlling of spending and borrowing.

“That’s why it’s so important to elect Republicans, because then the state can run like Monroe runs with Ken Kellogg in charge,” Klarides said. “And really, it’s true the majority of towns in Connecticut are run by Republicans and the towns are run better than the state every day of the week.”

“It’s a grass-roots approach, because it starts from the bottom up,’ she said of the importance of municipal elections. “What happens in November is a precursor of what will happen next November.”

2 thoughts on “‘This is a Republican town. Let’s keep it that way.’”