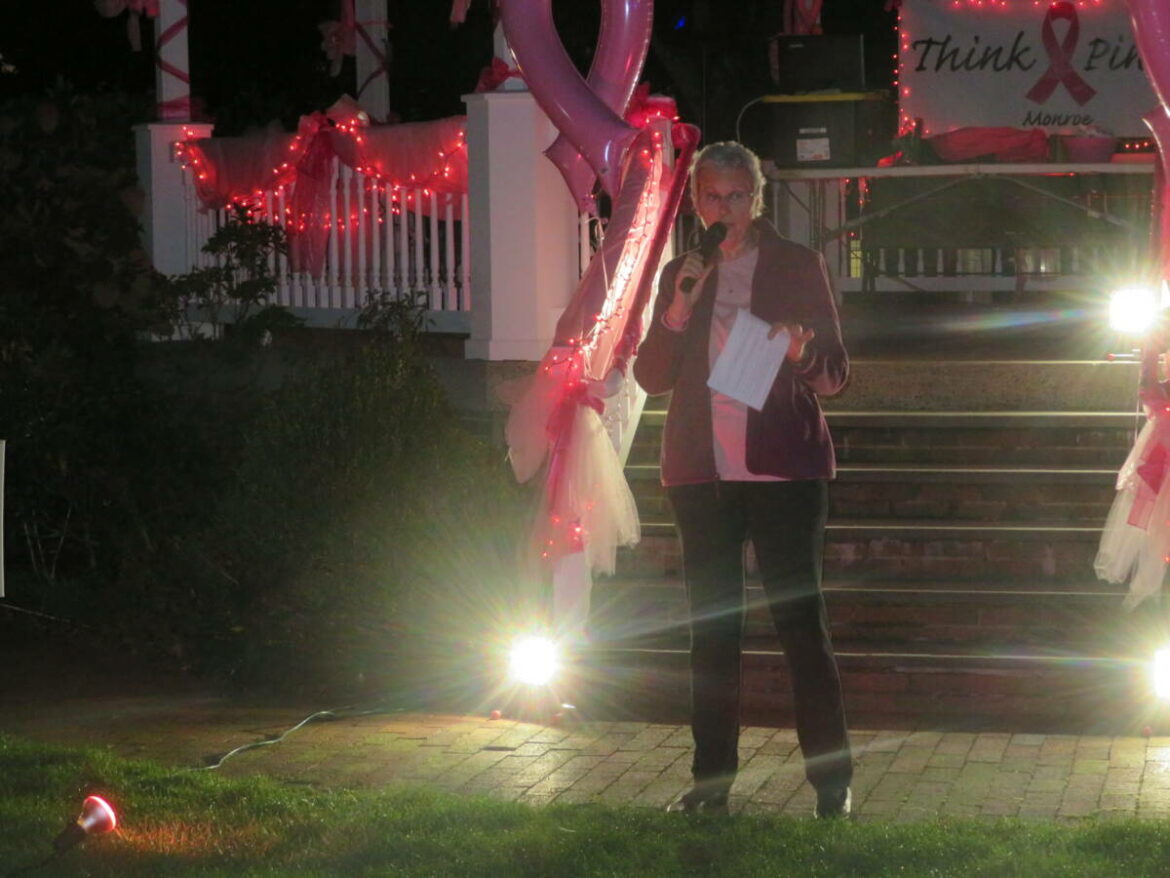 Dona Lyn-Wales shares the story of her breast cancer journey during the Think Pink Palooza on the town green Thursday night.

MONROE, CT — Dona Lyn-Wales faithfully went for her annual mammogram, testing negative every time until last year, when she was diagnosed with stage 1 breast cancer.

A few years ago, Robert Primorac was showering, when he felt something in his chest. “I thought, ‘well, guys don’t get breast cancer,'” Primorac recalled.

His doctor suggested he get a mammogram and Primorac tested positive for stage 2 breast cancer.

Lyn-Wales successfully completed her rounds of chemotherapy and radiation treatments and Primorac is now a four-year breast cancer survivor. 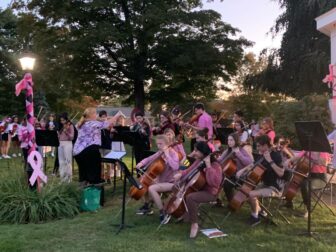 The Masuk Orchestra performs at the Think Pink Palooza Thursday.

During the Think Pink Palooza at the town gazebo Thursday night, both speakers stressed that breakthroughs in research and improved treatments can be greatly diminished without early detection.

Lyn-Wales expressed her gratitude for the support of family and friends and for organizations like Think Pink Monroe, which provides financial assistance and rides to treatments for Monroe cancer patients.

“I have to be aware of my health and do what the doctors say,” she said, adding that Think Pink Monroe promotes awareness of annual screenings, including mammograms and prostate exams.

“I had early stage breast cancer,” Lyn-Wales said. “If I didn’t go for annual mammograms, I know it would be a worse stage and I’m confident my breast cancer journey would have had a different outcome.” 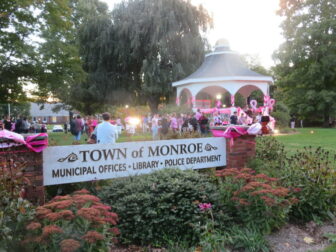 One in eight women will be diagnosed with breast cancer in their lifetime and the lifetime risk for men is one in 833, according to Cancer.org.

“I feel I survived this so I can be an advocate and talk at things like this, so you realize men can be diagnosed too,” Primorac said.

Matthew Hirsch, vice chairman of  Think Pink Monroe’s Planning Board, lost his mother to breast cancer when he was in high school. 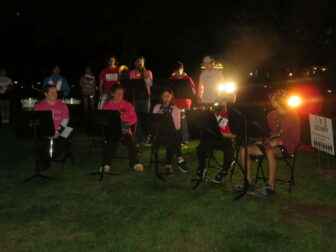 The Masuk Band performs at the Think Pink Palooza Thursday.

Hirsch noted how the month of October is filled with reminders to get cancer screenings as part of preventative care with billboards and events like the Think Pink Palooza. Then he spoke directly to the young people in attendance Thursday.

“There is nothing more personal, powerful or effective than when that reminder comes from your kid. ‘Mom, did you get your mammogram? If not for you, do it for me,'” Hirsch said, “and nag and nag and nag. And tell your dad to self check. It can happen to guys too.” 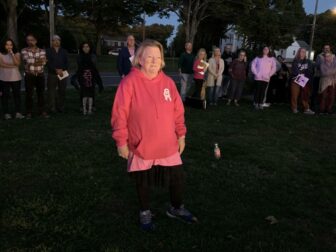 Think Pink Monroe, which recently achieved nonprofit status, was founded by Bonnie Maur of Monroe, a longtime educator who is now a breast cancer survivor of 17 years.

Her son, Town Councilman Jason Maur, recalled how his mother used to participate in the Avon Walk for Breast Cancer every October, when “a sea of pink” crossed the Brooklyn Bridge.

When they stopped holding the event, Jason said his mother started Think Pink Monroe to bring something to her own community.

Bonnie credits Patti Kallas, secretary of Think Pink Monroe, for getting her involved locally when she encouraged her to chair The Relay for Life.

“I am so in awe by the fact that so many of you are out here tonight,” Bonnie said. 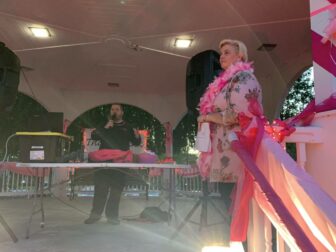 She thanked First Selectman Ken Kellogg and Superintendent of Schools Joseph Kobza for the town and school system’s support of Think Pink Monroe’s mission of raising awareness and funding for Monroe families affected by cancer.

Aside from the love and support of her family and friends, Bonnie recalled how residents left meals at her doorstep every day during her cancer treatments and paid for someone to clean her house.

“I’m originally from New York City,” she said. “I moved here 40 years ago and I’m proud to say that this is my community.” 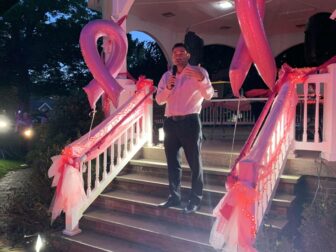 Scott said his mother and grandmother are both breast cancer survivors. He thanked Bonnie Maur and the community for coming to the event.

Kellogg shared statistics, including the fact that the female breast cancer death rate dropped by 42 percent since its peak of 1989, and that 98 percent of those who detect their cancer early will be survivors.

The first selectman asked people to remind their loved ones to have routine cancer screenings.

Kobza shared how Monroe’s public schools are raising awareness and funding this month. 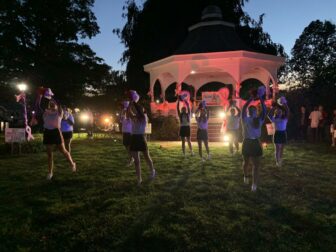 The elementary schools all had a Pink Palooza, collecting donations for Think Pink Monroe.

Jockey Hollow Middle School will have its annual Pink Out in mid-October when the Student Activists Club sells bracelets during lunch waves. Students and staff will be encouraged to wear the bracelets and pink to raise awareness on Oct. 25 for Spirit Week.

The Masuk field hockey team had its Stick it to Cancer game last Friday, raising money for Dawn Davis and her family as they battle the disease.

On Oct. 11, the volleyball team will have Dig Pink night, selling T-shirts and donating the funds.

Both the boys and girls soccer teams will have Kick Pink games, on Oct. 11 and 13. 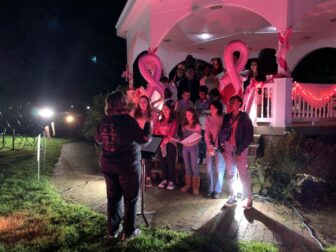 The Masuk Chorus performs at the Think Pink Palooza Thursday.

On Oct. 10-14, Masuk cheer, dance and football players will sell bracelets and Think Pink T-shirts to wear at Friday’s Pink Out football game.

The football team has been raising money for Mike Brigante, whose two sons played for Masuk. Brigante is battling pancreatic cancer.

“We know that cancer affects all of us and I’m proud that the Monroe Public Schools community will continue to actively participate in all of these activities again this year,” Kobza said.