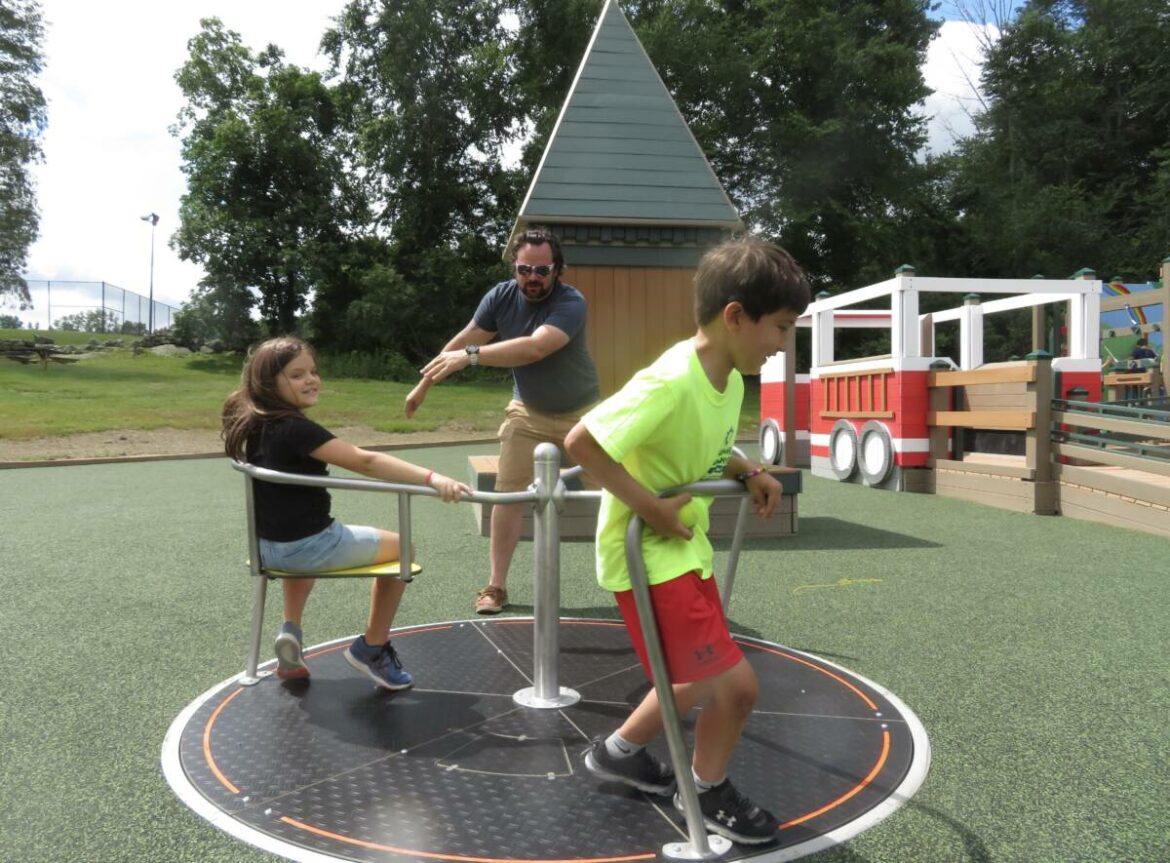 Steve Winkel, who volunteered for the community build of The Wolfe's Den playground at Wolfe Park, pushes a merry-go-round for his daughter, Sophie, 6, and a boy she is playing with Friday morning.

MONROE, CT — Steve Winkel pushed the merry-go-round, spinning his giggling six-year-old daughter Sophie and a boy she was playing with at The Wolfe’s Den Playground at Wolfe Park Friday morning.

Soon after Parks and Recreation Director Missy Orosz opened the new playground for the first time at 8:40 a.m., children ran, climbed and swung all over it.

Winkel said he moved to Monroe seven years ago, when the wooden Kids’ Kreations Playground stood in The Wolfe Den’s place. 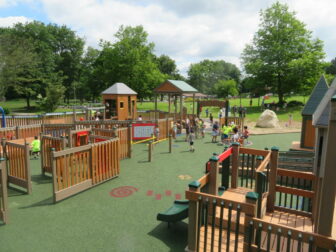 “That was a community center, even though it had splinters,” he said of the old playground, “and to see this and be part of the build and see both kids wide-eyed over it …”

Winkel, who also has a son named Connor, 4, reflected on how The Wolfe’s Den will serve generations of children.

“It’s awesome to be able to share it with the kids and be part of the community, but there’s a small bit of excitement to see kids play in part of the playground I worked on,” Winkel said.

Earlier in the day he saw Sophie go down a slide he had installed with fellow volunteer, Adam Pryor. 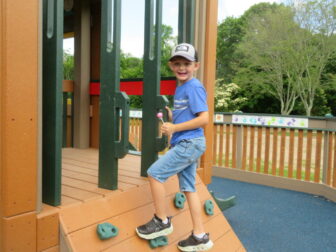 Donna Feldsher, of Trumbull, relaxed on a bench with her granddaughter, Charlotte, 2, who ate a snack. “I read in the paper that it was open,” Feldsher said. “It’s nice. She really likes it.”

Edyta Herman watched her sons, Nicolas, 4, and Dominic, 6, climb in one area of the playground.

“It’s great. The kids really enjoy it,” Herman said, adding she expects to bring her boys there often. “This is a great place to spend the summer.” 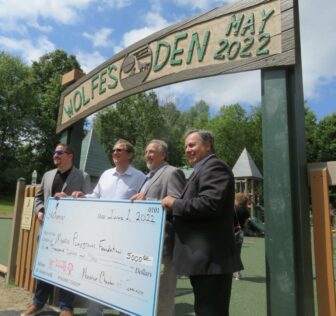 The Monroe Playground Foundation spearheaded the project to replace the Kids Kreations Playground.

The money for Friday’s donation was raised from the Monroe Chamber of Commerce’s Annual Golf Tournament. Jim Weinberg, who is managing director of Clarksons Platou, the title sponsor, also attended the ceremony.

“It is a great pleasure for us in the Clarkson’s Connecticut office to participate in the Monroe Chamber Annual Golf Outing as title sponsor,” Weinberg said. “This event was both a chance to bring together the local shipping community that we work with on a daily basis and to support local causes such as the playground and the Chamber’s scholarship program with Masuk High School.” 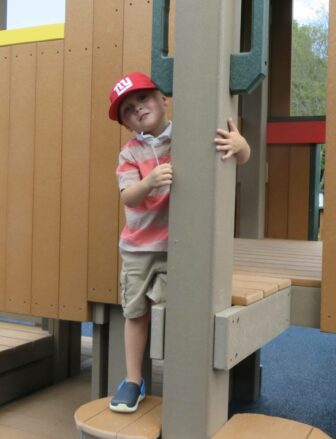 “The outing was very successful because of the volunteer spirit of the Monroe Chamber and the giving spirit of the many businesses in Monroe who contributed to the event,” he said.

“In addition, our clients and associates rose to the occasion and contributed liberally to the cause as well as enjoying a great day of fun and camaraderie on the golf course,” Weinberg said. “We are honored and proud of our association and participation with the Monroe Chamber of Commerce and the success of this charitable event.”

“We’re incredibly honored by everyone who supports the playground and honored the Chamber decided to support our project,” Keene said. “The Chamber is an iconic organization known around Monroe, and the playground is a new icon. I’m pleased that these two icons can come together in a partnership.”

“It’s wonderful seeing the kids have a great day,” he said. “Everybody’s having fun. It’s a safe environment.” 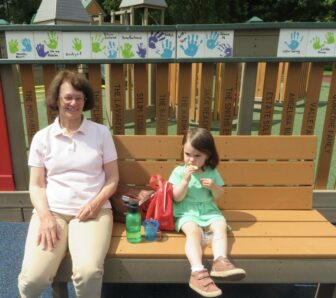 Donna Feldsher, of Trumbull, sits on a bench at The Wolfe’s Den playground at Wolfe Park with her granddaughter, Charlotte, 2, Friday morning.

Of the Chamber choosing to donate to the playground, Giovanni said, ” it’s such an integral part of our community. We wanted to see them be successful, because when you have a great living experience from the residents’ perspective, it supports the business environment within our town.”

“It’s awesome,” Keene said of the playground opening. “It’s a dream come true. This is literally five years in the making. I was 100 percent sure we would meet our goals and am still shocked that we’re here.”

Ganino said, “it’s an amazing feeling to see the playground come to life with all the kids after we worked so hard all these years and the community came together to have it.”