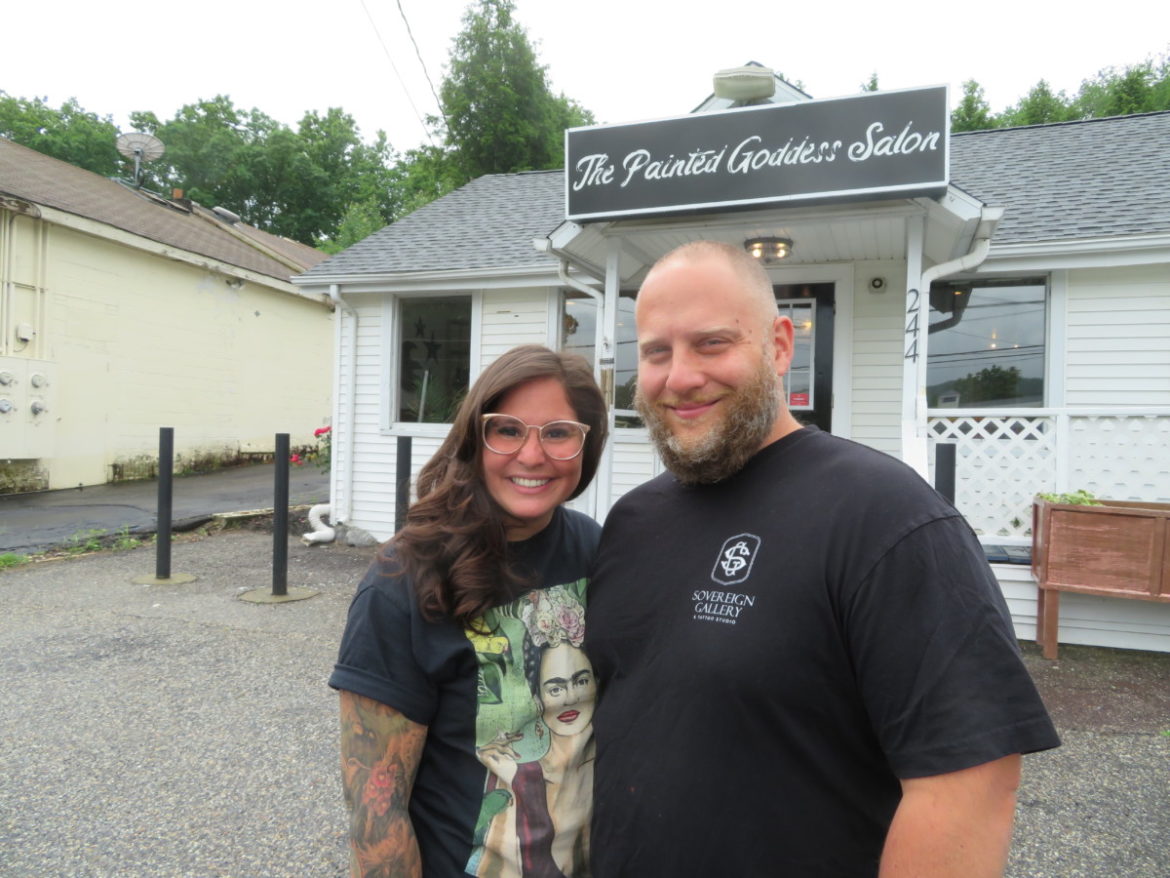 Amanda Roos, left, with her husband, Dale. She recently opened The Painted Goddess on Route 34.

MONROE, CT — Clients of The Painted Goddess Salon are immediately ensured steps are being taken to prevent the spread of the coronavirus. A sign on the door asks them to call to notify the beauticians of their arrival and reminds them to wear a mask.

Once inside the building at 244 Roosevelt Drive (Route 34), owner Amanda Roos takes client’s temperatures and texts a link to their cellphone of an online form, which contains health questions and must be completed and signed.

Then visitors sign a printed form and are offered hand sanitzer.

“This is contact tracing,” Dale Roos, Amanda’s husband, said of the form. “We chose to do it on our own.”

“We’re trying to go above and beyond with the requirements,” Amanda said. “We have air purifiers and we just changed all the filters in the building.” 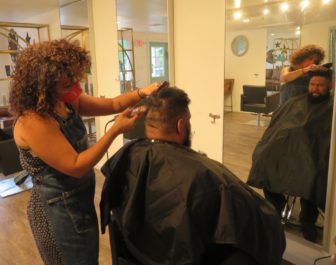 Heba Grecco, a stylist at The Painted Goddess Salon, a new business on Route 34 in Monroe, gives Amin Perdomo, of the Bronx, a haircut Thursday morning.

A few feet away, Amin Perdomo, of the Bronx, sat in a chair in front of a mirror as stylist, Heba Grecco, wearing a red mask, used a razor on the back of his head.

Since starting The Painted Goddess four years ago, Amanda used to visit clients’ homes and welcomed them into her Milford home for appointments. She and Dale found her first commercial location on Route 34 in Monroe this year.

“We were set to open on March 21, but were ordered to close on the 20th,” Amanda said of the governor’s executive order closing nonessential businesses after the Covid-19 pandemic broke out. “We take public safety very seriously, so we understood why it was done.”

The salon was allowed to open on June 1.

A friend in Massachusetts

Amanda and Dale Roos took a financial hit from the delayed opening. The couple has been married for eight years and has five children: Elizabeth, 15, Emily, 12, Sam, 10, Dan, 6, and Violet, 3.

Amanda said she is grateful to their landlord, who allowed them to remain in their home in Milford rent free until June 1.

Aside from the delayed opening, new expenses were needed for The Painted Goddess to be equipped for the pandemic.

“We had to go through distributers for personal protective equipment,” Amanda said. “Masks and hand sanitizer were hard to find.”

She remembers expressing her frustration in a Facebook video, when a woman in Massachusetts saw it and was moved to help. Jeanne Dabrowski donated masks and hepa filters that are biodegradable.

“Good people exist,” Amanda said. “She and her husband have done this out of the goodness of their hearts.”

Amanda said, by a fluke, the Dabroskwis received four 3D-printers one Christmas. Now the couple is using the machines to crank out masks and shields for hospitals.

Amanda started a Facebook group with other beauticians. The page has 700 members and she uses it to distribute the PPE to her fellow hairdressers.

Amanda, who grew up in Stamford and graduated from West Hills High School, knew she wanted to be a beautician at a young age.

“I used to cut my dolls’ hair and cry, because it wouldn’t grown back,” she recalled with a chuckle. “My Aunt Carmen was a hairdresser. She was my role model. She was my inspiration. She was everything fabulous and beautiful.”

Carmen Cobos ran several high end companies and salons, according to Amanda, who added she hopes her aunt will join her at The Painted Goddess one day.

To pursue her passion, Amanda went to the Brio Academy of Cosmetology, a beauty school that used to be in Fairfield. She has been licensed for 13 years.

Amanda’s career began at Magnolia Salon in Byram, Conn. She said it was ranked among the top 100 salons in the nation.

Then she worked at Hopscotch Salon in Old Greenwich.

“It’s an education based company,” Amanda said. “I think that’s what gave me this basis in education.”

She teaches aspiring hairdressers at the SoNo Academy.

“I teach color theory. That is my niche, but I love it all,” Amanda said. “I love the science. I’m a chemist first. Anyone who knows me, knows I’m a nerd for the science of everything.”

The Painted Goddess Salon plans to pursue grants for community outreach, such as allowing young people from the inner city to shadow their hairdressers to learn the basics, while helping those who want to pursue it further.

The Painted Goddess is born

Before starting her own business, she worked at Z-Hair Studio in Milford.

Amanda was in her comfort zone, but her husband encouraged her to take the plunge. “He said, ‘you can do this,'” she recalled. “He’s my biggest supporter in all things.”

Years ago, a client told Amanda she left her salon feeling like a painted goddess and told her she should use that name. “That’s all we want to do, make people beautiful,” Amanda said.

The Painted Goddess started with 12 clients and Amanda now has a rotation of over 120, including a woman who had flown her to Florida for a haircut while she was traveling, because Amanda is the only one she trusts.

“I’m just really proud of her,” Dale said. “She put in a lot of work, time and effort — and I know she’s going to do great here. I’m very proud of her.”

Amanda said the most important thing to her is the relationships with her clients, built on trust to the point where they know The Painted Goddess’s beauticians “will never steer them wrong.” It’s about seeing the beauty that is there and giving their confidence a lift.

“You know the saying, ‘when someone sits in the chair and leaves as a different person?'” Amanda asked. “As long as you do everything with love, people feel it absolutely. You do it with passion or not at all.”