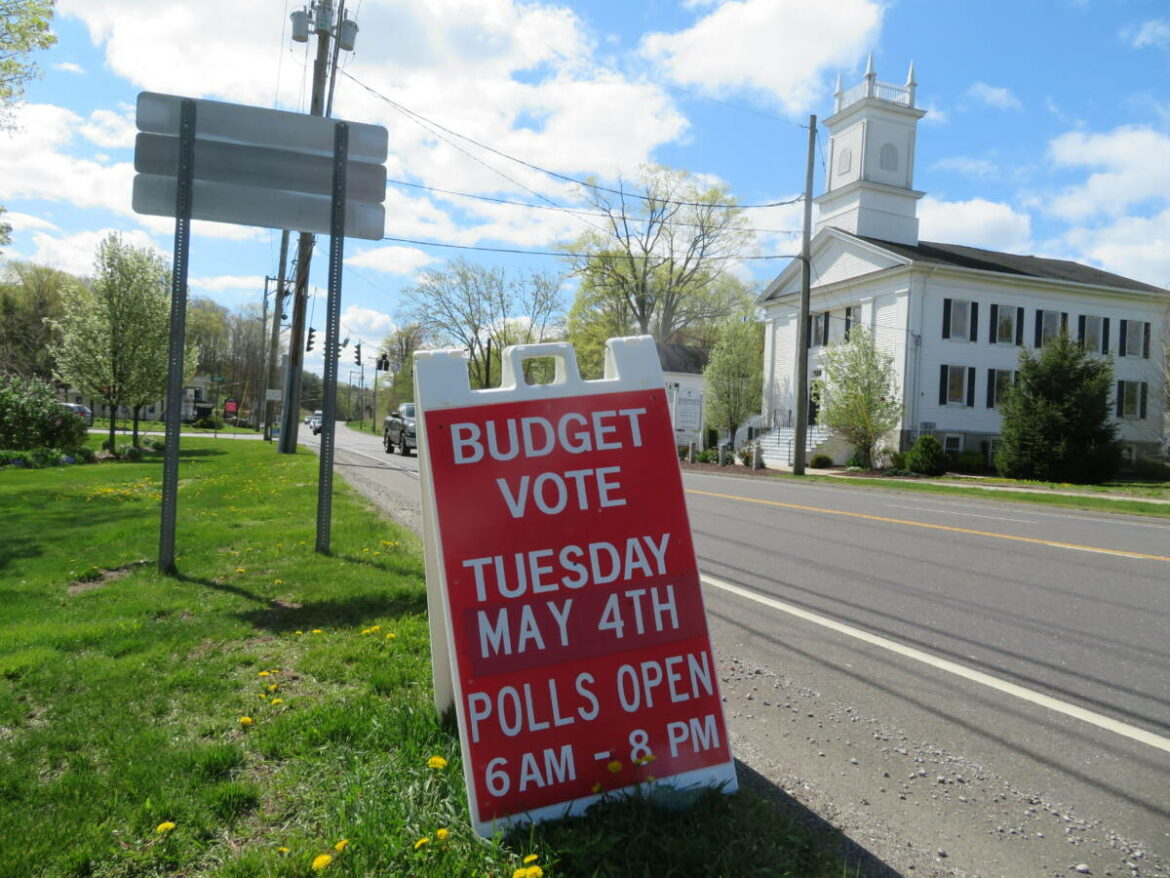 MONROE, CT — Taxpayers will decide on a $93 million town budget proposal with a 2.48 percent increase to the tax rate when they go to the polls during this Tuesday’s referendum, one year after the governor’s executive order at the height of the COVID-19 pandemic had taken away that right.

“Last year, the Board of Finance was put in the very difficult position of having to approve a budget without voter approval,” Chairman Michael Manjos recalled. “It was extremely difficult for myself and the board as we are all advocates of the budget referendum and I am happy to be able to send this year’s budget to the first selectman and for approval of the voters. I encourage everyone to exercise their right and vote on Tuesday.”

The projected mill rate is 36.36. Individual tax bills can be calculated by multiplying one’s assessed property value by the mill rate and then dividing by 1,000.

First Selectman Ken Kellogg said the median assessed value of a Monroe home is roughly $234,000, which translates to a $206 increase.

Kellogg and the Board of Finance did not want to increase the pain for residents by raising taxes last year, during a period of economic uncertainty, when many people were losing their jobs.

Town and education employees agreed to forgo raises for one year and the Board of Finance used a large portion of the undesignated fund balance to cut the mill rate by 0.28 percent.

But that cannot happen again this year. Those were one time fixes and now the contractual obligations are due.

“The costs of important things like healthcare insurance, the state’s pension program for our police officers and recycling continue to rise,” Kellogg said. “I am grateful that our unions agreed to my request for economic concessions last year, allowing us to keep overall salary and wage costs flat, despite contracts that said otherwise.”

“After essentially skipping a year in those agreements, these employees — the vast majority of whom continued to work every day during the pandemic —are now due a small but reasonable increase next year,” he continued.

If not for the “growth in the grand list, a conservative and disciplined approach to spending, and use of alternative funding, taxes would grow at an alarming rate of over 9 percent,” according to Kellogg.

“The budget now results in a projected tax rate increase of 2.48 percent,” he said. “This is an average of less-than-half-a-percent per year over the past four years.”

Though the tax increase is higher than past years, Manjos said it represents a reasonable approach to a challenging financial situation.

“We are still proposing using fund balance to offset some of the increase in spending, but less that half of the amount budgeted last year,” he said. “By gradually lowering the use of fund balance it will allow us to work through this challenging year and get to a normalized budget approach in the next one-two years. Based on our best estimates, we will still stay within our fund balance policy and are able to fully fund both education and town services while keeping a tax increase at a manageable level.”

The American Rescue Plan is expected to bring in up to $6 million in federal aid to the town. Though it cannot be used to cut taxes, the first selectman is hopeful  the U.S. Treasury will allow a replenishing of the fund balance to be one of the options the funds can be used for.

Overall municipal costs would rise by 2.36 percent in the 2021-22 budget proposal and education spending would increase by 5.16 percent, providing around $3 million more in a total $61,521,068 budget for Monroe’s public schools.

Manjos said the Board of Finance kept the Board of Education’s budget proposal fully funded this year — and it can remain intact if voters pass the budget on Tuesday.

“If this budget fails at referendum, I expect the vast majority of cuts would have to come from the education side of the budget, since that represents the majority of the spending increase,” Manjos said.

Superintendent of Schools Joseph Kobza said one of the drivers of the district’s increase is rising student enrollment.

“For nearly a decade, the Monroe public schools prudently reduced staff as the number of students in the system decreased,” he said. “However, we have seen significant growth in the past two years. This is a testament to the standard of education that the district provides to its students. Throughout the pandemic, families have overwhelmingly chosen to move to Monroe for its great school system.”

But Kobza said this has created pressure, because the district now has as many students as it did five or six years ago with 12 to 18 less certified staff members. He said enrollment is still going up and educators are still trying to figure out how many more students are coming next fall.

“This budget restores some — not all — of the positions that were lost last year and begins to address class sizes at all levels,” Kobza said. “Through our collaborative efforts with the community, it provides the resources needed to maintain the excellence in education that we expect in Monroe.”

As a result of adjustments made during last year’s budget process, Kobza said the district lost nine certified positions and a number of non-certified positions, as well as funding for professional development and other services.

To avoid further layoffs last year, Kobza said all Board of Education employees agreed to concessions, primarily in the form of furlough days. He said the district knew that would bring challenges this year with the negotiated increases now due.

Board of Education Chairwoman Donna Lane expressed her support for the education budget that will go to referendum.

“The Monroe Board of Education asks for your support for the town budget at referendum next Tuesday, May 4th,” she said. “After reviewing every line item, the board submitted a budget that meets the needs of all students, while also meeting our contractual obligations. This budget allows us to maintain class sizes and programs vital for our students’ success. We encourage you to exercise your right and come out and vote on Tuesday.”

The first selectman stands by the work town and education officials did in putting together the town budget.

“In preparing the fiscal year ’21-22 budget, I remained committed to controlling taxes while improving roads and infrastructure, delivering cost-effective services to our community, providing excellence in education, and maintaining the financial health of the town,” Kellogg said.

“I am 100 percent in support of this budget as proposed, as it has been a work in progress for over a year,” Manjos said. “The challenges and uncertainty caused by COVID-19 has made this the never-ending budget season. We took many extraordinary steps over the past year to make sure the needs of the town were fulfilled as best possible and the burden to our taxpayers were kept to a minimum.”

“The Board of Finance unanimously supported this budget,” Manjos continued. “I have already voted in favor and I would respectfully ask for your support as well. The town of Monroe is in a strong financial position, we have a reasonable debt load, nearly fully funded our long-term obligations and continue to budget conservatively. This budget will allow us to maintain a strong balance sheet and still provide the services expected by the taxpayers we serve.”

The complete proposed budget document is available in the Town Clerk’s Office, the Library and online at www.MonroeCT.org/budget.