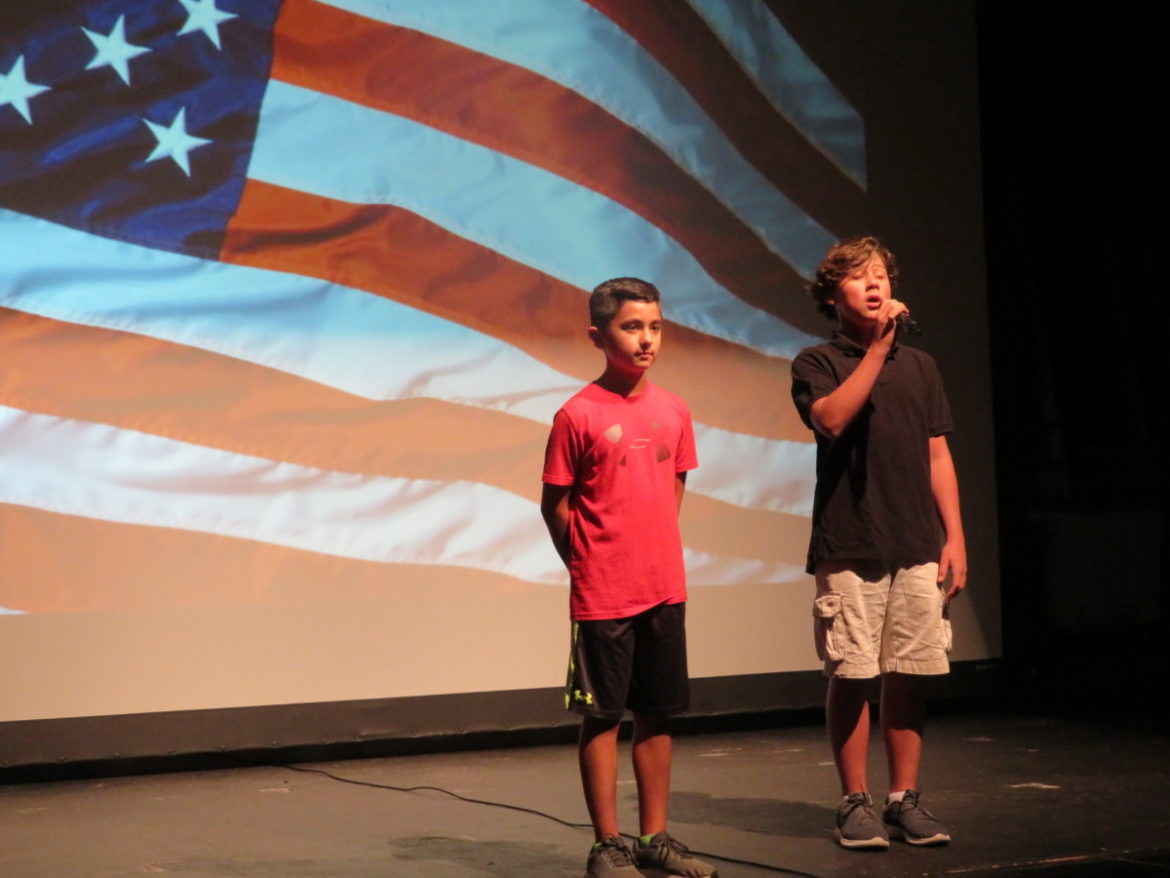 Trey Sbrega, left, a Monroe Elementary School fifth-grader, led the audience at the school district's Convocation in the "Pledge of Allegiance" Tuesday. Here he listens to Masuk junior Jake Minch's rendition of the National Anthem.

Teachers and administrators socialized over breakfast in the Masuk High School cafeteria, then fired each other up for the 2019-20 school year through a series of speakers at Convocation Tuesday morning.

The day included the passing of the torch from outgoing teacher of the year, Jill Silvestro to the reigning teacher Doug DelVecchio.

Silvestro introduced DelVecchio at the podium inside the Masuk auditorium. She said he was chosen from among 124 nominees and shared the adjectives students and parents used to describe DelVecchio in their letters.

DelVecchio, an eighth grade U.S. history teacher at Jockey Hollow Middle School, is known as an educator with an undeniable passion for his students, someone who is funny, nice and who makes history fun.

“To me, it was always about being there for my students,” DelVecchio said. “My dad always said, ‘a career is long. You should do something you like.’ I wanted to be a Major League Baseball player. I just couldn’t hit the ball far enough, but I love history and teaching young people.”

“We want to ignite passion in our students,” he added. “Passion is contagious.” DelVecchio said a teacher’s passion is almost like a delivery system for the class lessons.

DelVecchio was influenced by his mother, Carol, who taught for 34 years, and his late father Doug Sr., who was a history teacher at Chalk Hill and Jockey Hollow schools for 34 years. DelVecchio remembers family road trips when his father pointed out every historic landmark they came across.

DelVecchio said he is humbled at winning teacher of the year in a district with so many talented teachers, though he said it was the influence of many of his peers that made him the teacher he is today.

Picking the next teacher of the year may be more difficult this time around. DelVecchio shared a training video showing how he did it. It was a funny montage of him working out, while reading history books as the song “Gonna Fly Now” from the movie “Rocky” played.

His trainer was son, Jackson, 6. DelVecchio and his wife, Jacqueline, an eighth grade language teacher at Jockey Hollow, also have another son, Jace, 3, and a daughter, Ella, who is 20 months old. 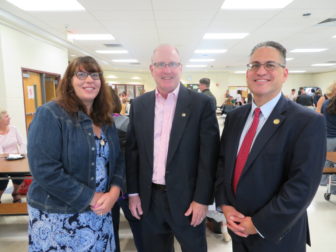 Board of Education Chairwoman Donna Lane recalled growing up in New York City, where families favored Catholic school over the “big, bad city school.” But she noticed how a nun taught a class of 40 students and if Lane didn’t get the lesson, she didn’t get it.

When Lane and her husband moved to Monroe, she said they chose to send their children to public schools over private, reasoning that they moved to town because of the positive reputation of the school system.

She said Monroe’s success involves intervention, individualized lesson plans, group conversations and dedicated teachers. “It does take a special person to do it 180 days a year,” Lane said.

First Selectman Ken Kellogg told the story of a middle school math teacher he had growing up, who did not understand nor care about his students. Kellogg said the teacher droned on and on and kept his back to the class, while jotting down equations on the chalk board. 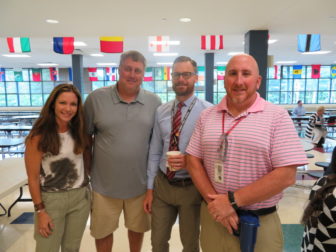 As a result of the teacher’s inattention, his classroom was out of control and students bullied each other.

Kellogg loved math before that class, but he had his lowest grade that year and it hurt his confidence, he recalled.

The next year, he was warned about another math teacher.

“She changed my life,” Kellogg recalled. “She was tough, but organized. She expected a lot from us and her persistence made me feel motivated.”

Kellogg said the teacher provided a safe environment and expressed confidence in her ability to teach and in her students’ ability to learn.

“You have the power to make a tremendous difference in your students’ lives — and it could go either way,” he said to the teachers seated in the auditorium. “You have an important role and each of you can change a life.”

‘We’re all a little nuts’

Jeff Seymour, the Monroe Education Association president, used humor in telling the story of how teachers obsessed over the summer about the delivery of a free purple AP Government binder with 100 pages to assist them in organizing their lesson plans this year.

“It’s just a binder with some very boring text,” Seymour said with a smile. “Some people got it right away, but soon demand outstripped supply.”

Seymour said teachers asked each other if they got their binder yet on social media every day and some showed insecurities, while wondering why they were left out.

Then AP Central told teachers they could read the material online and download it. “Not good enough,” Seymour said of teachers’ attitudes.

When binders began to arrive by mail, Seymour said teachers posted pictures of themselves with their purple binders “by the pool, on the beach” and “in the bathtub surrounded by candles,” increasing the angst of those who still did not get theirs.

“Teachers are as neurotic and confused as anyone else in society,” Seymour said. “We keep up the good face we need to be strong for our students.”

Seymour said teachers have to be thoughtful and compassionate for their students, despite what’s going on in their own lives.

“Never doubt yourself,” Seymour said to his peers. “You’re all outstanding professionals, even if we’re all a little nuts.”

Then Seymour posed at the podium with his purple binder, while Superintendent of Schools Jack Zamary took a picture of him. 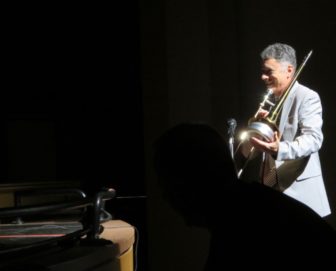 Superintendent of Schools Jack Zamary plays the trombone to mimic the sound of the teacher’s voice in the cartoon “Peanuts.”

Zamary showed a “Peanuts” cartoon clip of Charlie Brown in school and livened it up by playing a trombone for the teacher’s “wah, wah” voice.

The superintendent showed quotes from studies on how people have wandering minds. “Our students are dutiful,” he said. “They want to be in the moment, but we’re not wired to do that. It’s something to think about.”

Zamary showed a quote by University of Washington scientist, John Medina, that given a topic of moderate interest, people begin to tune out after approximately 10 minutes.

“We need to be concise,” Zamary said, adding teachers should try to limit talks to seven minutes, ask students questions and engage the senses. “Within this room, we have all the schools and tools we need.” 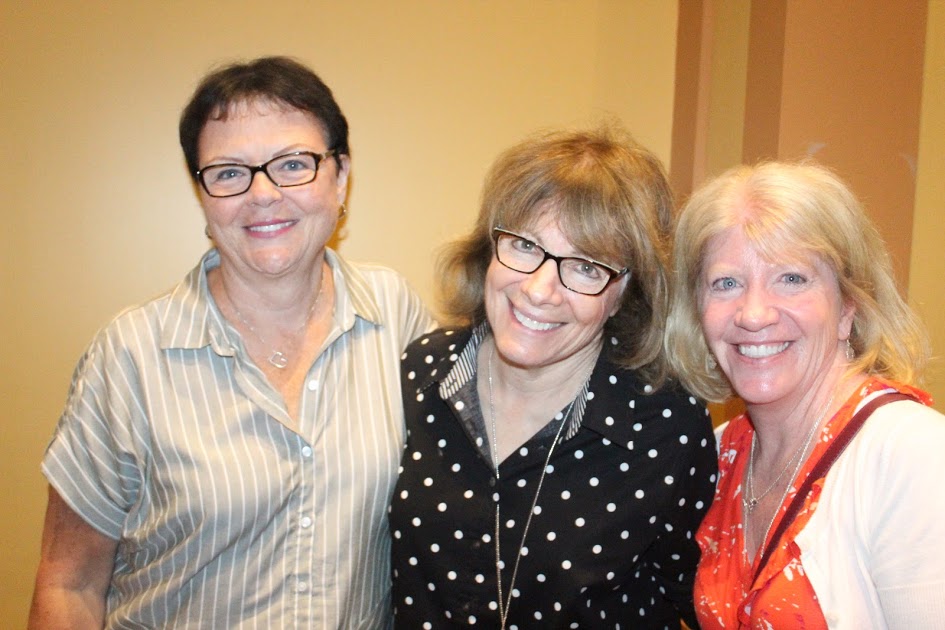 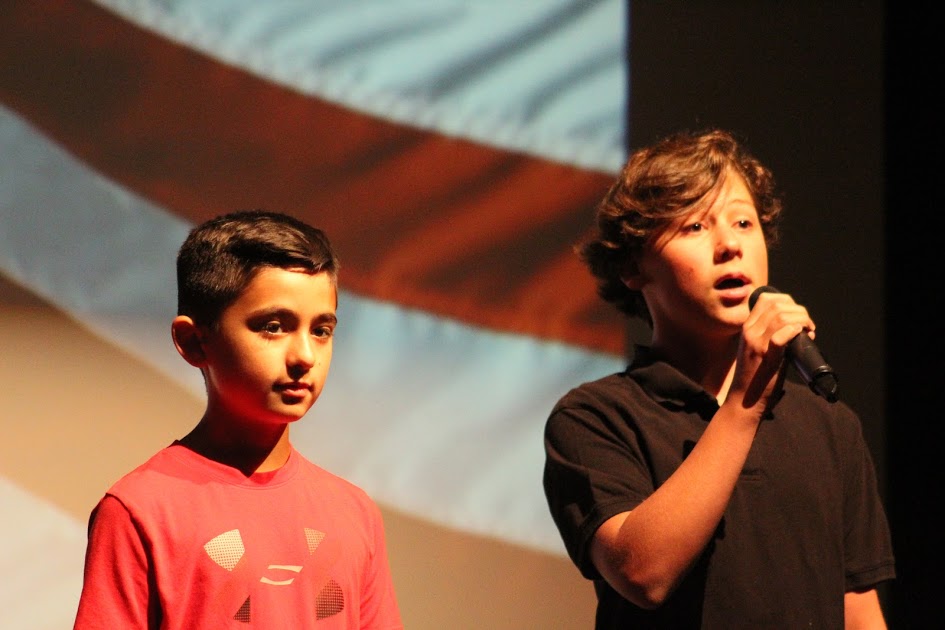 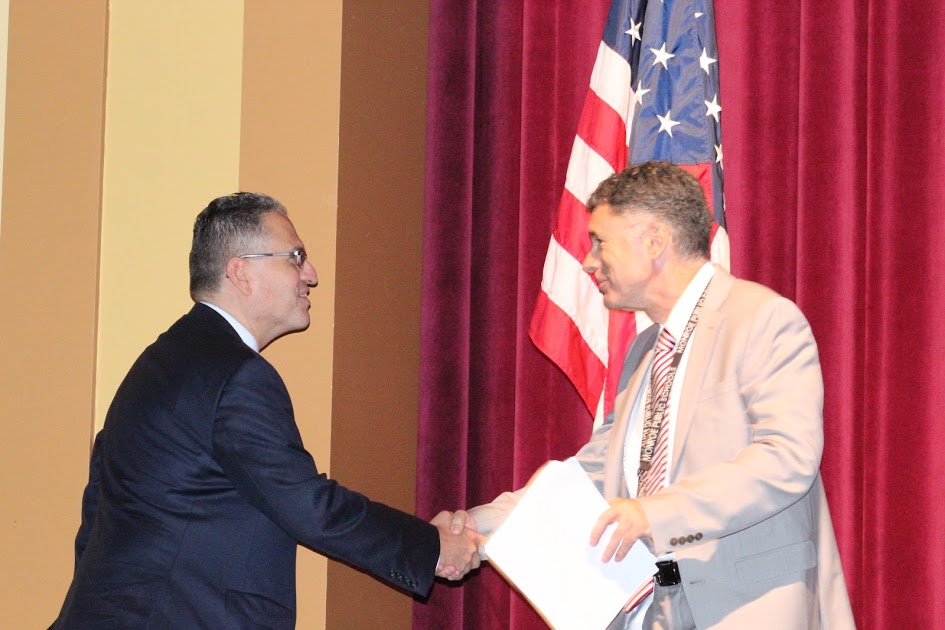 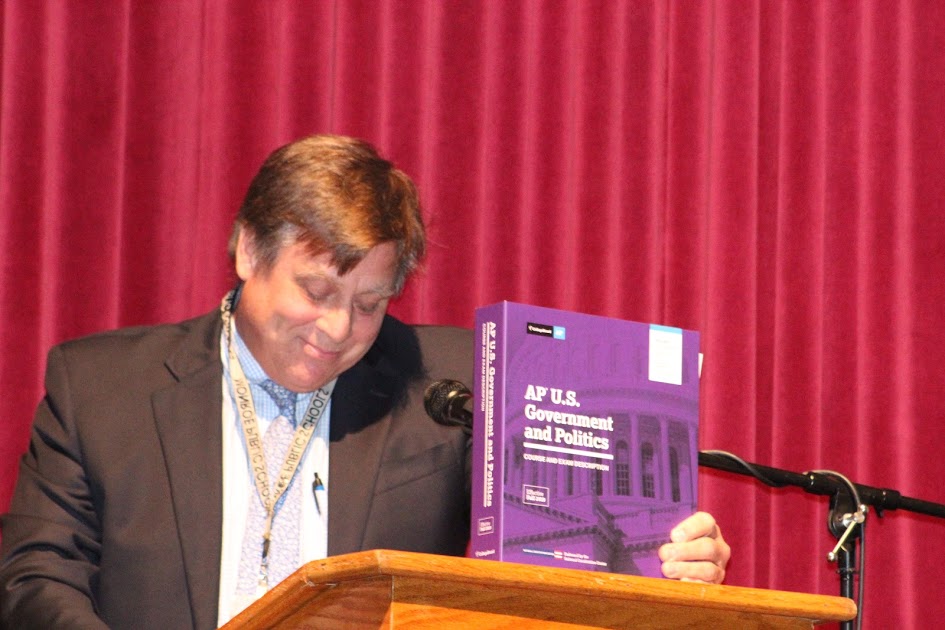 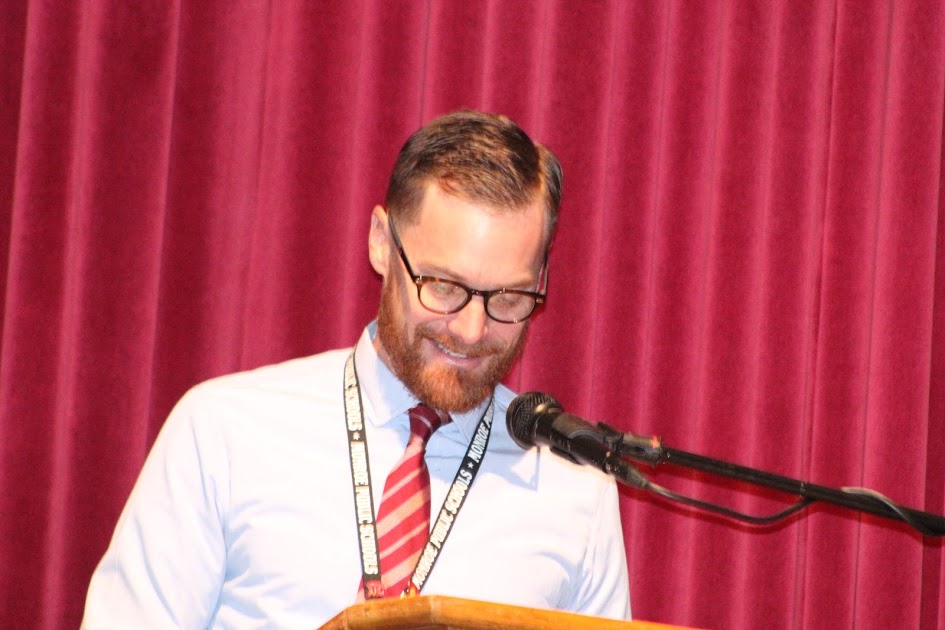 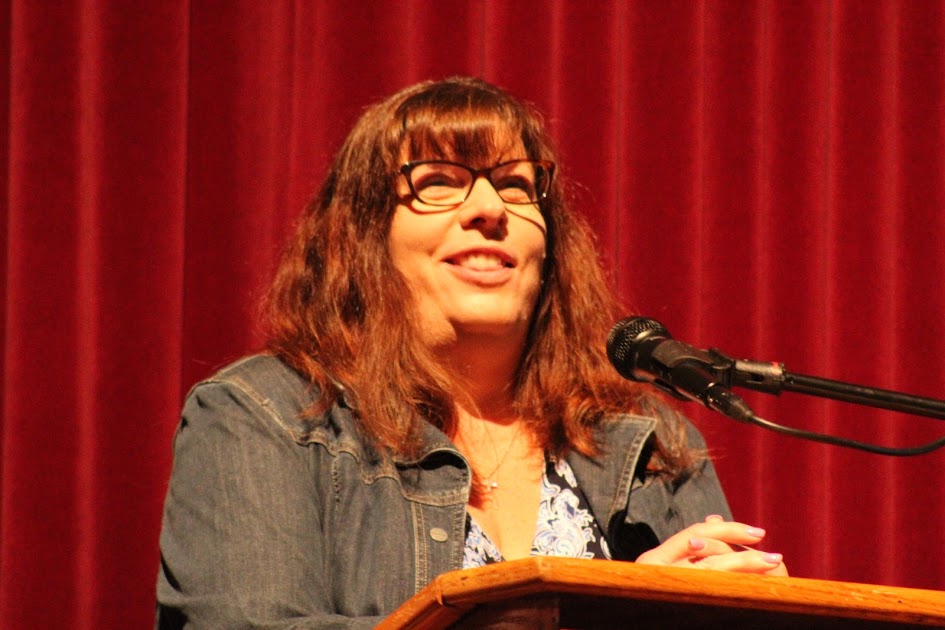 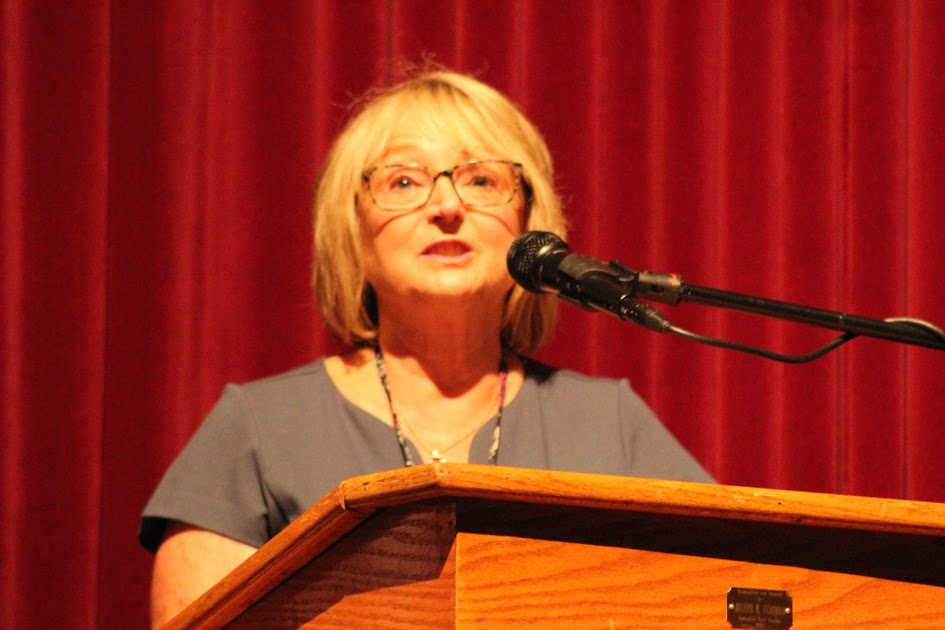 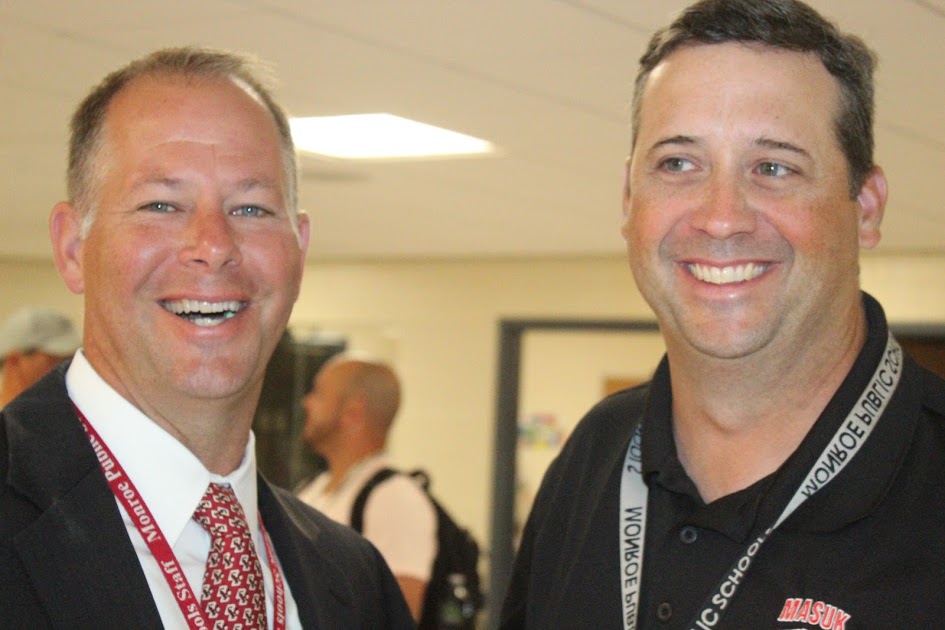 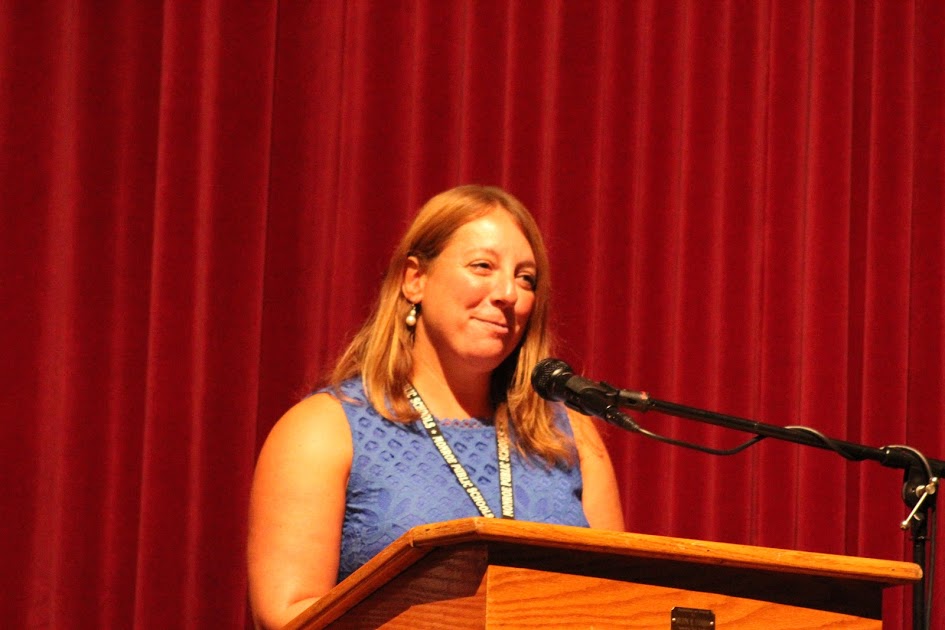 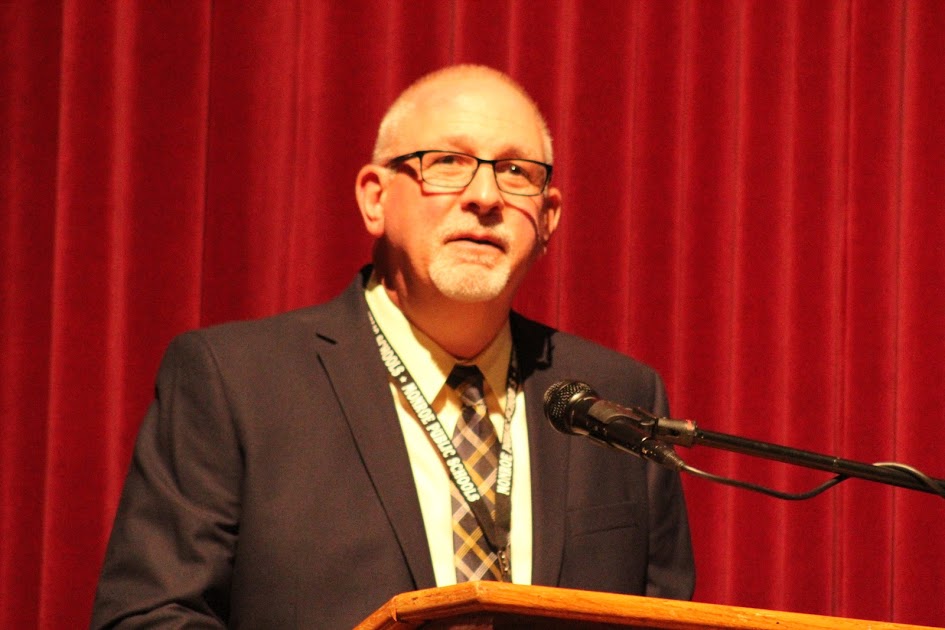 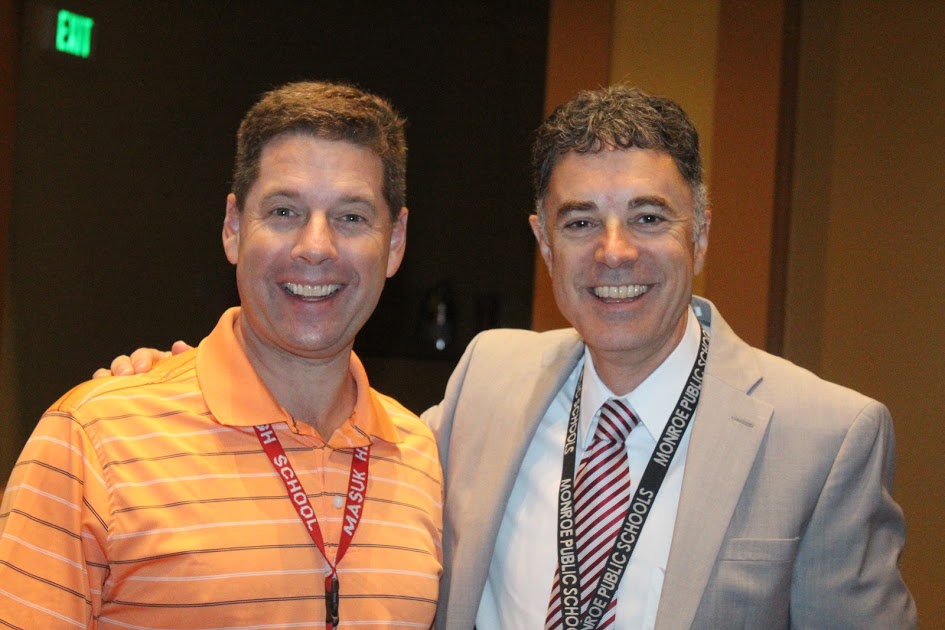 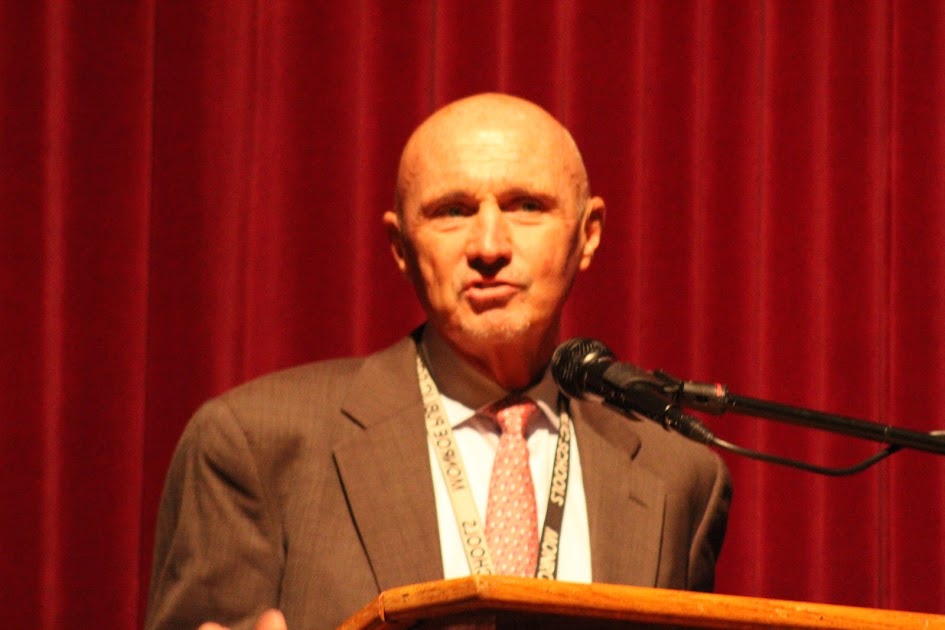 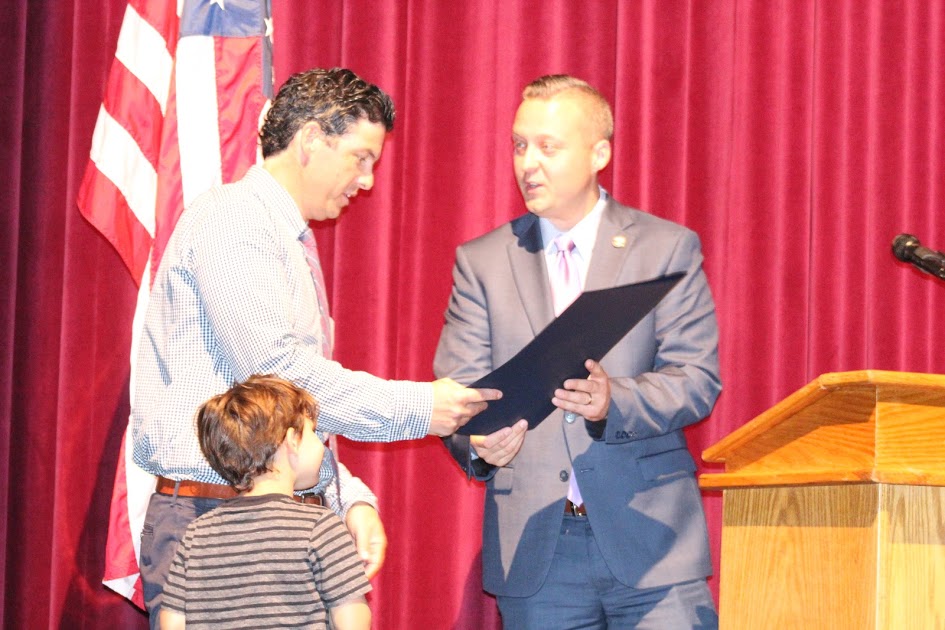 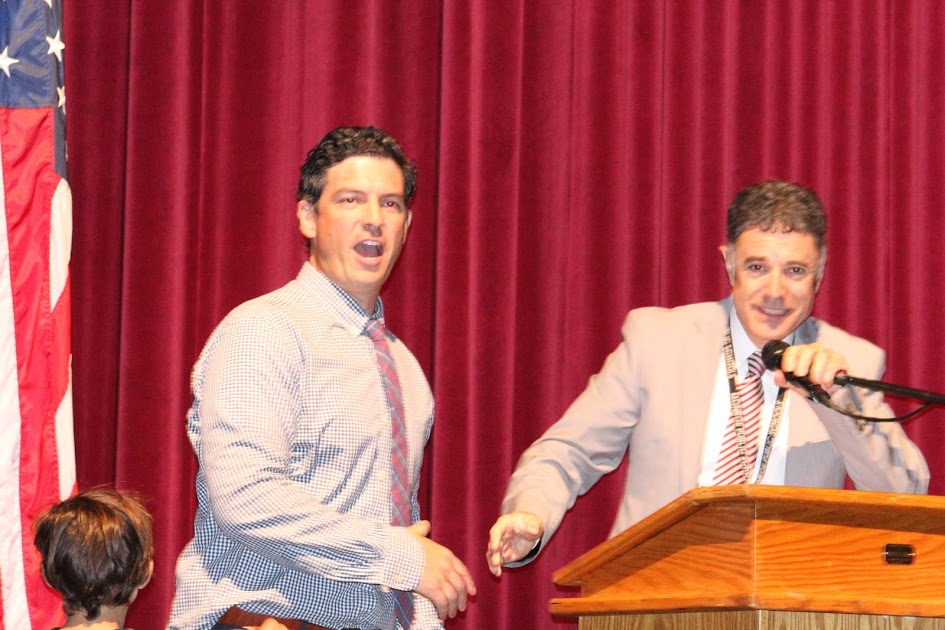 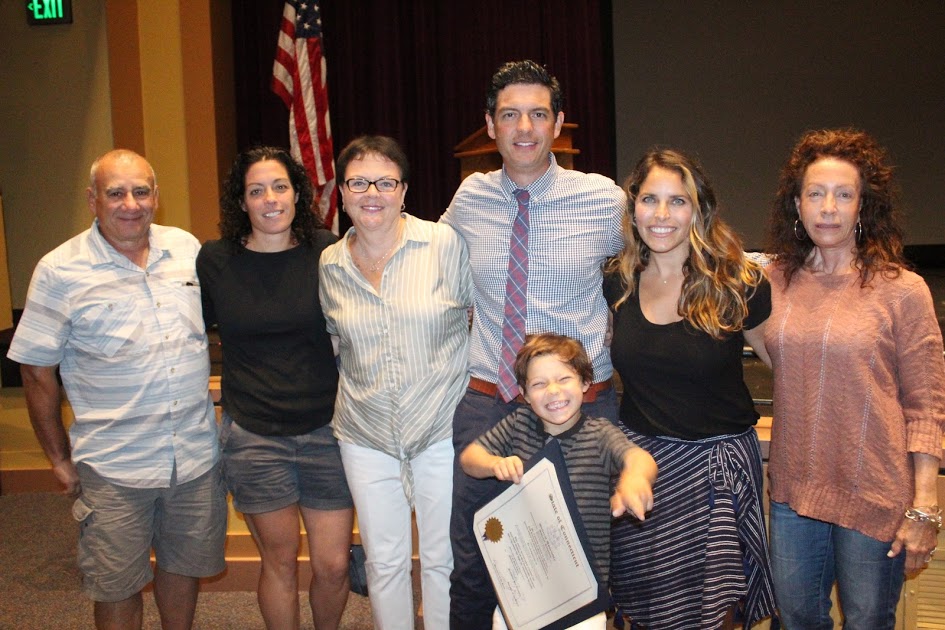 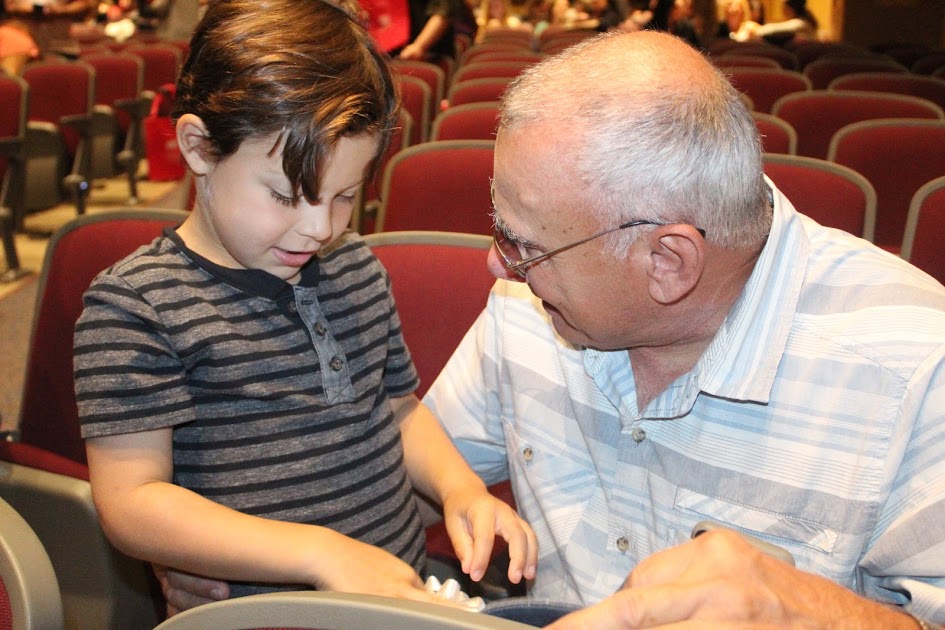