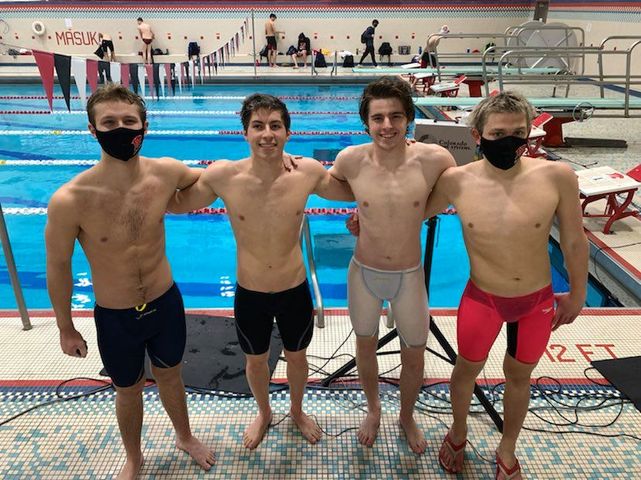 MONROE, CT — A steady rain came down Thursday afternoon, but Masuk High School seniors Matthew Hull, Mike Aiello, Ryan Cammarano and Joey Nizzardo did not cancel their interview. A little water never bothered the stars of the varsity boys swim team, who met a reporter under the cover of the pavilion roof at Wolfe Park.

The four forged a friendship years ago, while on the Rapids Swim Team together, before joining forces again at Masuk to break nearly every school swimming record.

“Before, people didn’t know about Masuk swim and dive,” Aiello said. “They were used to beating Monroe in the SWC.”

“I think we changed the culture,” Cammarano said of the competitiveness they brought.

In the last three seasons, the Masuk Panthers finished second in the SWC. They captured third place in the States in their sophomore year, before the COVID-19 pandemic led to cancelations of future competitions.

Along the way, Hull, Aiello, Cammarano and Nizzardo broke 10 of 11 swim records at Masuk.  “We basically rewrote the entire leader board,” Hull said with a smile.

The name of at least one of the four swimmers is on 10 of 13 records on the Masuk leader board, with the exception of the 100 yard backstroke (Connor Lui in 2010) and two diving records set by Kenny Pancoast in 2009 — neither senior dives.

“These are truly great young men and it was an absolute pleasure to coach them this year,” said Masuk Coach Mark McKee. 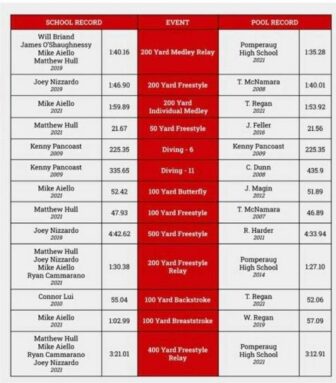 The Masuk leader board displays the school’s swimming and diving records.

Aiello and Hull also set the 200 yard medley relay record with teammates Will Briand and James O’Shaughnessy (1:40:16 in 2019).

Aiello said swimmers are always trying to beat the clock. It is not just a matter of where they finish, but what their time is, according to Cammarano.

“Sometimes we get first place, but my time could be better,” Aiello said.

Masuk’s top four swimmers compete with themselves as much as the swimmers from other schools. Several times, they’ve beaten their own personal records over the years.

“You focus on things with your technique and the times to improve,” Hull said.

Cammarano said Coach McKee was always suggesting techniques to give them an edge. “I liked swimming for him,” he said. “He swam in the past, so he knows what we’re going through.”

“He went to Southern and knows his stuff,” Aiello added.

“At Masuk, the most important thing was the community,” Hull said. “It’s an awesome sport, but the people around you create the vibe. They make you want to swim more. It’s an individual sport, but also a team sport. Being part of the team makes you want to do better.”

Though the Panthers work hard, Aiello said Masuk swim and dive members still enjoy a fun atmosphere. “I feel like a team sport, especially varsity, is very competitive,” he said. “Ours is welcoming. It’s a very chill environment.”

When Hull, Aiello, Cammarano and Nizzardo joined the team as freshmen four years ago, there were about 17 members. By their senior season the roster had grown to 25.

Nizzardo, who will attend Fairfield University next fall, plans to continue swimming in college. Aiello will compete at Southern Connecticut State University and Hull plans to swim competitively at Wheaton College in Massachusetts.

Cammarano, who will go to the University of Connecticut, will not swim. “They don’t have a competitive men’s team,” he said.

Though Masuk is losing its fantastic four, the seniors said they believe the Panthers will still have a competitive team next year.

“We definitely have people who are good swimmers,” Cammarano said.

Nizzardo said junior Kenneth Clark is already close to his records in the 200 and the 500 yard freestyle.

“My brother, Sean, already has times I had in the 100 yard breaststroke — and he’s a freshman this year,” Cammarano said.

“If he keeps swimming and keeps grinding, I think he can get the breaststroke record,” Aiello said. “He has a lot of potential.”