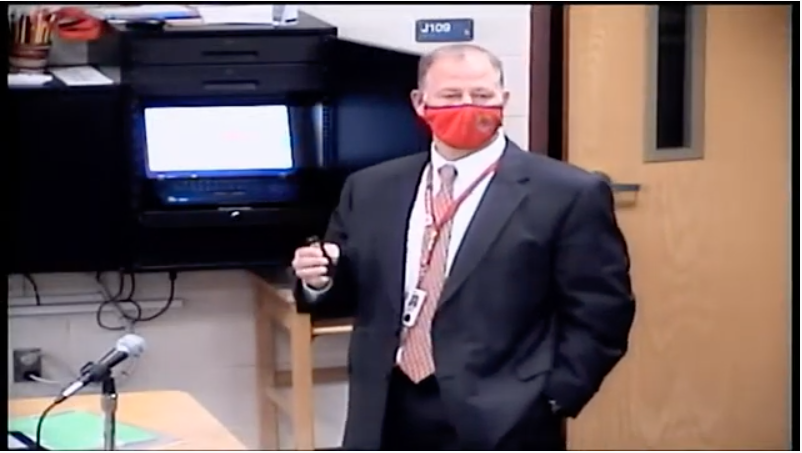 Superintendent of Schools Joseph Kobza presents his budget proposal during the Board of Education meeting at Masuk High School Monday night.

MONROE, CT — Furlough days, and other one-time concessions from teachers, administrators and staff, helped the town through a difficult budget year, but now the full payment for salaries and raises has come due.

Superintendent of Schools Joseph Kobza told the Board of Education these contractual obligations factored into his request for a $62.1 million budget for Monroe’s public schools in 2021-22, which carries a 6.19 percent spending increase.

“I don’t think any of us are, at least I’m not, completely surprised by the increase,” Kobza told board members at their meeting Monday. “It is definitely higher than it has been in recent history for sure.”

When the last budget year was marked by uncertainty due to the COVID-19 pandemic, Kobza said Monroe was one of the only districts, whose employees agreed to concessions. He said it enabled the district to avoid reducing five teaching positions.

But educators still had to make difficult cuts to other positions and programs and building maintenance and repairs were put off.

“We’re not asking to get all this stuff back, but we are starting to claw some of it back a little at a time,” Kobza said of his new budget proposal.

The superintendent also wants the district to tackle maintenance and repairs, so it does not have to pay for even costlier repairs and outright replacements of equipment in the future from being “pennywise and pound foolish.”

Kobza worked with principals and other administrators to create a budget that addresses class sizes, provides for a rigorous and relevant curriculum focusing on teaching and learning, and funds technology and professional development of teachers to enhance instruction for students.

Remote learning due to the COVID-19 pandemic made educators realize, more than ever before, the importance of technology and everyone’s reliance on it, Kobza said.

“We know that this world is changing,” he said. “We want our students to be able to meet the needs of this changing digital world.”

At the same time, Kobza said educators must strike a balance between high quality education and fiscal responsibility.

The Board of Education will have its first budget workshop Wednesday at 6:30 p.m., when board members review funding requests for Jockey Hollow/STEM Academy, Masuk High School and athletics. The public can watch it on YouTube by following this link.

Over half of the 6.19 percent budget increase, would be for salaries. With the restoration of furlough days in the new budget, the new teachers contract approved last year will be in full effect in 2021-22, according to Kobza. Salaries will increase by $1,871,558, accounting for 3.2 percent of the overall budget increase.

Benefits would rise by $837,282, accounting for 1.43 percent of the overall budget increase.

A $345,135 increase for special education marks a 9.5 percent increase and accounts for 0.59 percent of the overall budget increase.

The fourth key driver, according to Kobza, is a magnet school tuition settlement the district had with Bridgeport, costing $197,000, which accounts for 0.34 percent of the overall budget increase.

Kobza said his budget proposal is based upon several assumptions. Among them, is that enrollment and special education costs will be stable. It also assumes a 10 percent increase in health insurance costs.

“Hopefully that changes. I think we did get a little relief last year when we budgeted about the same number and saved about $150,000 when it came in a little bit lower,” he said. “I hope it does again this year. We’ll see.”

Other budget assumptions include better funding of repair and maintenance accounts, that people will be living in a COVID-free world by September, and there will be no revenue shortfalls.

This chart shows budget increases for Monroe’s public schools over the last decade, along with the student enrollment and staffing. Click to enlarge.

Then Kobza looked at enrollment. As of one week ago, Monroe public schools’ enrollment was 3,215 with 259.16 teaching positions.

The superintendent said the district has done a great job of decreasing the number of staff as student enrollment steadily declined over the years. However, he said enrollment is now going back up.

When budget proposals are cut, Kobza noted there is always a worry that programs and positions will never come back. He showed list of all the lost positions during the last budget process and a list of the programs.

One list included a special education position at Masuk, a world language position at Masuk, a k-5 math coordinator, a k-5 science coordinator, two teacher interventionists for the elementary schools, a library media specialist at Stepney Elementary School, a sixth-grade teacher, an instructional leader for world language, a custodian/security position, a secretary, para-educators, a mail courier and interns.

“We’re starting to claw some of this stuff back. Some of it we don’t think we need,” Kobza said. “John DeGennaro did a great job working with the Booster Club. They bought the high jump mat last year. Paul Korse did a great job negotiating a smart lease with Canon, so we’re not worried about replenishing the amount of toner. We’re learning to live a little bit differently.”

The priority on the lists are the staffing positions, due to increases in student enrollment.

Kobza’s budget proposal would bring back the special education position at Masuk and the world language position, which is a Spanish teaching job split between Masuk and Jockey Hollow Middle School. It would also restore a sixth-grade teacher.

In addition to increasing funding for maintenance, Kobza’s budget would restore professional development for staff, including conferences and renewing the district’s relationship with the Teachers College.

The superintendent also shared some of the things he wants to restore in the future, including a k-5 math coordinator, k-5 science coordinator, two teacher interventionists for the elementary schools, and a library media specialist at Stepney Elementary School.

Schools to be proud of

The superintendent expressed pride in the school district, recalling how Monroe has had Schools of Distinction and how Masuk was recognized as a National Blue Ribbon School.

Following the Vision of the Graduate, the district has identified the knowledge and skills it wants its students to have, including critical thinking, communication, collaboration, empathy, and social-emotional fortitude — making Monroe’s graduates college and career ready.

Kobza said 90 percent of Monroe’s high school graduates go on to two- or four-year colleges, attending some of the best universities and going on to be good, successful and productive members of society.

“I’m always amazed at the philanthropic efforts of our students,” he said, adding they do tens of thousands of hours of community service every year.

Kobza touted the district’s Unified Sports programs, other extra curricular programming and the partnerships within the community.