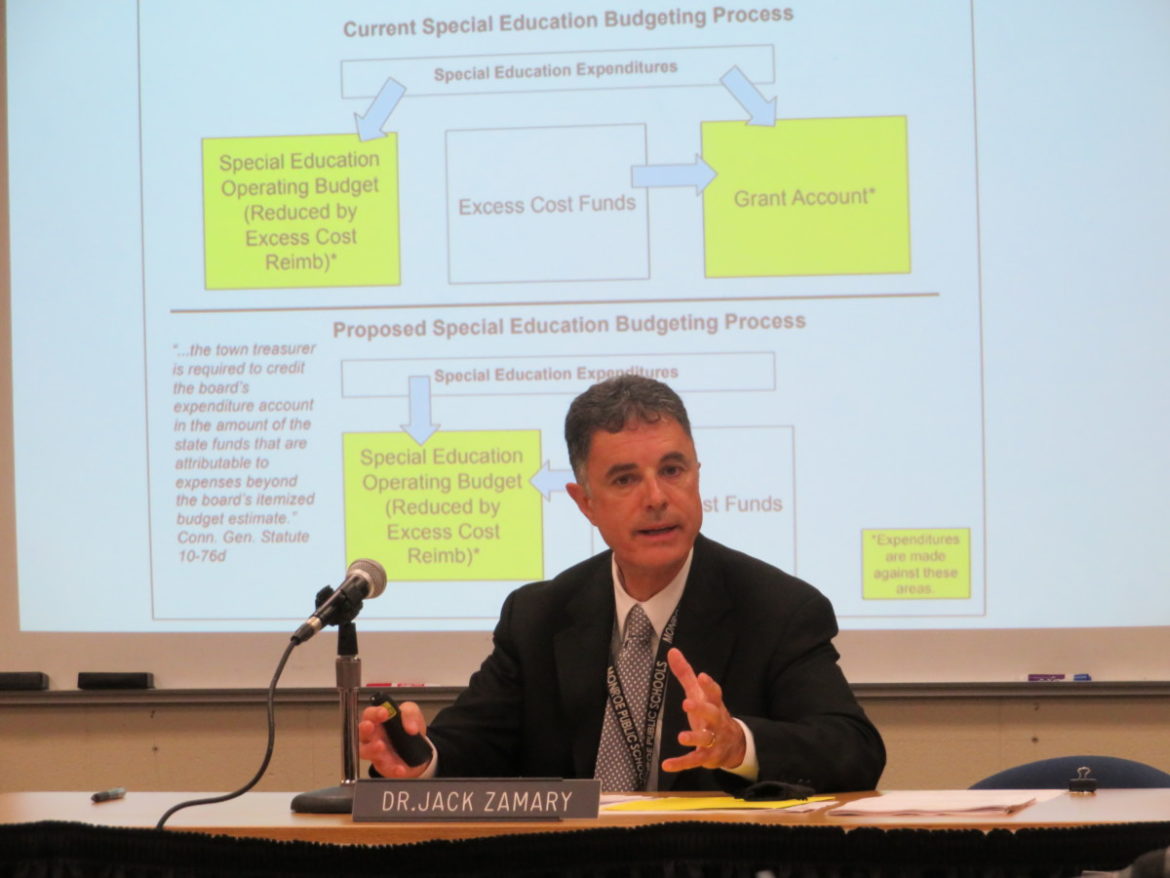 Frank Connolly, the interim finance director for Monroe public schools, says the state government is shortchanging Monroe by $342,177 in reimbursement for its excess special education costs, at a time when Superintendent of Schools Dr. Jack Zamary is projecting a $307,029 budget deficit.

These numbers were shared as a monthly special education update for the Board of Education in a meeting at Masuk High School Monday night.

“We will update this each month for you going forward,” Connolly said, adding of the projected deficit, “when I show you what you’re not getting from the state, it’s almost the same number.”

Special education makes up around 20 percent of the Board of Education’s budget when its share of transportation and “other professional services” are factored in, Zamary said.

Zamary explained how federal laws drive special education requirements and school districts are bound to pay for whatever a student’s planning placement team (PPT) comes up with for the student’s individualized education plan (IEP).

When there are changes to an IEP, to state requirements or new special education students enroll in the district, the Board of Education budget takes on unanticipated costs.

In the 2018-19 Board of Education budget, a deficit from unanticipated special education costs ballooned to $763,000, a financial hole that was made up through reserve funds, a spending freeze by the district and assistance from the town.

Because the problem was publicized late in the fiscal year, the district is doing monthly updates going forward to keep the school board informed on the special education budget.

A spending freeze is currently in place for the 2019-20 fiscal year to create savings to handle any potential deficits.

Board of Finance Vice Chairman John Ostaszewski, who attended Monday’s meeting, said the town has a $400,000 contingency fund that could be used for special education cost overruns. However, he added that money is not guaranteed because it could be used for any kind of unanticipated costs the town may have.

“I think we’re in trouble because we just haven’y been putting out enough money,” said Jerry Stevens, a school board member.

When it comes to budgeting, Connolly said there are two big options, one is adopting a gross budget meant to cover the entire special education program, and using the Excess Cost grant as a contingency (only to be spent for special education) and returning any unspent funds to the town.

The other would be net budgeting, like Monroe has been doing, and building a contingency for two special education students in anticipation of changes for example.

Board of Education Chairwoman Donna Lane and Connolly agreed there should be a discussion with the Board of Finance on what to do.

Connolly said some districts do gross budgeting and put any extra Excess Cost grant funding into an account to build a contingency for special education over time. He added this has to be done in the municipal budget, because school boards are not allowed to carry over money from one budget year to the next.

Kay Moser, director of student services, and Darleen Fensore, the assistant director, explained how the special education program works and broke down the unanticipated costs, while Connolly went over the Excess Cost funding.

To give an idea of how quickly special education costs can escalate, a breakdown provided by Moser showed that three new high cost students in Monroe accounted for the un-budgeted amount of $152,705 for tuition, support staff and education.

Board of Education Vice Chairman George A. King, III, asked how the district can get closer to the actual budget numbers earlier in the year.

Zamary said Wilton and Ridgefield’s school districts each had a study done on their special education programs. If Monroe wants to do it, he said the cost is anywhere from $30,000 to $50,000.

Among the things Monroe public schools is doing differently, is it updated its Excess Cost projections using a five-year-average.

The superintendent said he’s continuing to work with First Selectman Ken Kellogg, State Rep. J.P. Sredzinski and other school districts and legislators on creating a regional center for special education.

Though he cannot estimate how much money a regional center could save, Zamary said it would give them a better shot of controlling costs than doing nothing. He said, “the definition of insanity is to continue to do the same thing and expect a different result.”