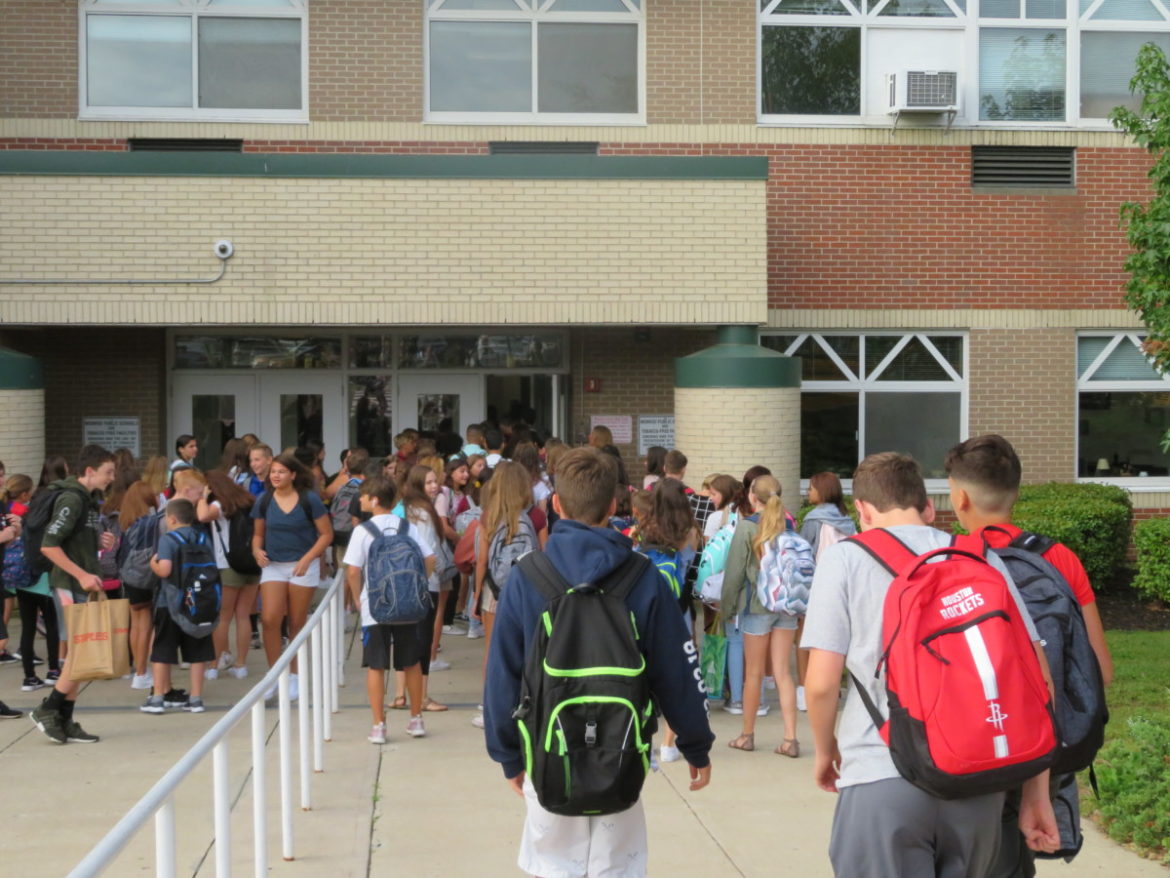 The Board of Education is considering removing Jockey Hollow Middle School from the National School Lunch program, so students can have more desirable food options.

As enrollment at many Connecticut school districts continues to drop, Monroe’s public schools’ rose by 15 students to 3,136 this year, according to the latest numbers provided by Superintendent of Schools Dr. Jack Zamary.

Meanwhile, the Board of Education agreed to fund a demographics study at the request of the town to determine what impact mixed-use development proposals with residential apartments could have on Monroe’s schools.

Zamary told school board members at their Tuesday night meeting that the school district’s enrollment continues to fluctuate.

“We have eight new students in the registration process not reflected in the numbers,” Zamary said. “We still have comings and goings. That’s why it’s not official until Oct. 1.”

Outplacements in the district dropped from 13 to 12.

To put the numbers in perspective, Monroe’s student enrollment was still higher 10 years ago at 3,894 in 2009, according to statistics from the school district. However, Zamary points out that Oxford students were enrolled at Masuk back then.

Taken together, Milone and MacBroom’s projections were off by 95 students over a four year period.

“It’s an inexact science,” Zamary said of enrollment projects. “That’s why it will always be a little off. But Milone and MacBroom’s experts will always be better than in-house.”

Board of Education Chairwoman Donna Lane recalled how the board decided to stop doing enrollment projections because of how inaccurate they were.

Zamary said districts like Trumbull do one every year, adding Trumbull is also seeing enrollment increases. He said another neighboring district, Easton-Redding-Region 9, continues to see a drop in its enrollment, though it is stabilizing.

“Region 15 has actually hired three demographers and they’re triangulating to try to get the best numbers,” Zamary said.

A new study or a Ouija board?

Lane said town officials have asked the school board to conduct a demographics study and to provide input on how developers’ mixed use applications, a combination of commercial buildings with residential apartments, could affect the school system.

Mitchell DeEsso has a conceptual plan for a mixed-use development with up to 50 apartments at the Trumbull-Monroe border and other proposals may be in the pipeline.

Zamary said he spoke to First Selectman Ken Kellogg about it Tuesday, adding the town is trying to understand the effect on Monroe’s schools while coming up with guidelines for mixed-use developments.

The superintendent expressed his belief that Monroe public schools providing input would represent a nice opportunity for the district.

The superintendent said the last time the school board updated enrollment projections was in 2016. He said a demographics study would cost $11,500 this time around after the district got a consortium price, knocking down Milone and MacBroom’s initial offer to do a study for $12,500.

Of enrollment projections, Dr. Alan Vaglivelo, a board member, said, “these numbers are so inaccurate. I feel like I can go to Walmart and buy a Ouija board for five dollars and come up with the same numbers.”

Lane said board members had to figure out if they want to spend $11,500 or risk being blindsided by getting 200 more students if mixed-use proposals are approved and significantly impact the district.

Jerry Stevens, a board member, asked why the Town Council or Board of Finance could not pay for the study out of their budgets. Fellow board member Jeff Fulchino also wondered if the town could pay for it.

But fellow board members David Ferris and Secretary Shannon Monaco pointed out how the town recently helped the school district out of a financial hole in its 2018-19 budget.

Monaco said doing the study would continue a good partnership between the Board of Education and the town.

Stevens said if Zamary and interim finance director, Frank Connelly, believe the study is necessary and know where to find the money in the budget, he would support it.

Vaglivelo was harder to convince.

“We’re in a budget freeze. We have overcrowding in some classrooms and we’re going to spend money on a study?” he said. “I just can’t support it at this point.”

A motion to fund the demographics study passed by a vote of six to three with Ferris, Monaco, Lane, Jessica Katuska, Stevens and Vice Chairman George A. King, III, in favor and Vaglivelo, Fulchino and Christina Cascella against it.