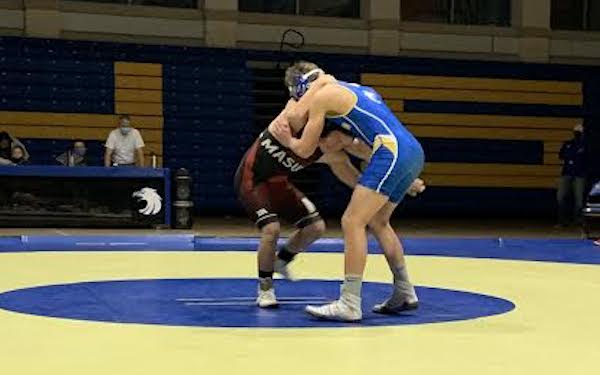 MONROE, CT — James Dutkowsky, 16, a Masuk High School sophomore, has Down syndrome, but that doesn’t stop him from keeping up with his brothers. James plays on his school’s football and basketball teams, though it isn’t always easy.

“James can very easily give up sometimes,” said his mother, Lisa Dutkowsky. “Sometimes he feels like he just can’t keep going. However, he’s always been encouraged by his teammates. When he gets verbal encouragement from his coaches and teammates he keeps going.” 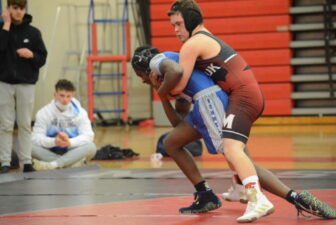 Junior varsity wrestler James Dutkowsky of Masuk is on his way to victory.

James recently had one of those night’s when the Panthers’ wrestling team traveled to Stratford High School for a match. It was his turn to face an opponent on the mat, but James kept saying, “I can’t. I can’t. I can’t.”

This time, his opponent, Stratford High School wrestler Giuseppe Amat Paredes, joined  James’ coaches and teammates in encouraging him with verbal cues. This inspired James to compete for a full three rounds, with Paredes giving him encouragement throughout. It was James’ first time going the distance and he won the match on points 12-10.

Ted Oczkowski, who officiated the match, said Paredes had tears in his eyes, overcome by the emotion of the moment, and recalled how James first ran to the Stratford side, before joining in a jubilant celebration with his teammates.

Oczkowski shared his memory of the match in a video made by the Connecticut Interscholastic Athletic Conference (CIAC), highlighting Paredes for his sportsmanship and James for his courageousness.

Lisa Dutkowsky, who also has an older son, Dan, an 18-year-old senior, on the wrestling team, could not see the match in person, because Masuk parents could not attend due to COVID protocols. But she noticed something different about James when her sons came home.

“He was beaming when he got home that night, more than any other night,” Dutkowsky said, “and he said, ‘hey mom, I won my match!’ and he was just very proud of himself. At the time, I didn’t know the details. He was very tired, in a good way, and he went to bed early.”

About two days later, Masuk Athletic Director John DeGennaro emailed a video of the match to Dutkowsky. “Then he called me and said, ‘the CIAC wants to make a video out of that match. Do I have your permission?’ Yes!” Dutkowsky recalled. “It was amazing how it just came to fruition.”

After watching the video, Dutkowsky said she was impressed with the compassion Giuseppe Amat Paredes showed for her son.

“The thing I like about Giuseppe is he doesn’t know James at all. He just met James two minutes before going on the mat,” Dutkowsky said. “What strikes me is a young man that age, his compassion kicked in and he just knew how to verbally prompt James. That impressed me.”

Dutkowsky recalled another time when a junior varsity wrestler from Bunnell High School also did not give up on James, giving him a good match and letting James pin him.

“So I thank him and the Bunnell coaches for their compassion and letting James know he mattered,” she said. “But the Stratford wrestler was the first time an opponent encouraged James to go the entire three rounds without giving up.”

Dutkowsky also credits the referee for seeing what was happening, encouraging both wrestlers to keep going and scoring the match fairly.

“He just did a really great job as a neutral party, as a referee watching these two guys,” she said. “I’m just really grateful to him for being a good guy about it.”

“We faced opponents this season who showed no compassion for James,” Dutkowsky said. “It was a small handful. James doesn’t have to win every time, but I think just showing a little bit of compassion is important. But it doesn’t always happen and we get that and that’s okay.”

James has played youth football in Monroe and is on the Masuk football team. Dutkowsky said her son first got into wrestling through the Panther Wrestling Club run by the Hoskins family, with Dave Hoskins and two brothers Kyle and Cody. Cody is the head coach of Masuk’s team and Sal Longo is his assistant head coach.

James’ involvement in sports has resulted in memorable moments, including his first touchdown run, and now his family can add the CIAC video.

“I probably watched it 17 times,” Dutkowsky said, adding she also shared it with family and friends. “It’s not so much about James as it is Giuseppe. The kid is amazing. It was just one of the coolest things that happened to James. This was one of the top things.”

3 thoughts on “Stratford grappler encourages James to go the distance”