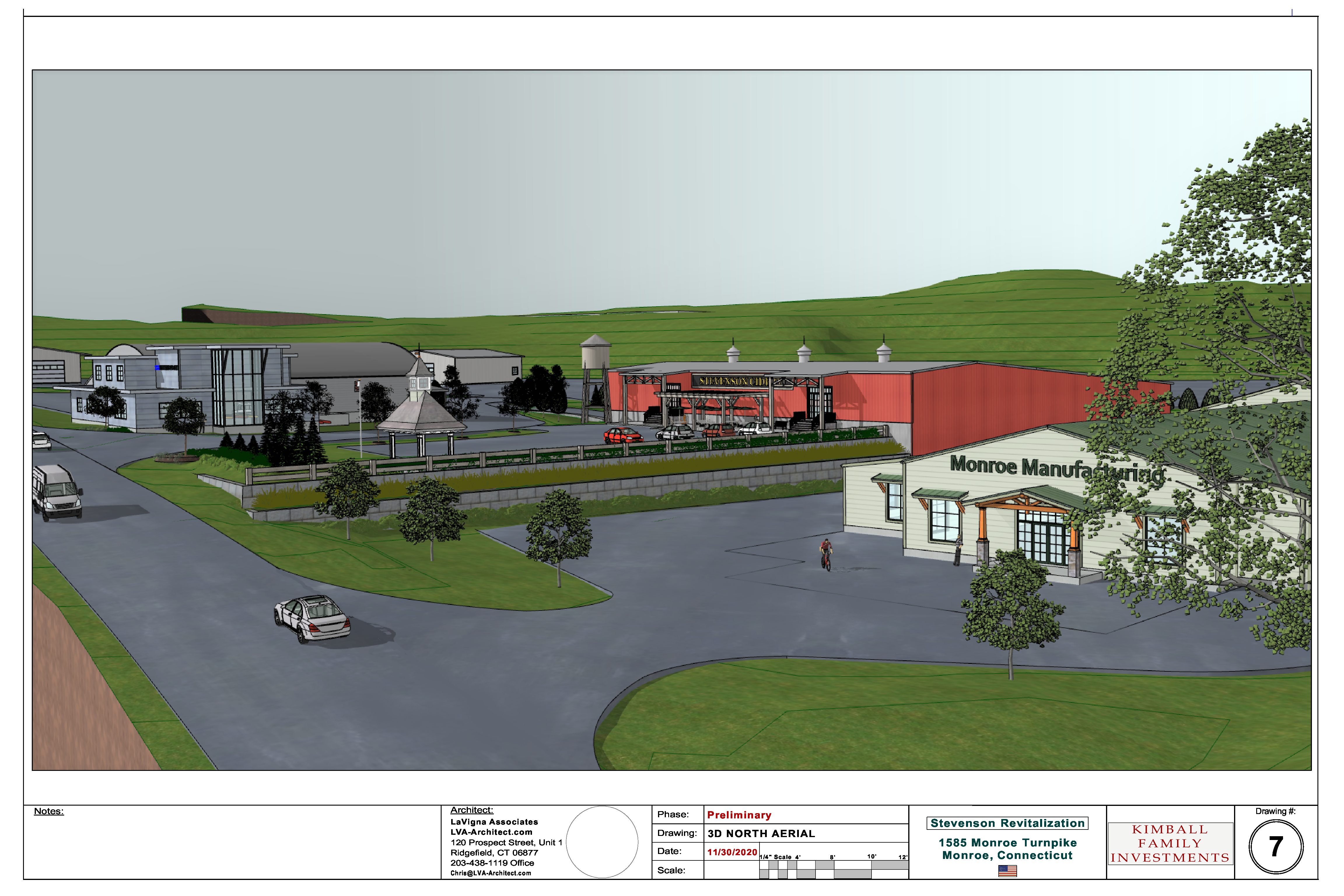 Chris LaVigna, an architect with LaVigna Associates in Ridgefield, created a rendering of how the former Stevenson Lumber site could be developed.

MONROE, CT — A visual presentation of the former Stevenson Lumber property shows a future with driveways off Monroe Turnpike landscaped with a variety of trees and shrubs, and parking lots with green spaces breaking up the pavement.

A New England farm theme for the renovated industrial buildings show potential uses, including a water sports store, taking advantage of the close proximity to the Housatonic River.

A Stevenson Cider sign on a red barn-like building has a large area in front, where there could be outdoor seating with food trucks for the brewery. An off-white building has a sign that says Monroe Manufacturing, and vehicle storage for boats and RVs are in the back of the property.

“We want to renovate these old buildings into something nice, optimistic and fun for the town,” said Chris LaVigna, an architect with LaVigna Associates in Ridgefield.

He said features on the site could include a gazebo and the gatehouse close to the road.

John Kimball, an acting consultant for the applicant, Kimball Family Investments LLC, owned by his wife Jill, son John Jr. (Jack) and daughter Elizabeth, wanted LaVigna to make the presentation, so commissioners could have a better understanding of how the text amendments could be applied to the zone.

The former Stevenson Lumber property at 1585 Monroe Turnpike and 421 Old Zoar Road was most recently used by Truss Tech, a manufacturing facility for pre-engineered roof and floor wood trusses.

Kimball Family Investments is proposing text amendments and a zone change for a new Stevenson Business District 2, which would expand permitted uses on the site by allowing commercial parking and indoor cultivation facilities.

The parking facility for commercial trucks is meant to earn income in the early phases of the project, in a venture that may not be a permanent one.

Kimball said the site is roughly 40 acres, approximately 30 of which was developed with paved areas, and nine abandoned buildings. The plan is to reduce the amount of pavement as the site is developed.

The land is divided into a few parcels, which could be leased or sold separately. If that happens, Leon Ambrosey, a commission member, said the site, buildings and landscaping may not look like the virtual model. Kimball agreed.

On Thursday, presenters for the applicant included Larry Edwards, an engineer from J. Edwards & Associates in Easton, Tracy Chalifoux a landscape architect from Danbury, and LaVigna.

Though all driveways already exist, he said a Connecticut Department of Transportation permit is still needed.

Currently, the Kimballs do not know who the tenants of the buildings will be. Edwards said each individual project would be subject to a special exception permit.

“We’re giving a broad brush aspect which demonstrates how each one of these parcels can support its own parking, septic system and access,” Edwards said.

The proposal includes a traffic circulation plan. The site already has utilities serving all of the buildings and Edwards said the power lines for parcels one, two and three will go underground.

“We’re proposing additional green space, basically along the edge of the driveway, and removing some of the access roads with interconnected parking if necessary,” Edwards said.

Chalifoux, who designed the landscaping plan, said entrances would have welcoming plantings with low-maintenance shrubs, perennials and a diversity of trees. The driveway would be lined with canopy trees, including ginkgo, honey locust and European hornbeam.

“We’re turning a hardscape into a softscape in terms of planting islands,” Chalifoux said.

Large evergreens along Monroe Turnpike would help to screen Building No. 2, she said, and the entrance from Old Zoar Road will have flowering shrubs, perennials and evergreens. The northernmost entrance would have some white oaks.

A later phase would include a berm with a mix of canopy trees to screen a storage area.

Vice Chairman Bruno Maini asked Kimball if the project would be done in phases or all at once and Kimball said landscaping, the driveway, tree-lined drive, bringing utilities underground, removing old fencing and sprucing up the entrances would be done right away.

He said they have already been cleaning up the buildings, tackling one at a time.

Once they are done with the curb appeal, Maini asked what the next step will be.

Kimball said someone is already interested in the mill building and hopes to move in as soon as August or September.

Though the goal is not to rely of major water dependent uses, Kimball said the buildings and the septic capacity will “almost dictate what they can be used for.”

Robert Westlund, a commissioner, praised Chalifoux for her landscaping plan, but asked if there could be additional screening on the southern part of the border. Kimball said the topography makes it difficult, because trees put in would have to be 90-feet-tall and wetland areas could make it impossible to get in there.

Westlund also asked about lighting in the parking lots.

Kimball said the site currently has high pressure sodium lights, which are not Dark Sky compliant. Those lights would be taken down and replaced with LED, down-lighting that is compliant with Dark Sky standards. Each business that comes in will submit a lighting plan.

Asked about the drainage plan. Kimball said there are catch basins in the back parking area now, but no stormwater treatment.

He said he recently walked the site with a representative of the Pootatuck Watershed Association and they talked about how water is coming off the site hot and going into the Halfway River, and of the need to slow it down.

When individual applications for the Stevenson property come before the commission, Kimball said the town will have to approve lighting and stormwater treatment plans for each project.

Asked about fire suppression, Kimball said Aquarion Water Co. estimates the cost of extending a water line for a new fire hydrant would cost $1 million, so instead of that, they could install a large water storage tank on the property.

Wade Alix, of Easton, a relative of the owner of the property across the street from the site, expressed reservations about commercial parking for trucks, but said he was excited about the redevelopment of the Stevenson Lumber property.

Residential neighbors asked about an enhanced landscape buffer and for safety checks due to blasting that had been done along one border. In both cases, Kimball said the subjects could be raised at future hearings for projects proposed in those areas of the site.

Commissioners and land use staff discussed the text amendment and Planning and Zoning Administrator William Agresta, suggested that the town attorney review it. Kimball said he welcomes that.

After two-and-a-half years of working with town officials on the proposal, he expressed his belief it is the best vehicle the town has to repurpose the site.

“We’ll try to put some tenants on this property that was languishing for two years, while we’ve been in the planning process,” Kimball said. “We worked well with the town to come up with the best regulations we can.”

He said now is the time to massage it and move forward. The hearing has been left open. Kimball expects to address comments and concerns from town staff, commissioners and citizens at the next meeting.