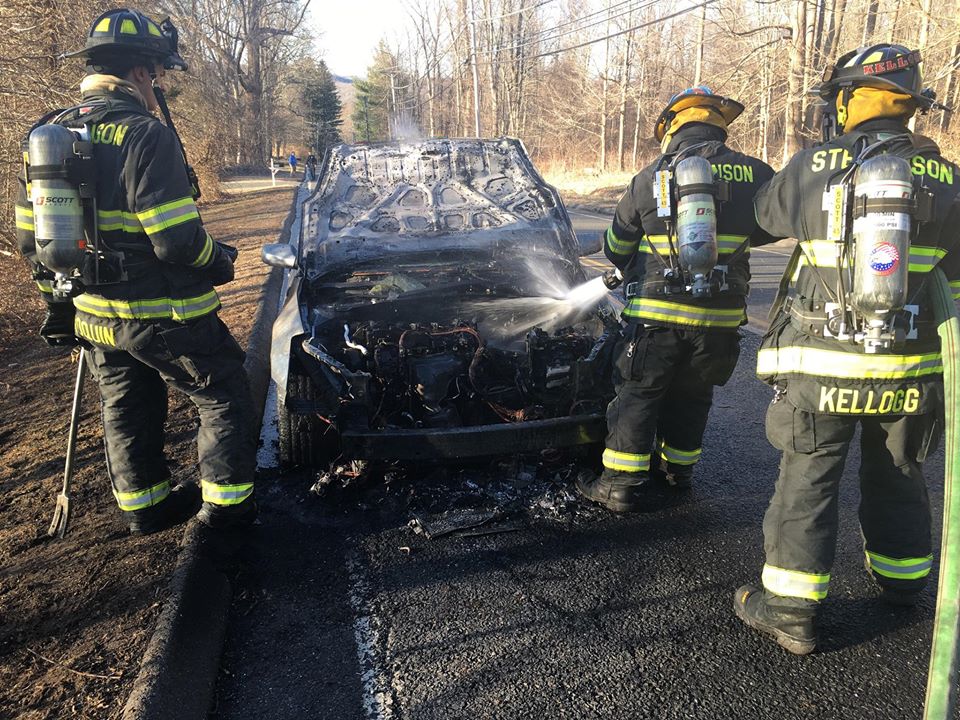 Stevenson firefighters spray a Nissan Altima with water to ensure the car fire is completely out after responding to the call on Route 111 Sunday. Stevenson Volunteer Fire Co. Facebook photo

MONROE, Conn. — Stevenson firefighters responded to a car fire on Monroe Turnpike just after 5 p.m. Sunday and quickly extinguished it.

Police said the front end of the gray Nissan Altima was fully engulfed in the 1450-block of Route 111.

The driver, Milton Pinto-Anariba, 40, was not injured, according to the report.

A post on the Stevenson Volunteer Fire Company Facebook page said Engine 302 responded to the call and the road was closed down for a short period of time.

A Monroe man was charged with DUI following a traffic stop on Pepperidge Road Saturday night.

Kevin Donovan, 64, of 20 Pepperidge Road, was charged with operating under the influence and failure to drive upon the right. He was released on $500 bond for a March 16 court date.

Police said Donovan was pulled over for allegedly driving his vehicle erratically around 11:19 p.m. and field sobriety tests were not performed to standard, leading to his arrest.

A Guinea Road woman reported the theft of a $1,000 gold necklace and a $75 necklace from her jewelry box Saturday.

The victim told police she had painters do interior work in her home from Feb. 17 to March 2.

Police said the incident is under investigation.