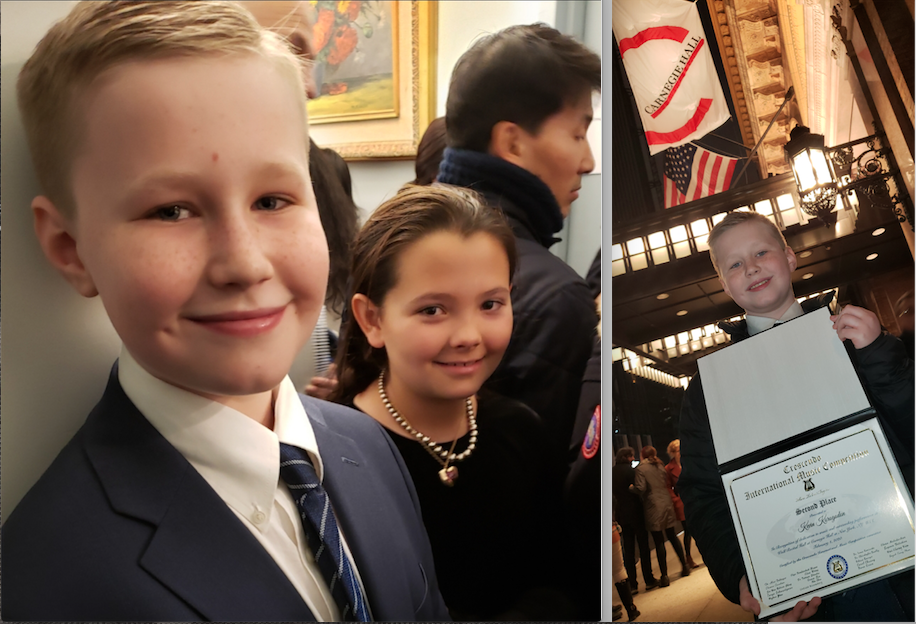 Kevin Korogodon, 11, of Monroe, performed in a concert at Carnegie Hall on Saturday. To his right is his friend Lucia Trudo, of Danbury, who also performed. Contributed

Kevin Korogodon, 11, a Stepney Elementary School fifth-grader, spent his Saturday playing the piano in the Winners Recital of the Crescendo International Competition at Carnegie Hall in New York City. It marked the second time the talented young musician performed at the prestigious venue.

“It was fun and I was really nervous at the same time,” Kevin said of his first time playing on the concert stage. “At first, I did not want to go on stage. It was so nerve-wracking that my legs were actually shaking. The lights were super bright, almost too bright! And the crowd was silent as night, but huge.”

Kevin’s interest in playing the piano was sparked in the second grade, when his music teacher had students try out Casio’s at home.

“I like classical music,” he said, “Mozart, Beethoven and Bach.”

Kevin, who enjoys music classes at Stepney Elementary School, practices the piano about seven days a week. His mother signed him up for lessons at the Creative Music Center, before deciding to get private lessons with Robin Giesbrecht.

“I had a feeling he would enjoy the beauty of the instrument and appreciate being able to play for people and give them joy,” said Julie Korogodon, Kevin’s mother.

Kevin has now been playing the piano for almost three years.

This year, Giesbrecht accepted a position with Sony Music, but his wife, Arianna, was able to add Kevin to her student roster.

“They are both really good overall,” Kevin said of his teachers. “It is a real pleasure to work with them.”

In 2019, around 5,000 applicants, ranging in age from 5 to 22, competed in round one in November and December. The competition to perform in a Winners Recital was held globally in the USA, Canada, China, Korea and Russia.

Kevin’s first round audition was held in Manhattan.

Those earning first or second place honors in their age group were invited to Winners Recitals performed over several weekends. Of 30 recitals with 30 children in each, one in five who auditioned earned the privilege to play at Carnegie Hall, according to Korogodon.

Robin and Arianna Giesbrecht encouraged Kevin to compete over the past two years. Second place finishes each year earned him the opportunity to compete in the age 8 to 10 group and the 11 to 14 group.

“We were thrilled that he received second place honors that qualified him for the Winners Recital,” Korogodon said of her son, adding of this year, “it’s very stiff competition and being the youngest in his age group, we were cautiously optimistic, and then extremely happy for him when he was selected.”

Kevin’s friend Lucia Trudo, of Danbury, who plays the keyboard with him in the kids worship band at Walnut Hill Community Church in Bethel, also made the cut for the recital at Carnegie Hall.

“Lucia got first place honors, which means she is invited to a student exchange program in Japan,” Korogodon said. “It’s a wonderful opportunity that the Crescendo organization gives kids to get excited about music and aim for a thrilling goal.”

“Lucia auditioned in the time slot adjacent to Kevin and they got to encourage each other,” Korogodon said.

On Saturday, both were scheduled to play in the same recital at 3:30 p.m., so Korogodon said they kept each other company backstage, hours before going on.

Korogodon was proud of her son’s performance.

“It’s great to have seen him really do his best,” she said Monday. “It was less stressful this year than last, because we knew what to expect. But you never know what nerves might do to a performance like that. Despite being nervous, he really did wonderfully. Yesterday was truly a day of rest after all the excitement.”