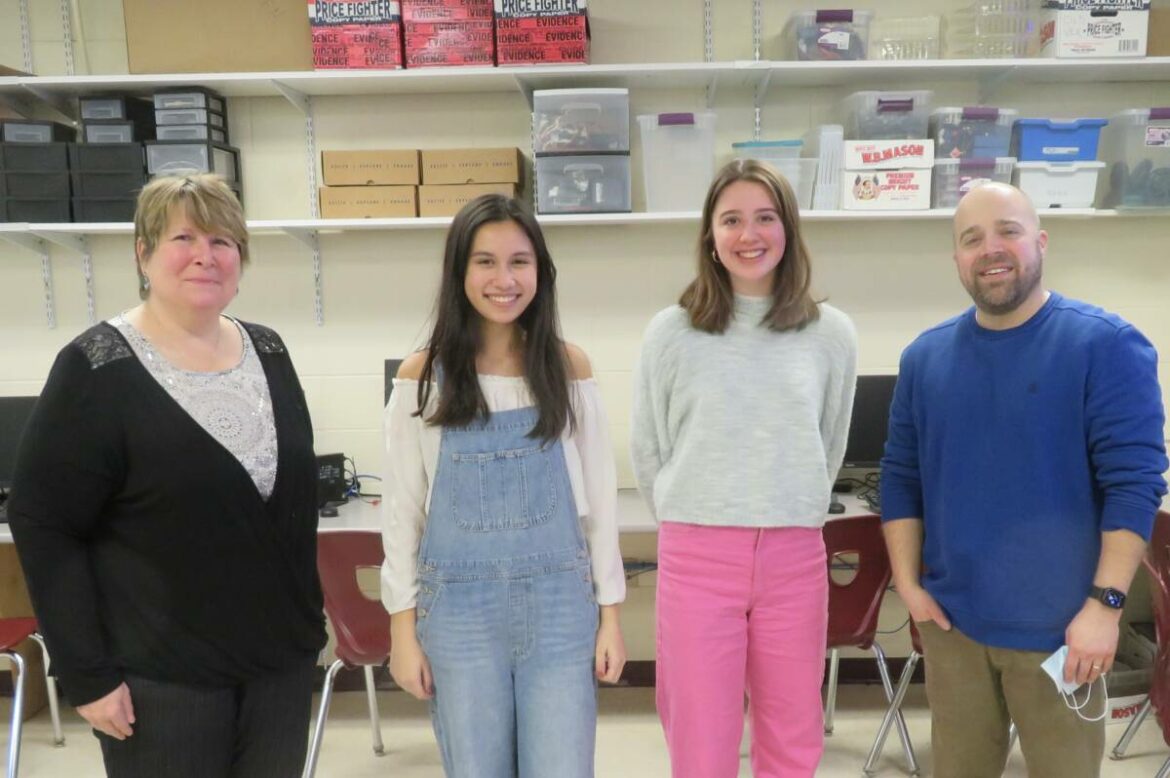 The hearts sold for a dollar each and songs were five dollars a piece, raising a total of $228 to help Monroe families in need with their utilities and home heating bills. Last week, Kearney and Cusa presented the check to Kim Cassia, the town’s Community and Social Services director. 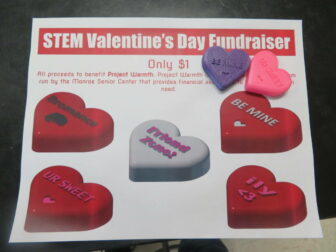 The teens made plastic hearts with the help of their pre-engineering teacher, Nick Natalino, who produced the hearts with a 3D printer.

While the Monroe Food Pantry always receives donations, Cassia said there have been times when the account for Project Warmth ran out of funds.

“Any donation that comes in for Project Warmth is so appreciated,” she said.

Cassia said the program pays for oil, propane and even wood pellets for wood burning stoves. It is also used to pay bills to keep the power on for families.

“Everything goes right to the supplier,” she said. “We get their bill from the oil or propane company and pay them directly.”

Since the STEM Academy came into being in 2011, Natalino said the school stressed the importance of community service with students doing volunteer work, such as organizing the Monroe Food Pantry, and organizing fundraisers to benefit nonprofits like the March of Dimes and The V Foundation.

“It’s part of growing up,” Natalino said. “It’s part of the educational experience. I believe the social piece is just as important – that we’re sending students out as good citizens who understand that other people need help.” 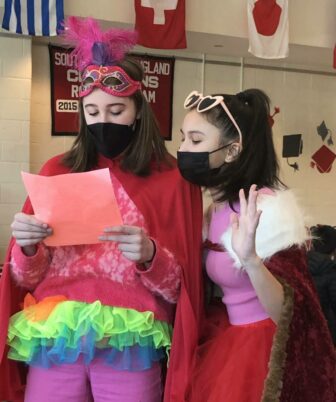 Cusa said the hearts for the Valentine’s Day fundraiser had customized colors and messages.

“We came up with more modern slang,” Kearney said.

For instance, she said “ily” means “I love you” and a less-than sign and a three make a heart (<3). Among the biggest sellers were “Friend Zone” and “Bromance”, according to Natalino.

Every day the girls reminded their classmates of the fundraiser during morning announcements.

“Grace and I ate lunch at a table and sold valentines,” Cusa said.

The three top contributors were mentioned in announcements, so Cusa and Kearney sometimes let one of the top contenders know when someone was ahead and they needed to buy more hearts.

The custom songs were the biggest seller.

“They write custom songs for students,” Kearney said. “One wanted the Canadian anthem,” she added of some of the more unusual requests.

Kearney and Cusa were not shy about singing in front of their classmates.

“We did ‘Call Me Maybe’ in Spanish for one of the students, so we had to learn Spanish,” Cusa said. “Some students feel embarrassed singing in front of other students.”

“We thought it was fun,” Kearney said.

Cusa said they both wore tutus. “Grace wore a rainbow tutu and I wore a red one my mom bought for 2/2 Twosday. I wore a big red cape.”

“I had a cape as well,” said Kearney. “I wore a masquerade mask.”

“I wore sunglasses,” Cusa said, “and both of us wore pink jeans and as much pink as we could.”

One day, Cusa said a speaker inside homeroom played the George Michael song, “Careless Whisper,” and they danced to it.

“At first, we just wanted to do this for fun,” Cusa said, “but it’s good that we put this money to good use. It just makes it that much better and gives us more motivation in the future.”

“That was in the back of our minds – that we were really helping people,” Kearney said, “and that was great.”