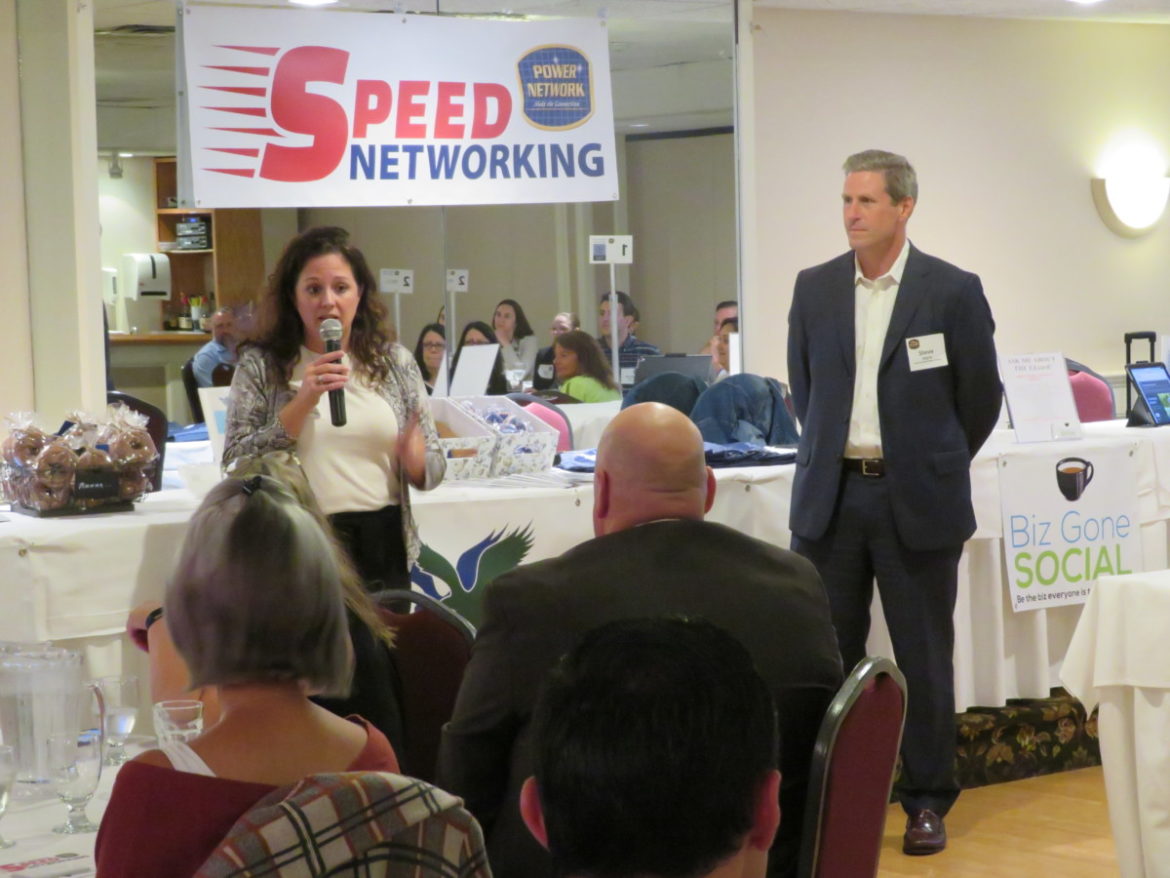 Speed networking at Roberto’s Restaurant featured 90-second elevator pitches among dinner guests seated around seven tables in the banquet room Thursday. A cow bell was rung when everyone had a turn and it was time to switch tables. By the end of the night, each participant had promoted their business directly to all 49 of the other guests.

The 10th annual Speed Networking event is sponsored by the Power Network, a leads group of the Monroe and Newtown chambers of commerce.

Beth Stoller, a board member, said some people go to networking events only to shyly stand in a corner or tend to cling to the few people they know. But speed networking forces participants to interact with everyone in the room.

“You can’t stand in a corner,” she said. “This opens up conversation. You can meet someone you can partner with. The bottom line is creating relationships and learning how to help each other.”

For example, she said there is a natural synergy between a real estate broker and someone who makes home inspections, so the two can make referrals for each other.

Fifty seats were available for Thursday’s event and Stoller said all were sold out, adding the proceeds are used to fund more Power Network events, allowing members to learn together. 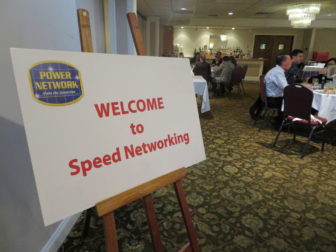 The 50 participants broke up into groups at seven tables. A cow bell was rung and the table leader passed out business cards and launched into her 90-second elevator speech. When her time was up, the sound of chimes could be heard. After a 10 second break, the cow bell was rung again and a second person at each table made a pitch to their group.

Each participant had an envelope with a number sequence for the tables. When it was time to move, each went to the next table on their envelope.

Stoller said event founder Harriette Treviño came up with a formula to ensure everyone gets a chance to sit together during the night.

Before the speed networking began Thursday, Danielle Brown, a broker with Double Eagle Insurance Agency, a Westport firm and the main sponsor of the event, addressed the participants.

“If you meet one person and make a connection, that’s what this is all about,” she said. 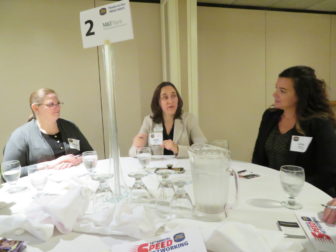 In round one of Thursday’s speed networking, Agata B. Kozak, a banking officer and branch manager for M&T Bank of Monroe, got the ball rolling at Table two.

“We’ll be there for you,” Kozak said of her team. “You don’t even have to come to us. We’ll come to your business, because we know your time is valuable.”

When the chimes sounded and the cow bell rang, Lisa Berte, a web designer for Lab Media Designs, told the group how her business makes custom websites for its clients, offers hosting and domain services, website maintenance and digital marketing services.

Brian Sherwood talked about his Monroe-based business, Sherwood Enterprises, which offers event consulting, marketing research and strategies for its clients.

Linda Sparaco, the owner of Emalyn Sweets in Brookfield, makes “fine handmade chocolate,” according to the business cards she handed out. Each card had a sweet attachment: a piece of dark chocolate.

“I’m a chocolatier,” she said. “It was a hobby that became a business. We do parties and party platters.”

Emalyn Sweets has over 1,000 molds to make chocolate for a wide variety of themes. Sparaco’s business also offers barks, including caramel, orange and chili.

“I would like to make more people’s day and sell more chocolate,” she said.

Gail Yurman, an independent distributor for Bemer Group of West Haven, talked about its products, which “boost the blood flow, thus benefiting the body’s cardiac system, regenerative abilities and even mental acuity,” according to its website.

After the last cow bell ring for round one, Wendy Austin, a senior marketing specialist for WSI Healthy Digital Solutions, gave her pitch. “I’m looking to make connections and have a local presence,” she said.

Stoller said speed networking is a great way for participants to practice their elevator pitches. As an added bonus, a list of all 50 of Thursday’s attendees was distributed to each participant, allowing them to leave with new contacts.