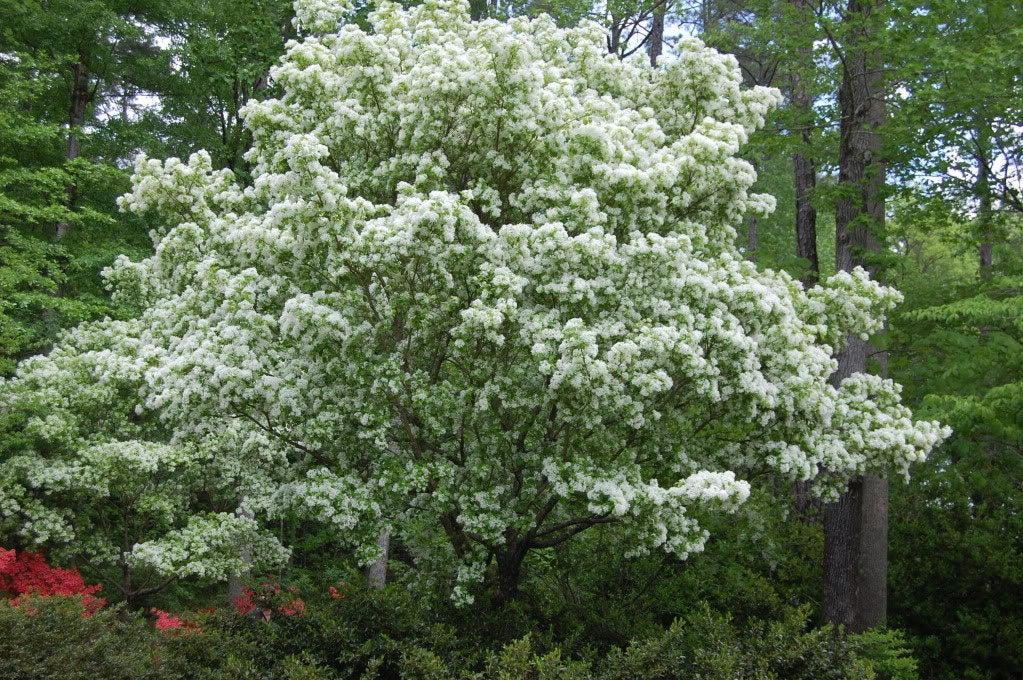 MONROE, CT — The Save Our Stepney (SOS) Task Force is donating a Fringetree to be planted on the Stepney Green as part of the town of Monroe’s Arbor Day celebration.

“We wanted to select a tree that is native to the area, produces a distinctive fragrant bloom, provides berries for birds and quite frankly there are no other fringetrees in the town of Monroe,” SOS Task Force Vice President Kathy Loehr said.

Park Ranger and Tree Warden David Solek will plant the tree at the northern point of the Stepney Green on Main Street on Connecticut’s Arbor Day, Friday, April 30, at 10 a.m.

First Selectman Ken Kellogg will attend the ceremony, along with Loehr and Parks and Recreation Director Missy Orosz. Kellogg will read an Arbor Day Proclamation and State Rep. Tony Scott, R-112, will speak.

The Fringe tree (Chionanthus virginicus) has often played twelfth fiddle to dogwood, saucer magnolia, flowering cherry, Bradford pear, and numerous others choices for spring-flowering trees. Indigenous to the eastern U.S., it grows from Canada all the way down to the Gulf Coast. It’s tougher than dogwood, more dependable than saucer magnolia, longer-lived than cherry, and smells better than a Bradford pear tree. And it’s beautiful.

Fringetree gets its name from its clouds of fleecy white, softly fragrant flowers that hang from the branches in late spring and early summer. Other common names are grancy graybeard and old man’s beard. Trees can be either male or female. Males sport larger, showier blooms, but females form attractive, blackish-blue fruits that birds like.

Arbor Day, which literally translates to “tree” day from the Latin origin of the word arbor, is a holiday that celebrates the planting, upkeep and preservation of trees. For centuries, communities spanning the globe have found various ways to honor nature and the environment.

The origins of Arbor Day date back to the early 1870s in Nebraska City, A journalist by the name of Julius Sterling Morton moved to the state with his wife, Caroline, in 1854, a little more than 10 years before Nebraska gained its statehood in 1867. The couple purchased 160 acres in Nebraska City and planted a wide variety of trees and shrubs in what was a primarily a flat stretch of desolate plain.

On January 7, 1872, Morton proposed a day that would encourage all Nebraskans to plant trees in their community. The agriculture board agreed, and after some back-and-forth about the title—the event was originally going to be called “Sylvan Day” in reference to forest trees—Morton convinced everyone that the day should reflect the appreciation of all trees, and “Arbor Day” was born.

It wasn’t until 1970, however, that Arbor Day became recognized nationwide thanks to the efforts of President Richard Nixon. This move was in line with other environmental actions taken by Nixon in the 1970s, including the passing of The Clean Air Act, the Endangered Species, the Clean Water Act and the National Environmental Protection Act, along with the creation of the Environment Protection Agency.

The national observance falls on the last Friday in April. However, not all states celebrate Arbor Day at the same time of year. Although Julius Morton died in 1902, well before the holiday was given a formal day of observance across the country, he is still commemorated in Washington, D.C in a statue dedicated to the “Father of Arbor Day” in the National Hall of Fame.

In 1976, the Arbor Day Foundation launched its Tree City USA program, that provides direction, assistance and national recognition for its’ designees.  It includes a framework for a healthy, sustainable urban forestry program in communities. The benefits are substantial in educating people about the value of trees and the importance of sustainable tree management while increasing land values.

More than 3,400 USA communities have made the commitment to becoming a Tree City USA. They have achieved Tree City USA status by meeting four core standards of sound urban forestry management: maintaining a tree board or department, having a community tree ordinance, spending at least $2 per capita on urban forestry and celebrating Arbor Day.

The Task Force is honored to have been selected to partner with the Town in support of Arbor Day and would like to thank Russell Tice from the Monroe Parks and Recreation Maintenance Department for the installation and care of the new tree. The public is invited to attend the event, please wear a mask and practice social distancing.

Save Our Stepney Task Force, Incorporated, is organized exclusively for charitable and educational purposes, more specifically to preserve and enhance the character of the village of Stepney, Connecticut, incorporated within the town of Monroe.

The Corporation’s scope of concern will include identifying, documenting, improving and/or preserving historic, cultural and natural properties and features of Stepney. Activities may include public events, education, beautification and cultural enrichment. Community involvement and cooperation with other civic groups and the town of Monroe will be encouraged.