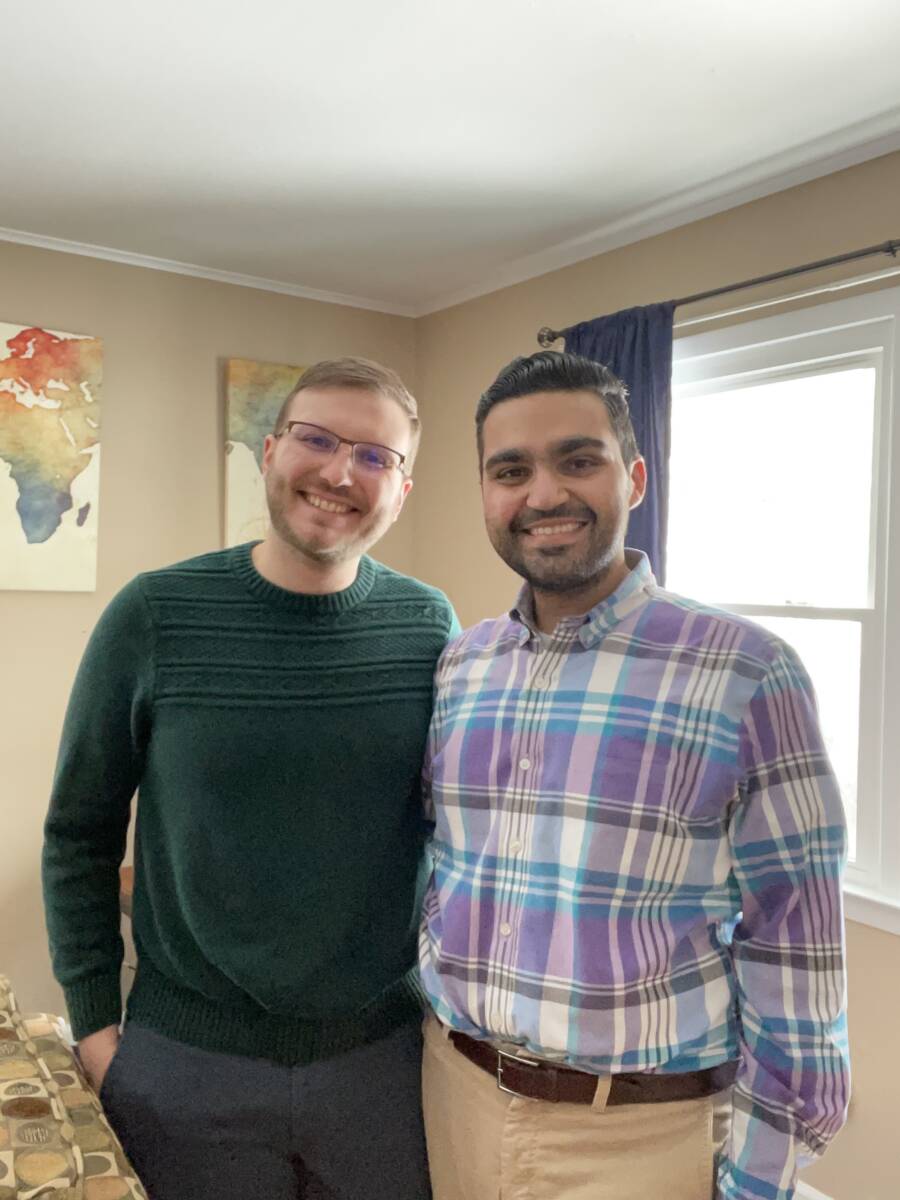 Nick Kapoor, right, at home with his partner, Anthony Agnessanto. Kapoor is running for the 112th District seat in a special election on April 13.

MONROE, CT — As a member of the Monroe Board of Education, Nick Kapoor buys a new pack of Paper Mate color leads mechanical pencils at the beginning of every budget season for his personal notes.

“Green is for questions, blue is comments made during the meeting, red is follow up questions after the meeting, and purple is possible motions to introduce,” Kapoor, 30, said during an interview at his Meadows End Road home Friday.

“I love budgets. It’s one big puzzle and I love problem solving,” said Kapoor, who is a visiting math professor at Fairfield University.

As vice president of operations at his family’s business, I-E Engineering, a Shelton-based company building software systems for insurance companies, Kapoor deals with numbers all day.

If the Democrat is elected as the 112th District’s new state representative in a special election on April 13, Connecticut’s biennial budget of well-over $40 billion will give him all the numbers he can handle.

J.P. Sredzinski resigned as the 112th District’s representative for Monroe and Newtown on Feb. 17, leaving the vacancy. Kapoor is running against Republican candidate, Tony Scott, who serves on the Monroe Town Council.

Kapoor, a Monroe native, owns a house in town with his partner, Anthony Agnessanto, a math teacher for Pomperaug High School in Region 15. They had met on a dating site and started dating in June of 2017.

“Math kind of brought us together,” Kapoor said. “It’s what he does for a living, day in and day out. We have that in common. We have lively debates over math.”

Though Agnessanto is not as into politics, Kapoor said he supports all of his political endeavors.

Growing up in Monroe

Kapoor is a first generation U.S. citizen from his father’s side of the family, but his mother’s roots go all the way back to the 1800s, when her Italian and Polish ancestors emigrated here.

In 1976, Nuval Kapoor, Nick’s father, came to the United States from India in pursuit of the American Dream, when he was 23-years-old. His brother, who worked for Xerox in Norwalk, sponsored him and helped him gain his footing.

The couple raised Nick and his older sister, Leah, in Monroe.

“Growing up in this area and going to school with skin that was a little bit darker than my classmates gave me a different perspective,” Kapoor said, adding, ” I never felt unsafe. I felt accepted. I had an amazing childhood in Monroe.” 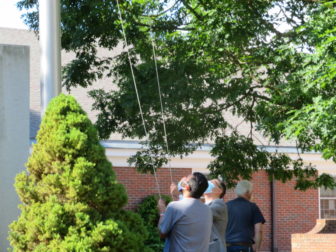 Now Kapoor is out and proud. Last year he approached First Selectman Ken Kellogg to have the Gay Pride Flag flown on the flagpole outside Monroe Town Hall. One of the planks of his campaign for the 112th is civil rights.

“I think one of the reasons why I do what I do locally, and want to go to Hartford to represent Monroe and Newtown, is I want children to be able to have a great childhood — whoever they are,” Kapoor said.

He was appointed as a member of the Connecticut Commission on Human Rights and Opportunities in 2017.

After civil rights, the other five planks of Kapoor’s campaign are education, environment, budget and taxes, infrastructure and transportation, and post COVID.

“We can’t tax Connecticut more. We can’t,” he said of another issue he is passionate about. “Taxes need to be low and fair.” 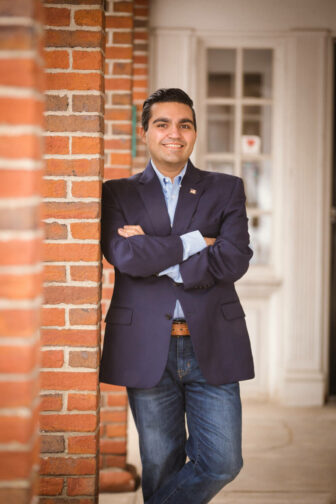 Kapoor graduated as a member of St. Joseph High School’s Class of 2008 and went on to earn his bachelor’s degree from Sacred Heart University in 2011 and his MBA from SHU in 2014. He also earned a Master’s degree in math from Fairfield University in 2018.

It was at Sacred Heart where Kapoor took Dr. Gary Rose’s Intro to American Government class in 2008.

“That class changed everything,” he recalled. “I double majored in poli-sci and math just because of his class. It blew my hair back.”

Of Rose, Kapoor said, “he’s so passionate about what he does and it just rubs off.”

Through his sister, Kapoor was introduced to State Rep. Chris Lyddy (D-106th) and went on to serve as his intern at age 20, helping his constituents in Newtown.

“I was floored. It was indescribable,” Kapoor said of the experience. “I got to talk to Chris about bills and constituents. To see how a state rep could affect change, he was able to have such an impact on his constituents’ lives. It was life changing.”

“The one thing about Chris, I wasn’t just doing errands and making coffee, I was able to be a small part of the process,” Kapoor said. “I was hooked. I knew then that I wanted to be a public servant.”

“I believe that government can be an instrument for good,” he said. “That doesn’t mean big government running everything.”

Kapoor was referring to things like education, environmental regulations and local health departments that ensure food is safe.

“They welcomed me with open arms,” he recalled. “They asked me if I had any interest in running for public office and I said, ‘absolutely,’ and ended up running in 2011.”

Though he would lose his first election for a Monroe Town Council seat, Kapoor went on to be appointed to fill a vacancy on the council, before later being elected as a member of the Board of Education.

Kapoor and his partner enjoy watching Netflix like other couples. Among their favorite shows are “The Crown” and “The Queen’s Gambit.” His all-time favorite movie is, “My Cousin Vinny.” But Kapoor really loves to curl up with a good book.

“Growing up, I was a big reader,” he said. “In my guest room I have a whole wall of books. I really like mysteries. I also really like biographies. I love learning about people in history who fly under the radar.”

“She was the first female cabinet member,” he said. “She was FDR’s secretary of labor. She co-wrote the Social Security Act of 1935. She was one of the unsung heroes, a very powerful woman in the 1930s.”

In high school, Kapoor got hooked on sudoku puzzles and, earlier in life, a poor handwriting grade led to another hobby.

“Anthony and I both knit,” he said. “I got a D- in second grade handwriting on my report card at St. Jude School. My mother’s diagnosis was to improve the dexterity of my fingers and she taught me how to knit.”

“It’s repetitive. It’s my zen,” Kapoor said. “It helped my handwriting. I make socks. It’s kind of my art. I don’t draw or paint.”

A lifelong learner, Kapoor is slowly working toward a Master’s degree in political science. “I really love learning. I really love teaching,” he said. “I love working. I love doing stuff.”

One thought on “Solving Connecticut’s budget puzzle? Kapoor wants to take a crack at it”