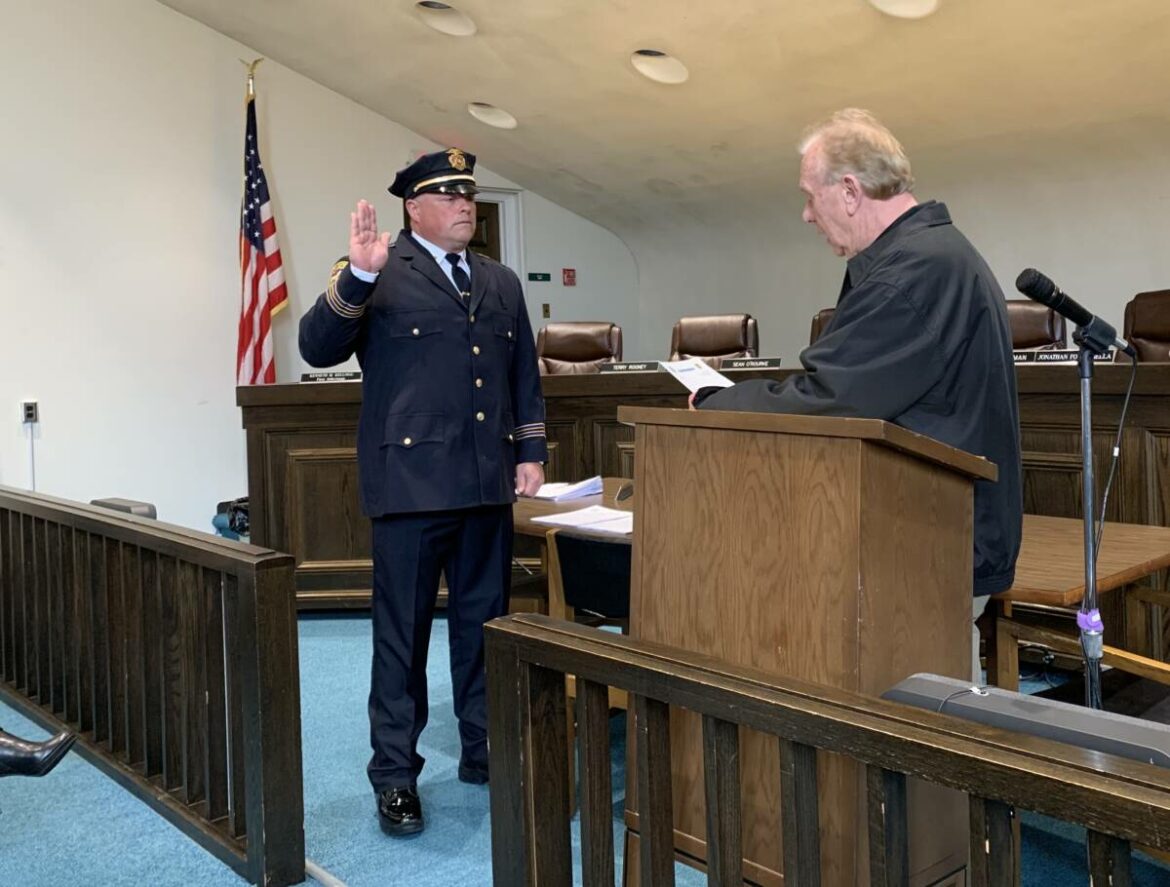 MONROE, CT – Police Chief John Salvatore led the Monroe Police Department for 23 years with steady improvement along the way. Then his retirement earlier this year sparked a chain reaction of promotions from within. Keith White rose from captain to chief and on Friday Lt. Greg Smith was sworn-in as the new captain.

“Captain Smith will strengthen the administration of the police department and work well with Chief White,” he said, “and I wish both of them all the success.”

Dana Smith, right, pins the badge on her husband’s chest during the swearing-in of Lt. Greg Smith as captain Friday.

Smith, 50, and his wife Dana live in Orange, where they raised their three children. Smith’s entire 21-year-career in law enforcement was in Monroe. He was hired as a patrol officer in 2001, was a school resource officer at Masuk High School for five years, was promoted to sergeant, then to lieutenant in 2018.

Smith is also a longtime member of the regional SWAT team.

During his swearing-in ceremony inside the Council Chambers, Smith took the oath of office from Police Commission Chairman Michael A. Vitello and Smith’s wife pinned his badge to his chest.

Greg Smith grew up in Stratford and graduated from Stratford High School in 1990. While there, Smith was a team captain on the soccer team and played baseball. He went on to earn a bachelor’s degree in criminal justice from the University of New Haven and he’s currently pursuing a Master’s in Public Administration from UNH.

Though many who pursue careers in law enforcement grew up with police officers in their immediate family, other than a cousin in Florida, that was not the case for Smith. 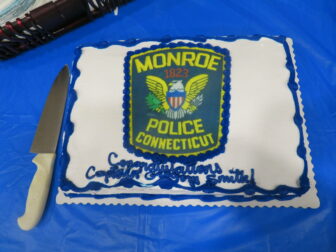 “There is nobody in my family,” he said during an interview in his office Friday. “It’s something I pursued on my own.”

Of being a police officer in Monroe, Smith said, “I like the interaction with the community. It’s a great community to have positive interactions with.”

Within the department, Smith said he enjoys training fellow officers to make them safer in the field. “I believe I’ve made an impact on helping officers reach their personal goals,” he said.

Smith said he enjoyed his time as an SRO at Masuk, where he developed a good relationship with then assistant principal Joseph Kobza, who is now the superintendent.

Working as shift commander while a sergeant is also a good memory for Smith, because he said he was in a position to have the most impact on officers, teaching and mentoring them on a daily basis.

Smith has been a member of the regional SWAT team for nearly 20 years, where he rose through the ranks from operator to team leader to assistant team commander.

After being appointed as a lieutenant in 2018, Smith already knew he wanted to be captain one day. “I always felt I had some leadership abilities,” he said. “I enjoy when people come up to me for help.” 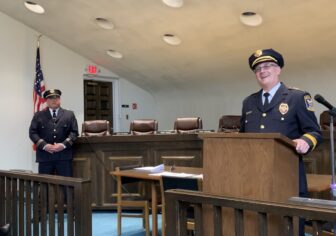 Police Chief Keith White, right, shares a story about Greg Smith, left, at the swearing-in of Smith as captain Friday.

While speaking at the podium Friday, Chief White, who made the decision to promote Smith, shared a story to illustrate one of Smith’s best qualities.

Years ago, when White was a sergeant, a large man was charged with DUI. White tried to get him into the old cellblock, but the prisoner wasn’t cooperating, refusing to remove his belt and shoelaces. Smith was a patrolman at the time, and White sought his assistance.

“He’s actually larger than Greg and I was like, ‘this is gonna end … not well,” White said as laughter filled the room. “So I looked over at Greg and I was like, ‘you know what, I’m really glad he’s here. Not because of his physical stature. He’s got a way with words. He’s always able to express himself well and de-escalate a situation.”

“We didn’t succeed that day, but as we somehow tumbled to the ground, about 30 or so seconds later the gentleman said, ‘I give up. I give up,'” White recalled.

Looking back on the incident, White said he thought, “if we actually were antagonistic in any way it probably could have ended up much worse for both of us.”

White praised Smith’s ability to assess a situation and remain calm as a trait most people don’t have. “I think there’s a real benefit to both myself and all of you, speaking to the department here today,” he said.

The chief also spoke of how Smith is always there for his co-workers. About two weeks ago, White called him at 11 p.m. to ask how someone who was hospitalized was doing. Smith told him he was almost at the hospital to find out and would let him know.

“That’s a big deal,” White said. “That takes a lot of commitment from somebody to get up in the middle of the night and to go check on employees. Employees matter and I think everybody here knows if you have a problem you can reach out, you can find Greg and you can talk to him.”

White said he was honored to bring Smith up to the podium to be sworn-in as Monroe’s new police captain. “I think it’s a great opportunity for him and it’s a bigger opportunity for our department as a whole,” he said. 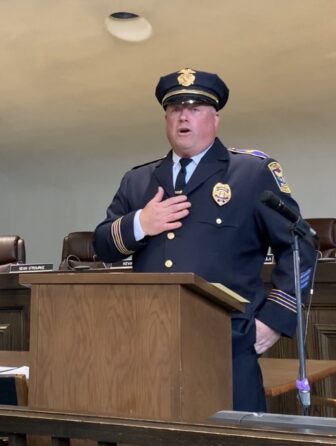 Police Capt. Greg Smith thanks his supporters during his swearing in ceremony at Monroe Town Hall Friday.

Smith was visibly touched by the outpouring of support from fellow officers, family members – especially his wife Dana – and officials who attended the ceremony to celebrate his promotion.

“Thank you so much for coming today. I’m humbled by the presence and all the support in this room,” Smith said from the podium. “In my 21 years, I’ve always tried to make this place a better one for those I work with, tried to make everybody a little safer, a little better.”

Smith said helping fellow officers reach their own career goals and aspirations is among the things that gives him the greatest satisfaction. He added that he takes a lot of pride in seeing officers he supervised directly go on to become sergeants, who “are truly the future of our agency.”

When the day comes for Smith to walk away, he said his ultimate goal is to leave the Monroe Police Department a little better than the way he found it.

“I’m truly humbled and, along with Chief White, I really am looking forward to the future of our department because I think there’s good things to come,” Smith said. 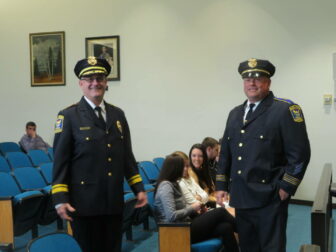 First Selectman Ken Kellogg and Police Commission Chairman Michael A. Vitello are both optimistic about the future of the police department.

“I wish luck to Chief White and Captain Smith and look forward to moving forward with them in the years to come,” Vitello said.

Kellogg said he was pleased to see promotions from within the police department, which now has a lieutenant opening, because it gives officers the opportunity to take on leadership roles.

“Congratulations to Captain Smith,” Kellogg said. “It’s another good day for the town and the Monroe Police Department.”