MONROE, CT — When Tropical Storm Isaias caused massive power outages, Sippin Energy Products was among the state’s propane suppliers powering the generators that helped many families and businesses make it through the long, hot days before electricity was restored.

The Sippins, who are involved in all aspects of the energy business, recently made a $500,000 investment in a 60,000 gallon propane terminal.

“It became evident to us during the power outages just how important this service is,” Gary Sippin told the small crowd that gathered in front of the two tanks for a ribbon cutting ceremony at the facility at 234 Main St. Wednesday morning.

Gary was joined by his son, Eric, and his brothers Mark and David.

First Selectman Ken Kellogg, who wielded a giant pair of scissors, cut the ribbon. He was accompanied by William Holsworth, the town’s community and economic recovery coordinator.

“It’s a big investment,” David Sippin said of the two propane tanks, before thanking town officials who worked with the family-owned energy company, enabling it to be installed on their property in Monroe.

The Sippins also have a real estate business with commercial tenants. Gary thanked the first selectman for all the town has been doing to help retailers and restaurants survive in an economy hurting from the COVID-19 pandemic.

“We’re trying to advocate for businesses in town,” Kellogg said.

The first selectman said it is now easier to pull permits for propane tanks in a faster process. Efforts are also being made to improve other approval processes, as well as regulations to make it easier to do business in Monroe.

Holsworth’s position is a temporary one created by Kellogg to help the town’s economy recover. Holsworth has been helping business owners understand the governor’s executive orders during the pandemic, and educating them on what assistance programs are available. 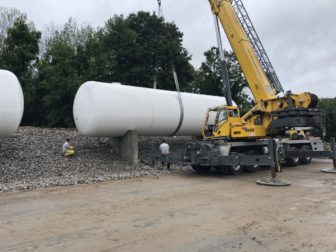 Sippin Energy Products bought the propane tanks from a contractor in New Hampshire and it was delivered by truck, arriving on July 23, 2019. The terminal was completed in January of this year.

The steel pressure tanks weigh 50,000 pounds each. A crane was used to lift the heavy tanks and lower everything into place.

David said Sippin Energy Products has been in the propane business for about four years and currently has over 9,000 customers.

“We always serviced all fuels,” he said. “We sold propane heating systems and water heaters. This is just adding the fuel. It provides a reliable supply for our customers. We provide price protection plans for propane, giving a level of comfort and consistency.”

Among the Sippins’ propane customers is the Aubuchon Hardware store, which recently moved into Bart Center on Main Street, in the space that used to be occupied by Stepney Hardware.

“We installed a propane dispensary system, so they can sell propane for their grills,” David said. It’s a nice partnership. It’s worked out well. They have a beautiful store.”

He said the hardware store’s system should be up and running in a couple of weeks.