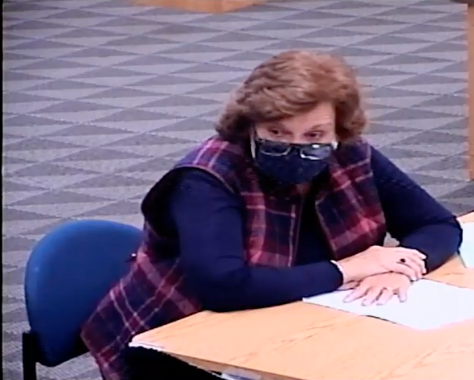 Marie Blake, president of the Monroe Education Association, speaks at Monday's Board of Education meeting.

MONROE, CT — Marie Blake, president of the Monroe Education Association, the teachers union, questioned the Board of Education’s commitment to repaying teachers for three furlough days during the public comment portion of Monday’s board meeting. Then some board members questioned whether their meeting was the appropriate venue for Blake to speak on the topic.

Teachers and members of the school district’s other bargaining units either gave up raises or three furlough days to help the town in a tough budget year.

In the memorandum of understanding the school board agreed to reimburse the employees if state and federal funds leave the district with a surplus at the end of the year. But Blake called attention to instances where savings are already being used for other purposes.

Blake, who appeared at the meeting at Masuk High School in person, told board members she is having buyer’s remorse.

“I know the board has the discretion to spend funds as they see fit,” she said. “I just question how the priority list is made. When will meeting our original contractual obligation become a priority?”

So far this fiscal year, Blake pointed out how the board found savings to pay former superintendent of schools Dr. Jack Zamary in excess of $190,000 to be a consultant, around $92,000 to reinstate student clubs at Jockey Hollow and Masuk, $4,000 for a stipend for a K-5 math coordinator to serve as a consultant, and she asked about the time and compensation for John Battista to help with the transition for Masuk’s new principal and at Central Office.

“I was asked recently if I was going to scrutinize every dollar that the board has spent,” Blake said. “As a town resident. As a teacher, who sacrificed approximately $2,000 for the good of the community, and as the president of the MEA, the answer is yes. Yes, I will be watching how every dollar is spent.”

Shannon Monaco, a Board of Education member attending the meeting by Zoom, said she wondered if it was appropriate for the union president to “be making these questions and demands in this fashion, directly to the Board of Education.”

Monaco questioned whether it amounted to negotiating in public, when the board normally has legal counsel for such discussions.

Dr. Alan Vaglivelo, a board member, said it is very common in school districts for teachers union presidents to address the board in the way Blake had. “It’s free speech,” he said.

“Obviously, anyone can come before the board and speak,” said Vice Chairman George A. King, III. “I don’t think Marie is addressing us in that capacity from what I heard.”

Monaco said it was a question of negotiating in public session, adding she wanted clarity for her own understanding. Acting Superintendent of Schools Joseph Kobza said  he would look into the issue.

“If history matters here, it happened hundreds of times,” said Jerry Stevens, a board member.

King noted how Blake is a Monroe resident, who gave her address before speaking. But he suggested waiting for Kobza to figure it out.

“It’s public participation. Marie is a resident,” said David Ferris, a board member. “She can certainly come up here and we will listen, but this is three meetings in a row as the union president pushing union issues, and I was also sitting here wondering, ‘is she negotiating? Is this the proper venue for this?'”

Ferris said union concerns should go to the superintendent in case there’s a grievance later on.

“So it’s just the venue,” he said. “It’s not that we want to shut anyone off. Certainly not. Anyone can speak, it’s a little different when you’re wearing the hat of the MEA president and everything she’s brought to us the last three meetings is a union agenda.”

Vaglivelo said he did not believe the board could restrict someone’s free speech based on their role and Stevens said he believes Blake should be able to come to the board with any concerns.

At one point, Vaglivelo said, “so we shouldn’t allow anyone to ask questions anymore?”

Monaco replied that it is about negotiating in a public forum. “I am not advocating silencing anyone,” she said.

“Absolutely, this is the forum,” said Nick Kapoor, a board member, adding if he were a union member, he would want the elected leadership to be active and vocal. Kapoor said the MEA president should be able to speak on any issue in the meetings, which are part of the public record.

Monaco reiterated that she wants Kobza to look into it and recommend guidelines.

From the times Blake had spoken, Ferris said he is under the impression the union does not think the Board of Education will honor the memorandum of agreement.

“Marie, as far as I’m concerned, we’ll honor the MOU if the conditions of the MOU are met at the end of this year,” Ferris said to Blake. “We signed it and we’ll honor it.”

“Now I think that’s negotiating,” Kapoor said, noting how, if someone raises an issue such as a lawsuit in the public comment portion, board members do not respond and openly discuss what was said.