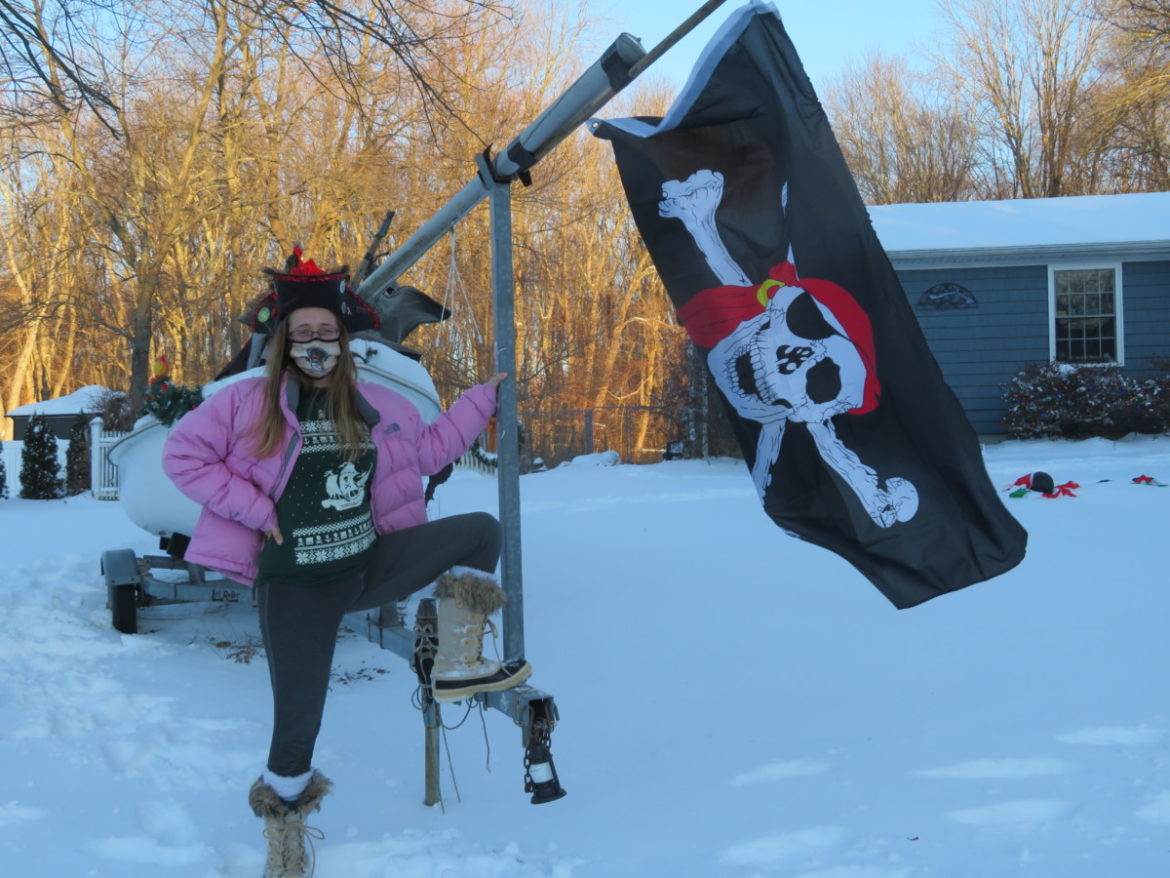 Jennifer Palmieri plans to fight to keep her pirate ship decoration in the front yard of her Oak Wood Drive home.

MONROE, CT — A black flag with a skull and crossbones flies from a 20-foot-sailboat on Jennifer Palmieri’s lawn at 35 Oak Wood Drive, and the skeletal captain is wearing a Santa hat for the season.

Children riding in school buses and other passersby have enjoyed seeing the “pirate ship” over the years but, to at least one neighbor, it has become an eyesore. A complaint was filed with the town and Palmieri received a citation ordering her to move the boat to the side or back of her home.

But Palmieri vows to fight the action. She will ask Zoning Enforcement Officer Joseph Chapman for a hearing to contest the action. Palmieri also started a Facebook page called “Save the Monroe Pirate Ship,” a public group that has gotten 276 supportive members — almost overnight.

“I plan to fight this in a public hearing,” Palmieri said during an interview at her home Friday. “As cliche as it is to say, a captain goes down with his ship. I don’t fly a pirate flag to give up on a fight.”

If Palmieri does not move the boat, she will be fined $150 for each day the zoning violation occurs, according to the citation. Chapman cites a violation of Article 3, Section 8 of the zoning regulations that says:

Recreational vehicles or boats may be parked or stored on the premises, provided they are suitably screened and kept at least one-hundred (100) feet from the property line. Screening shall consist of dense foliage completely obscuring sight of the vehicle or boat from the road and adjoining properties, or a solid fence or similar enclosure equal to the height of the vehicle or boat.

“It’s a local regulation,” Chapman said Friday. “It’s no different than the regulation about parking cars in a yard. The fact that it’s decorated as a pirate ship, is not the point. The point is there’s a boat in the front yard.” 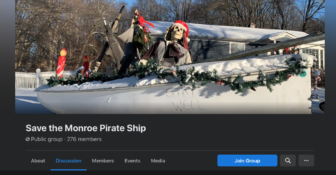 Jennifer Palmieri started a public group on Facebook called “Save the Monroe Pirate Ship” on Thursday evening and it had 276 members by Sunday night.

“If she displayed it on a holiday, then pulled it back, I think most people could live with that,” he said. “But the fact that it sits there all year, it can start to annoy people.”

But Palmieri said she sees boats in front yards all over town, so it feels like she’s being singled out for selective enforcement.

“I believe I’m being bullied by one neighbor,” she said. “There are boats rotting away in people’s yards and tractors decorated for the holidays. I’m not trying to cause problems for them, but it feels like I’m being singled out.”

Palmieri does not know who made the complaint against her and Chapman said it’s not typical for the town to identify someone who files a complaint.

Whoever it is, had apparently made a complaint to the town before.

In an email to Palmieri on April 9, 2018, Chapman told her how the man originally complained about another property on their street, then turned his attention to her property at 35 Oak Wood Drive:

I can tell you that an initial complaint came into the Selectman’s office about the conditions at 32 Oak Wood which have since been resolved. I do not have the name of the same neighbor on Oak Wood who brought #32 to our attention but he stopped in last week to thank us for resolving that particular issue.

At that time he asked if there’s something that could be done about the boat and furniture which in his eyes is not attractive or an asset so apparently not everyone loves it.

The furniture was in reference to items Palmieri left on her curb for pickup in the town’s bulk waste program. That is no longer an issue.

“Our office typically responds to complaints, I usually urge the neighbors to resolve issues between themselves before involving the Town and Regulation Enforcement,” Chapman wrote to Palmieri. “I suspect we could have an interesting discussion on ‘beauty in the eye of the beholder’ perhaps that will come to pass.”

Palmieri said her neighbor never approached her to try to work something out.

Chapman asked Palmieri for voluntary compliance, but promised enforcement action would be taken if the town received another complaint.

Things were quiet for about two years, before the neighbor filed another complaint, this time to the First Selectman’s Office, which forwarded it to land use, and the town slapped Palmieri with the citation.

On Friday, First Selectman Ken Kellogg said he asked Town Attorney Frank Lieto to look into the issue. He said the complaint will go through the process, as all complaints do.

Palmieri noted how the citation was not delivered by certified mail or hand delivered as outlined in Chapter 505-2 of Zoning Penalties in Monroe’s regulations, and that it is unsigned.

Palmieri has within 10 days of receiving the citation to request a hearing if she wants to. The citation says that’s Nov. 14, 2020. But she said the date of issuance was not until Nov. 30, 2020, the postage on the envelop was Dec. 2 and she actually received it on Dec. 4.

Palmieri said Town Planner Rick Schultz told her he will call her this week to answer any questions she has about the process.

History of the ‘pirate ship’ 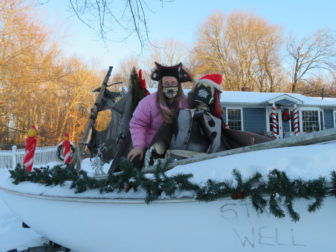 Jennifer Palmieri wears her pirate hat, while seated in the sailboat, decorated as a pirate ship, in the front yard of her Oak Wood Drive home.

Palmieri grew up in town and has been a para-educator for the school district for 15 years. She currently works at Fawn Hollow Elementary School.

“I give students pirate stickers. They’re not violent. They’re fun,” she said of pirates, adding she always wears her pirate hat.

“It probably started with ‘The Little Mermaid,” then ‘Pirates of the Caribbean,'” Palmieri said of movies that sparked her love of pirates. “I dove into it. I studied female pirates.”

When friends and family see pirate-themed things, such as Christmas ornaments, they often give it to her, Palmieri said, holding up an ornament.

The ranch-style house Palmieri and her son, Jaiden, 8, live in has been in her family for over 60 years, dating back to when her grandparents bought it. Then Palmieri’s mother owned the house. When she was stricken with cancer, Palmieri moved in to care for her. Palmieri has owned the house since her mother died in 2014.

That’s when she started decorating a boat with a pirate theme in her front yard. For two years, Palmieri decorated a duck boat, dressing up a plastic skeleton as the pirate captain. She never named him, but over the years people have called him Johnny, Roger and Jerry.

Palmieri decorates him for different holidays and seasons. 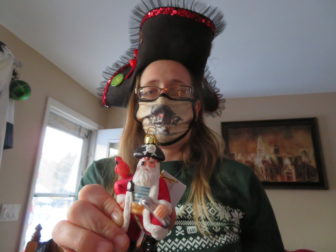 “On Veterans Day, Memorial Day and the Fourth of July he’s red, white and blue,” she said. “I put little flags in his hands. In the spring and summer he’s adorned with beautiful flowers and things I grow in my garden. This year, he had cornstalks.”

About five years ago, a neighbor who was moving gave Palmieri his sailboat and trailer as a gift, which is the boat on display today — without the sails up. She has never used it for recreation.

“I have no intention of going out onto the water,” Palmieri said. “It’s for decoration purposes only. I may love pirates and the pirate lifestyle, but I’m not seaworthy.” 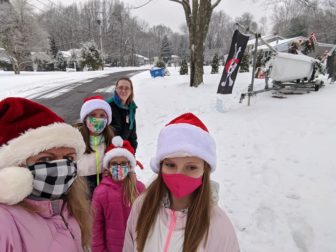 Jennifer Palmieri says her pirate ship decoration is a big hit with children and people often pose by it for pictures.

Palmieri said truckers often drive by her house and hoot and holler, “We love the pirate!” And an Eversource employee recently complimented her on the decoration when he was responding to a storm.

“She said, ‘I saw the boat and now I know why,'” Palmieri said the mother told her, while recalling her child’s excitement over the “pirate ship.”

“It’s disappointing, because it brings more joy to people than it doesn’t,” Palmieri said of the controversy over her boat. “People stop to pose for pictures.”

Jaiden said he and his friends always pose for pictures by the boat before trick-or-treating. “It’s been here for a few years and it’s our property,” Jaiden said.

While Palmieri doesn’t know the identity of the neighbor who filed the complaint, she does know of others who like her “pirate ship,” including a woman next door who loves to garden and talked to her about about using plantings to make it look like the boat is emerging from the weeds.

When Palmieri shoveled snow from her driveway late Friday afternoon, she was approached by Sarah Jordan, who lives in the house directly across the street from her.

“We love it,” Jordan said. “When we give directions to our house, we tell them we’re across from the pirate ship. My two-year-old son, Jacob, waves to the pirate every morning when we get into the car.”

Jordan and her husband, Matt, moved into the neighborhood in 2017.

“The pirate ship was here when we moved in,” she said. “My husband said it’s a selling point. It gives our neighborhood character.”

Of the zoning dispute, Jordan said she thinks the neighbor who complained should talk to Palmieri. “She’s such a wonderful neighbor,” Jordan said. “I don’t think taking it down is a reasonable request, but she would talk to them.”

“I lived 34 years of my life in this house and never had any complaints,” Palmieri said. “I had no issues at all with my neighbors. I’m an easy going and reasonable person. I feel I can be approached by anyone. Would I move it? Not necessarily, but I’d be willing to discuss it and its importance to me and the entire community.”

6 thoughts on “Shot across the bow: Battle over a ‘pirate ship’ breaks out on Oak Wood Drive”