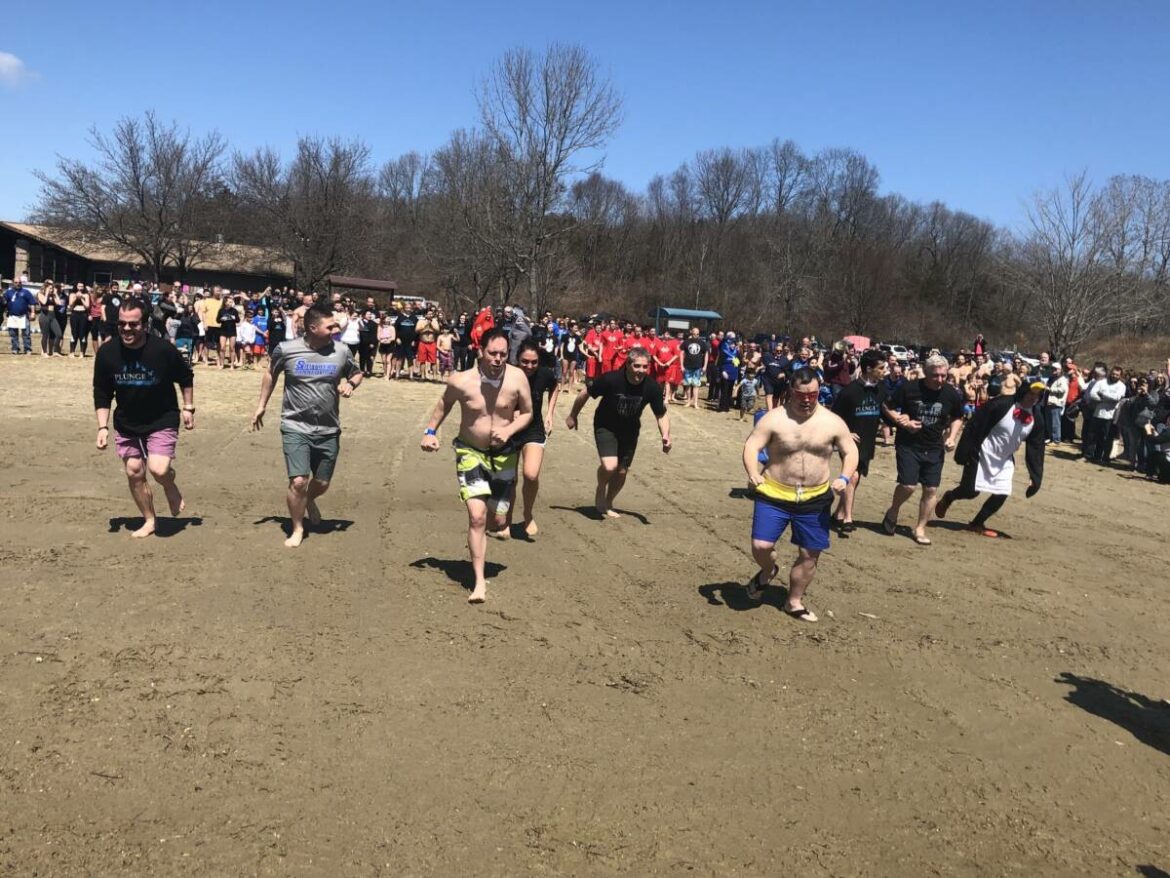 ... and they're off! Special Olympics Connecticut athletes run toward the icy water.

MONROE, CT – Police Sgt. Pete Howard, known by many for his involvement with the annual Plunge at the Park, plans to retire this spring after 27 years of service to the town. The plunge, which had a two year hiatus during to the pandemic, is coming back to Great Hollow Lake on April 2 – and Howard hopes it will be the most successful one yet.

He remembers watching a presentation on polar plunges throughout the state, while attending a Special Olympics Connecticut breakfast 12 years ago, and thinking of how Monroe could host its own at the lake on the beach side of Wolfe Park.

“We started small,” he said. “We had 25 people go into the water for our first Plunge at the Park.” 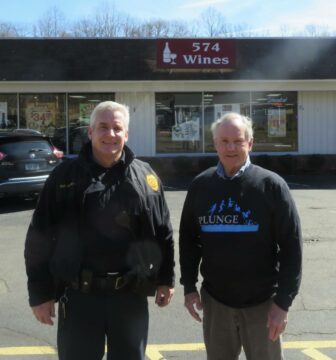 Police Sgt. Pete Howard, left, will run into the icy waters of Great Hollow Lake with Ty Nicholson, right, manager of 574 Wines, during The Plunge at the Park on April 2. That day, 574 Wines will donate 10 percent of its sales to Special Olympics Connecticut.

But Howard said the event has since grown to be the Monroe Police Department’s biggest fundraiser for the Special Olympics.

“The last time we had just under 100 people in the water and probably another 200 viewing the event,” Howard said of the 2019 plunge.

The event starts with an egg toss and a K-9 demonstration before the plunge at 1 p.m.

Howard and Christine, his wife of 40 years, have three grown children, including their son Christopher who lives in Stratford with his wife Sarah, son Max, who lives in Norwalk with his fiancée Nicole, and daughter Tess, who lives in Raleigh, N.C.

Both of the Howards’ sons will be running into the water on April 2.

“I have quite a large family contingent that shows up – nieces and nephews – we look forward to it,” Howard said. “It’s a family, community event.”

Howard grew up in Fairfield and graduated from Roger Ludlowe High School. When he was older he took an emergency medical technician course in Monroe and went on to join the Monroe Volunteer Emergency Medical Service, while going to the police academy.

Howard’s entire law enforcement career has been in Monroe.

“I was a youth detective for 12 years,” he said. “It was a great time, a lot of working with the kids with great programs. We got an explorer post up-and-running and started internet safety programs.”

Howard and his wife moved to Monroe 23 years ago. When he retires, Howard said he will miss the town and its people.

“It’s been rewarding,” he said of being a police officer. “My focus all along was on trying to help the kids out.”

When he was a rookie, a retired officer, Sgt. Harry Green, told Howard how he spent his career trying to keep kids out of trouble. “It made sense to me,” Howard recalled. 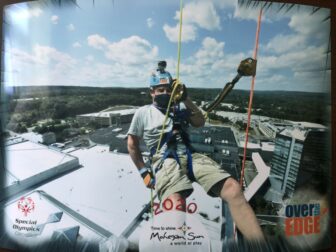 Monroe Police Sgt. Pete Howard rappels down all 34 stories of the Mohegan Sun building in Uncasville.

The Monroe Police Department always did the Torch Run for the Special Olympics and when Howard joined the force he got involved.

Other police fundraisers for the Special Olympics include A Cop-On-Top and Tip-A-Cop events, which first held at Señor Panchos. “They actually had a golf tournament one year,” Howard said.

In 2020, Howard wore a helmet and harness, while rappelling down all 34 stories of the Mohegan Sun building in Uncasville for the Over the Edge fundraiser for Special Olympics Connecticut.

Howard visited 574 Wines, 574 Monroe Turnpike, Tuesday morning. On April 2, the store will donate 10 percent of its sales to Special Olympics Connecticut on behalf of the Monroe Police Department.

The store manager, Ty Nicholson, will also run alongside Howard that day, taking a plunge into the frigid water.

“I have never done it,” Nicholson said. “I have no nerves. I just hope I have a warm blanket waiting for me.”

The liquor store ran a similar promotion on its anniversary last year, raising $1,000 for Special Olympics Connecticut through the Monroe Police Department. On April 2, all purchases during store hours, 10 a.m. to 8:30 p.m., will benefit the SOCT.

“I appreciate all of the businesses that have supported the Special Olympics 0ver the years, because it supports the athletes and pays for equipment and programs,” Howard said.

For example, the Unified Sports programs at Masuk and other high schools support Special Olympics Connecticut’s spirit of acceptance and inclusion, according to Howard.

Among the biggest supporters of Monroe police officers’ fundraising efforts are:

“It’s not too late,” Howard said. “Any business that wants to support us can email me at [email protected]”

Information on being a sponsor can be found by following this link. To participate in the Plunge at the Park as a team or individual, click here.

Though this is the last Plunge Howard will organize as a member of the police department, he said he plans to continue volunteering for the annual event so long as he lives in town.