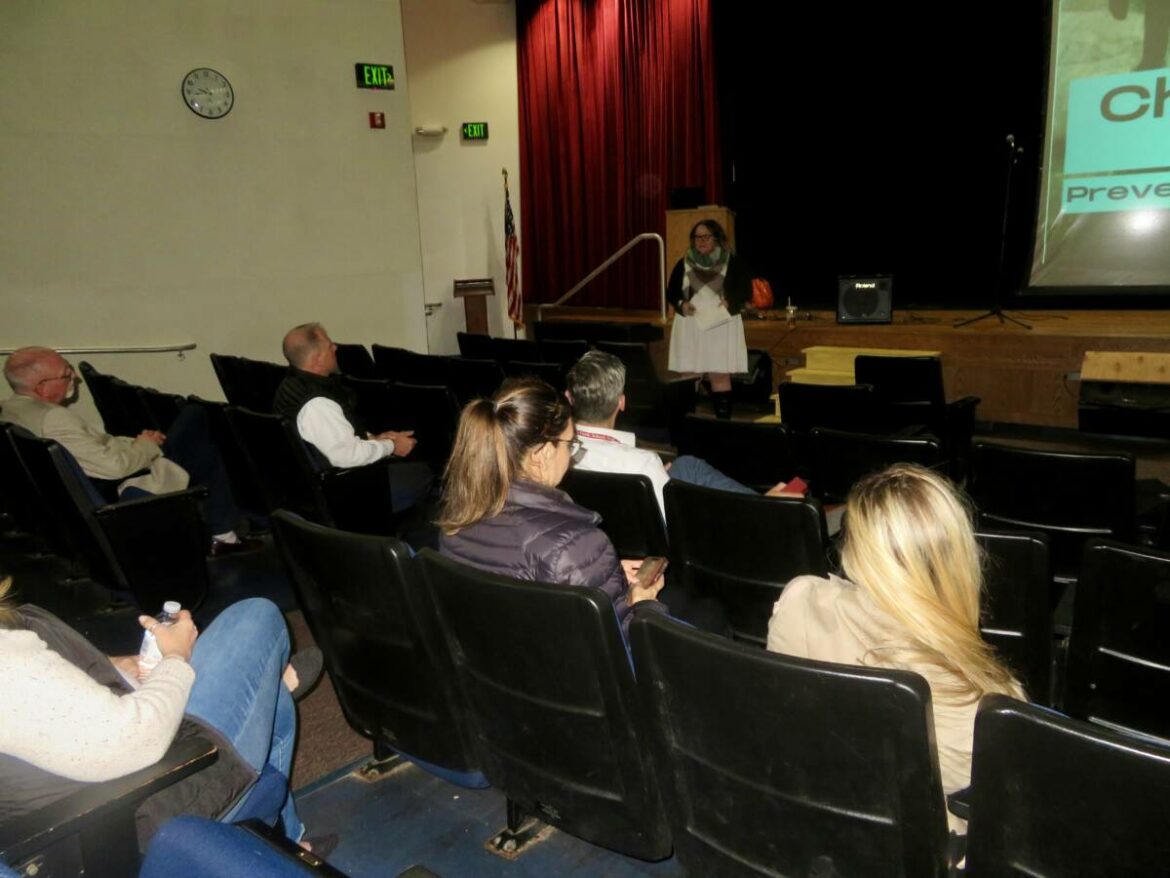 Amanda Posila, director of education and community engagement for The Center for Family Justice, gives a presentation on child sexual abuse and trafficking during a recent event at Jockey Hollow Middle School.

MONROE, CT — Hearing the term child sex trafficking may conjure up images of a stranger grabbing a girl off the street, throwing her in a van and driving off, but Monroe Police Det. Nicole Buckley says it’s simply defined as any sexual act in exchange for something of value.

“Sex trafficking is happening here in Monroe,” she said. “We have kids trafficking their friends for alcohol or money.”

Buckley said there are men in the Fairfield County area who communicate with teens via Snapchat or text message, offering to provide alcohol for underage parties in exchange for sexual favors.

Other times, minors may share sexual photos of themselves in exchange for something of value, like new clothes or an iPhone, according to Buckley.

She shared this information during a Child Abuse Awareness event at Jockey Hollow Middle School last week. The event, hosted by the Monroe Police Department and The Center for Family Justice, featured discussions on warning signs, misconceptions and prevention of child abuse, child sexual abuse and trafficking.

Kathy Maiolo of Monroe, chair of CFJ’s board of directors, also attended the event with other representatives. Prior to the discussion, Amanda Posila, director of education and community engagement for CFJ, gave a presentation.

“Ultimately, our goal is to end domestic violence and sexual abuse in our communities,” Posila said. Communities cannot eliminate sexual violence or child abuse unless people believe in the programs for prevention, she added.

In the U.S., the average age of entry into sex trafficking is 13-years-old, but Posila knows of cases with children as young as nine. Oftentimes, victims are runaways, making them more vulnerable.

Among the ways to prevent children from falling victim is to promote “a favorable sense of self, concern for how one’s actions affect others, connection and commitment to school, community support and connectedness to the community,” Posila said.

An “intrinsic sense that all of their identities are valid and important, having a trusted adult mentor and emotional expressiveness,” are other positive factors cited.

One statistic shared by Posila is that one-in-six boys and one-in-four girls experience some sort of sexual abuse before they turn 18.

Young children are often taught the phrase “stranger danger”, so they are not too trusting of adults they don’t know. While that is important, Posila notes that children know their abuser in 95 percent of cases.

She said parents should be more nuanced in conversations with their children, telling them how it is wrong for anyone to touch them in a way that’s not safe.

While learning about “good touch” and “bad touch”, young children also need to know there are distinctions. For instance, even if they might feel uncomfortable, it is okay for a parent to bathe them or a doctor to conduct an exam, Posila said.

Parents should have age appropriate conversations about consent and boundaries, according to Posila. “We should respect people’s boundaries,” she said. “You can’t take no response as consent.”

Oftentimes, Posila said children know what behavior is inappropriate, but an adult in a position of trust, such as a priest or a coach, can make it seem normal.

“Kids are very knowledgable about things that are uncomfortable, but then an adult says it’s okay and how you show affection,” she said.

The vast majority of adult child sex offenders are male and as many as 40 percent of child sex abuse is perpetrated by older more powerful children.

Pedophiles’ primary sexual attraction is toward children and 65 percent of all child abuse cases are perpetrated by adults who are characterized as molesters. Molesters also have seemingly normal sexual relationships with other adults.

Pedophiles usually have a hard time connecting with adults and act childlike or have previous convictions, according to Posil’s presentation.

Skilled pedophiles often go under the radar. They look for vulnerabilities in families. When a babysitter is needed they will say, “I’ll take care of your kids. No problem.” While most people are safe, Posila said parents should be wary of those who are more eager to help.

Sexual predators of children often use grooming to gain trust and access to a child. Posila said a pedophile may play wrestle with a child and touch a private part to see how the child reacts and how far he can go.

Parents should look for warning signs of abuse in the behavior of their children. Some examples, though it may not necessarily mean sexual abuse, could be cutting, acting out in school, becoming withdrawn, reverting to earlier childhood behavior like bed wetting, and exhibiting cold but regressive behavior.

Posila said sometimes there are no warning signs, because kids don’t think anything wrong is happening.

Her presentation included Seven Steps to Protect: “Learn the facts and understand the risks, minimize the opportunity, talk about abuse/break barriers, stay alert, make a plan, act on suspicions, get involved.”

Posila said only about five percent of reports are false. Yet one-in-three adults would not believe a child if they disclosed sexual abuse, according to the Australian Childhood Foundation.

“We’ll believe survivors when they come forward and let the police investigate,” she said.

If a child opens up, Posila said the parents or guardians should use their “best pokerface”, stay calm and listen. “You don’t have to ask for every detail to have enough to get help for the child,” she said.

Kayte Cwikla-Masas, director of youth and adult services for CFJ, said she does about 120 forensic interviews and 180 referrals a year. However, high rates of sexual abuse cases are not reported.

In some cases, memories of abuse can be repressed, before something triggers recovery of the memories later in life. In 2020, Connecticut legislators recognized that fact and lifted the statute of limitations for child sexual abuse.

Buckley said some of the cases she investigates are already six-to-eight years old.

“It’s much more difficult to investigate, but we can gather as much information as we can and corroborate as much as possible,” she said. “It’s definitely easier if it happens today and is reported immediately.”