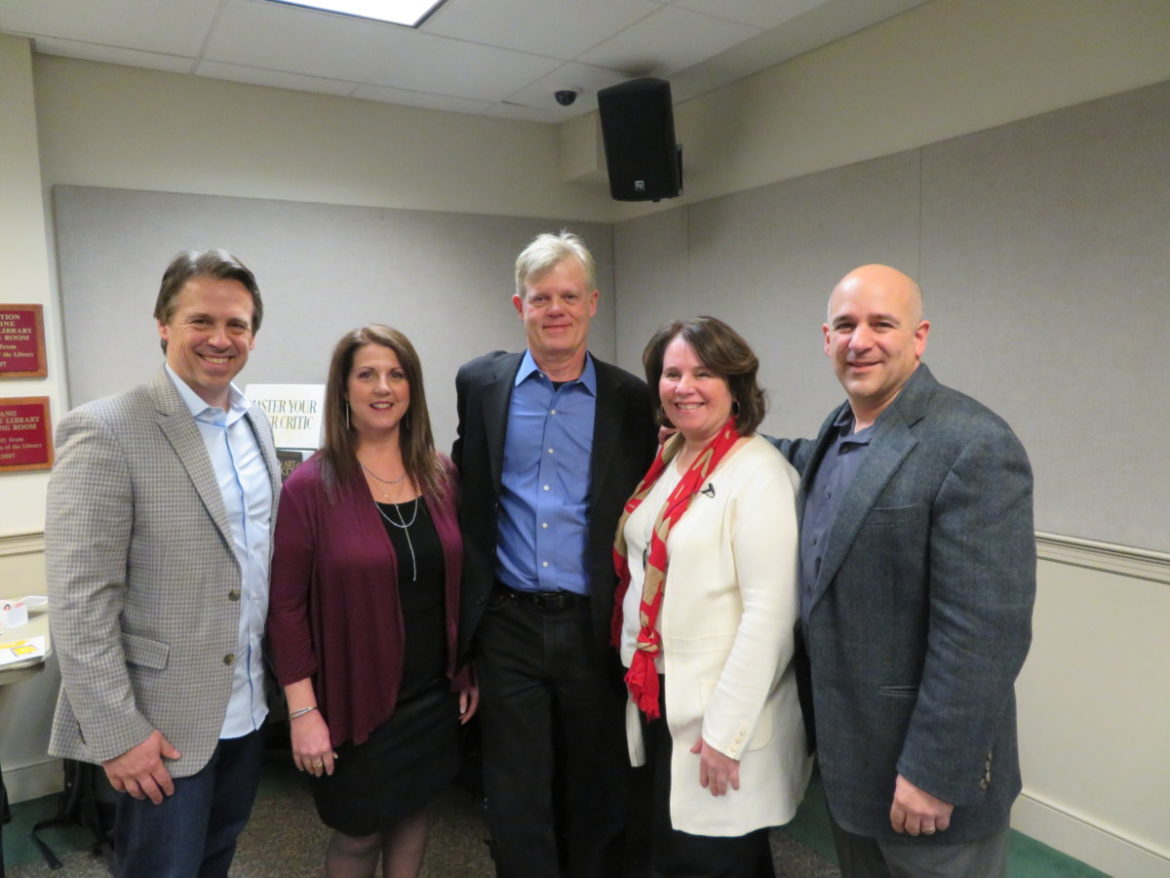 Social media offers a variety of ways for businesses to connect with clients, from email to Facebook and LinkedIn to Instagram. But Beth Stoller, founder of At The Podium, says there’s no substitute for a live face-to-face connection.

Stoller, a board member for the Power Network, organized an event with the Monroe Chamber of Commerce and SCORE at Edith Wheeler Memorial Library Wednesday night, featuring a lineup of accomplished public speakers, who gave advice on marketing and sales.

“There’s nothing better than a knowledgeable speaker connecting with their audience,” Stoller said.

Power Network is a leads group sponsored by the Monroe and Newtown chambers of commerce. Wednesday’s event was the first in the speaker series for 2020. The panel included:

Christopher Salem, CEO of CRS Group Holdings, LLC, who mentors and consults with entrepreneurs, business leaders, sales professionals and companies to build and protect their brands. He co-authored the recent edition of the book, “Mastering the Art of Success” with Jack Canfield. His weekly radio show Sustainable Success is part of the Voice America Influencers Channel.

Oscar Romero, founder and president of Oscar Romero Speaks, is known as ShyGuyNoMore. His mission is to “provide solutions for shy or socially anxious people to approach professional and social situations confidently to realize their dreams.”

Wednesday’s event was a preview for Selling from Influence The Workshop, an event scheduled for Saturday, March 14, at Brio Tuscan Grille at Danbury Fair Mall, 7 Backus Ave., Danbury, from 9 a.m. to 5 p.m.

The $197 per person admission includes the workshop and meals. Registration is online.

Close to 65 business professionals attended Wednesday’s event in the Ehlers Meeting Room of Edith Wheeler Memorial Library. Tables in the back of the room had finger sandwiches, cookies and fruit and the panelists sat in a row of chairs in front of the room, taking turns with the microphone.

Each speaker gave a 10 minute talk before a question and answer period at the end.

Moore offered her opinions on social media, saying Google is a growing machine that keeps requiring more information from users, while the social platform Instagram has become a friendlier place than Facebook.

She said email is still the best way to connect with clients, because you can track who is opening your messages to determine who is interested in what you have to offer. She recommends Constant Contact.

Moore also encourages business owners to take the time to look back and assess how their sales and marketing efforts are doing to determine what is most effective.

Kotulich has a background in psychology. She recommends setting up your pitch to the four types of people you will encounter to improve your chance of making a connection.

Kotulich studied the DISC profiles. DISC stands for dominant, influential, steady and conscientious. She said everyone has some of these traits, but usually one is stronger.

A dominant personality is not as trustful, according to Kotulich. She said you have one shot to make a positive impression.

An influential personality prefers to buy rather than be sold to.

A steady personality will have to think about your offer overnight, rather than making a snap decision on the spot.

A conscientious personality is detail oriented and will need to see the offer frontwards and backwards, usually seeking more information on their own before making a decision.

An emotional pitch will be more effective to the influential and steady personalities, while a straight forward approach will work better with a dominant and conscientious personality, according to Kotulich.

What is your passion? 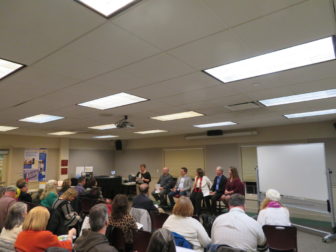 A Realtor can show a great track record of making transactions happen, but potential clients wanting to sell their home won’t care about any of that, according to Salem.

“Why would I pick Brian?” Salem asked, using an example of a Realtor in the room. “Say I know he’s family oriented and goes to church. Say he has the same values I do. I’m going to identify with that and feel comfortable with him.”

Rather than concentrating on what they do, Salem told audience members to think about why they do what they do and what is most important to them.

“What are your core principles and values?” Salem said.

In the Realtor example, Salem said there could be 10,000 Realtors in a 60-mile-radius, adding someone would choose you based on your values, which are what make you unique.

If a client asks you for help on something where you know someone who will be better, he suggests making a referral so you become a trusted advisor.

Salem also said to work on your self-confidence and master your inner critic to exude a positive energy to potential clients.

“If you have a beautiful home on a shaky foundation, it’s going to crumble down,” he said. “But if you build a strong foundation with your core values and principles and raise your confidence, people are going to trust you.”

Salem also said to live in the moment. Rather than listening to your inner critic and recalling negative childhood experiences and fearing the impact on your future, concentrate on the task at hand.

The slogan for Tom Martin’s public relations business is “connect, communicate, change the world.” Among his clients are authors seeking media coverage for their books.

Through his experience as a journalist, Martin said your audience is always asking the question, “what’s in it for me?”

“You can have hope and confidence that you can get your story in the media,” Martin said. “It’s through integrity and letting people know what you stand for.”

He recommends writing press releases and emailing them to media outlets that would have an interest in the topic, casting a wide net.

On “changing the world,” Martin said everyone has charitable causes they support. By hosting an event benefitting a cause like Habitat for Humanity, he said you can make a positive difference and people will know what you’re about. 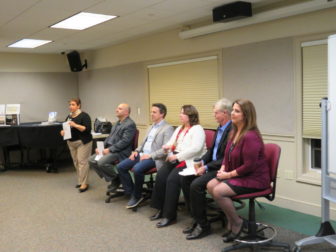 Romero said anxiety can feel like “a cold wind freezing you in your tracks,” leading to your inner critic holding you back from asking someone out on a date or not pursuing a client you want to attract.

“I was shy, but thanks to life experiences, mentors and friends I shed it,” Romero said. “I am shy guy no more.”

He recalled an accident he had, wiping out while attempting his first 45 meter ski jump during a competition in New Hampshire in 1989.

“I turned to my coach and said, ‘I don’t think I can jump again,'” Romero recalled. “He said, ‘that was a fluke. You have to dust yourself off and jump again.'”

Applying that lesson to business, Romero said he was doing inside sales and ended up doing outside sales, going door to door. Doors sometimes slammed in his face, but he said it got easier the more he did it.

Things that helped him build his confidence were writing down his values, doing visualization exercises before a business interaction, and role playing with friends, family or a trusted advisor to fine tune his sales pitch.