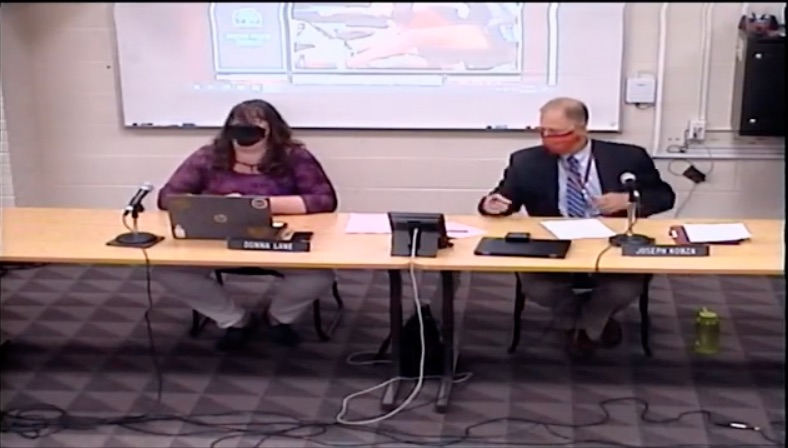 Board of Education Chairwoman Donna Lane, left, shares changes to the board's letter policy during Monday's meeting, as Superintendent of Schools Joseph Kobza looks on.

MONROE, CT — Citizens unable to attend Board of Education meetings once had the option of submitting a letter for the chair to read aloud, so their voices could be heard during the proceedings, until recently.

Though letters will not be read aloud, the Board of Education will still accept letters from the public. Chairwoman Donna Lane explained the new policy at Monday’s meeting.

“Last week we had some discussion regarding public participation, specifically around the reading of letters,” Lane said. “So just to reiterate, what we discussed within those last two weeks are, moving forward any letters that come into the board will be distributed to all the board members and be made part of the public record and posted on our website, along with the meeting minutes. But moving forward we will not be reading letters at our Board of Education meetings anymore.”

A controversial proposal by board member Nick Kapoor to adopt a new transgender policy attracted passionate letters on both sides of the issue, taking up significant portions of recent meetings when Lane read each one aloud.

Vice Chairman George A. King III had noted the unfairness of speakers attending meetings in person being limited to three minutes, while a letter read into the record could last up to 15 minutes.

David Ferris, another board member, said controversial issues with a significant number letters could hold up meetings for long periods of time.