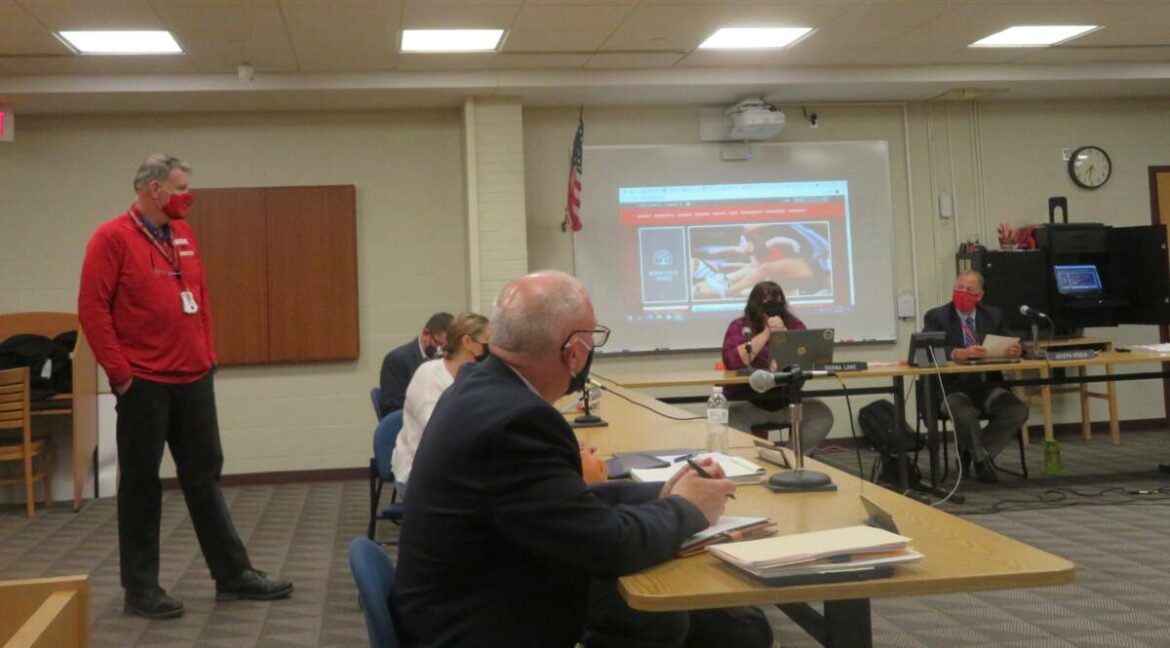 Superintendent of Schools Joseph Kobza, right, honors 2022 Teacher of the Year William "Bill" McDonough, standing to the left, at the Board of Education meeting Monday.

MONROE, CT — A Masuk High School graduate, who now studies computer science at the University of Massachusetts, says she owes it all to her former teacher, William “Bill” McDonough, Monroe’s 2022 Teacher of the Year.

In her nomination of McDonough, the student recalled her first day in his computer science class at Masuk, looking around the classroom while thinking, “this is so not my thing. It’s all boys. I’m gonna feel left out. I need to drop this class.”

She approached her counselor to drop the class, but then McDonough told her to give it a chance.

“Looking back, I’m so glad I did, because I would have missed out on a lot had I not,” she said. “With his support and constant motivation, not only was there a spark of interest in the field of computer study, but I gained a lot of confidence when working in a mostly male dominated field.”

Superintendent of Schools Joseph Kobza shared that story while recognizing McDonough as Teacher of the Year during Monday night’s Board of Education meeting. It was an illustration of the positive ways McDonough touches the lives of his students.

“It’s a pleasure for me to introduce Bill as we recognize him as our 2022 Teacher of the Year,” Kobza said.

McDonough’s teaching career began as a math teacher at Masuk in 1993. Then around 2005, he started working in Masuk’s Career and Technology Education Department as a computer science teacher.

Kobza said McDonough “pretty much started our computer science program,” having written the curriculum for all of Masuk’s computer courses, including computer science, programming, engineering, robotics and gaming, and two Advanced Placement courses.

“Bill completes and manages the Perkins grant every year for us, helping us to use the funds to buy state-of-the-art equipment for the entire CTE Department,” Kobza said. “He is the past president and current treasurer of the Connecticut Technology Engineering Educators Association.”

“He also started Masuk’s VEX Robotics team about a decade ago, and had made it one of the premier clubs, not just at Masuk, but throughout the state, region and nation,” Kobza said. “As one parent mentioned in her nomination, ‘when Masuk arrives at a competition, all schools start to buzz that the best team around has arrived.'”

Masuk’s robotics team currently has 102 students, who meet “practically year round” with three two-hour work sessions a week and eight to 12 competitions per year, followed by state, regional and national events at the end of the year, according to Kobza. 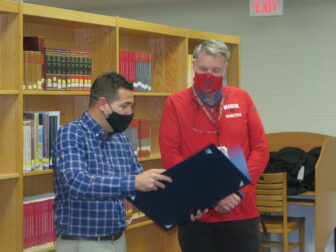 State Rep. Tony Scott, R-Monroe, left, presents a citation to 2022 Teacher of the Year William “Bill” McDonough at the Board of Education meeting Monday night.

“Congratulations on your teacher of the year award,” Scott said. “While my kids are in seventh grade in Jockey Hollow, I look forward to them being able to have the experience of either being on the robotics team or having you as a teacher in the next coming years.”

“We couldn’t be prouder,” Chairwoman Donna Lane told McDonough. “You represent Monroe very well and we’re thankful to have you on board and part of our team here.”