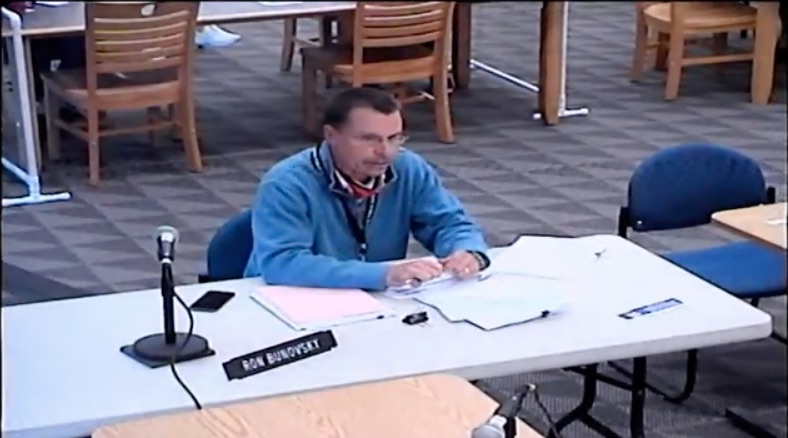 Finance Director Ronald Bunovsky Jr. goes over the budget at the Board of Education meeting Monday.

MONROE, CT — Ronald Bunovsky Jr., who serves as finance director for the town and the school district, was described by some Board of Education members as a “tiny Superball” bouncing tirelessly between the town and Board of Education, a “rockstar”, “a god” and like having legendary slugger Mickey Mantle in your lineup.

But school board members were discussing the newly created joint finance director position, not the person, at their meeting Monday night. Board members ultimately decided to approve a shared services agreement to move forward with the new structure.

The vote was 6 to 3, along party lines, with Democrats opposed due to the potential for split loyalties and other issues that could come with a future hire whenever Bunovsky leaves the role.

The Town Council anticipates taking action on the agreement at its next meeting on June 28.

When the school district’s interim finance director Frank B. Connolly finished his contract, town officials eventually decided to have Bunovsky, who was finance director for the town of Monroe, to temporarily handle both roles.

“I know there were some concerns,” Superintendent Joseph Kobza said. “I believe over the last year-and-a-half, we’ve seen many more significant advantages than disadvantages. To me, the biggest one in my perspective has been credibility and collaboration. I think for years there’s always been skepticism on both sides.”

Kobza used the last budget process as an example of the collaboration under Bunovsky. The Board of Education ended up with a spending increase just north of five percent.

“We haven’t seen numbers like that in a long time and I think it’s due to the trust built between the town and the Board of Education,” Kobza said.

The superintendent acknowledged the position would live beyond all of them. “I understand there are concerns over that,” Kobza said, “but there are clauses in there where all sides can back out if they’re unhappy with the arrangement and want to go back to two separate finance directors.”

Criticism of the position

Nick Kapoor, a board member, was the most vocal critic of creating the new position.

“To begin, this has nothing to do with Ron, or any of the people that are involved in this,” Kapoor said. “This is about the new position that we are trying to create.”

He said he wanted more data from similar districts, who have joint finance directors, and expressed his belief that the Board of Education’s attorney should have reviewed the agreement.

Kapoor also noted the proposed $140,000 salary for the new position is $15,000 lower than what the school board had budgeted for its finance director position, which was only for the school district.

The shared services agreement would save the town about $67,600, but Kapoor said Monroe arguably could use one more finance position on each side, which would negate those savings.

He contended it is too much work for one person to serve the town and school district, and that there could be conflicts with the chain of command when the first selectman and superintendent give contradictory orders.

According to the agreement, Bunovsky devotes 60 percent of his time to the Board of Education and 40 percent to the town’s municipal government.

“The staff on both sides have been great,” Bunovsky said. “It hasn’t been a perfect situation. There have been some bumps in the road. I expect things to normalize.”

Shannon Reilly, a board member, said will always be bumps in the road, “whether we have one director or two.”

The new org chart has the director of finance at the top. On the town side, the assistant director of municipal finance is next, followed by the accounting supervisor, whose direct reports are the accounts payable clerk, payroll clerk and part-time accountant.

The education side has the assist director of public school finance and the coordinator of business operations under the director, and an accounts payable specialist under them.

“In the past, we had finance directors for the town and Board of Education and they were not always on the same page,” Reilly said. “With Ron doing both, we have the checks and balances in place and the support staff.”

“The collaboration has been outstanding,” Kobza said.

Kapoor was joined by fellow Democrats, board members Jerry Stevens and Dr. Alan Vaglivelo in opposing the new position. Though like Kapoor, Stevens and Vaglivelo also took great pains to stress they were not criticizing Bunovsky.

“I’ve struggled with this,” said Stevens. “Ron, you know you are a rockstar. You are a god, so this is not about you Ron. But I am struggling with this whole process. I am not sure if I was Coke, I’d want to hire Pepsi’s finance guy to intermingle with me.”

Stevens marveled at how Bunovsky attends Board of Education and Board of Finance meetings, along with his office job — and how he was leaving Monday’s school board meeting early to attend a Town Council meeting.

“We all know that Ron is like a little, tiny Superball. He bounces,” Stevens said. “I don’t know if he sleeps. I’m still struggling with how this will work each way.”

Stevens said he likes Bunovsky, Kobza and First Selectman Ken Kellogg. “This is not about any of the three,” he said. “It’s about giving 100 percent to us.”

“I think it works great with Ron,” Vaglivelo said of the joint finance director position. “As I said before, having Ron is like having Mickey Mantle in your lineup.”

But Vaglivelo said his concern is over what happens if Bunovsky moves out of state, leaves for another job or retires. “How many people can do both jobs?” he asked.

The synergy is there

If the town is unable to find someone who can fulfill the dual role Bunovsky does after he leaves, Lane reminded her board they could always back out of the agreement and hire their own director.

Lane said “bullet point number nine” of the agreement, which allows either side to opt out, could also come into play if a finance director candidate was excellent for the town, but not for the school district — causing a stalemate.

She and fellow Republicans on the board showed an eagerness to approve the agreement and move forward.

“The synergy is there now,” said Vice Chairman George A. King III. “We’re taking advantage of that now.”

When the day comes to hire someone new to fill Bunovsky’s shoes, King said an expectation of the job could be the ability to work well with the town.

Kapoor said if the Board of Education could hire its own finance director, that person could also be someone who works well with the town.

“I’d like to see us approve this tonight,” said David Ferris, a board member. “There are always concerns and opinions. This could always be tweaked. There’s nothing saying this is in stone.”

Those voting in favor of the new position were Lane, Reilly, King, Christina Cascella, Ferris and Jeff Fulchino. Those opposed included Kapoor, Stevens and Vaglivelo.